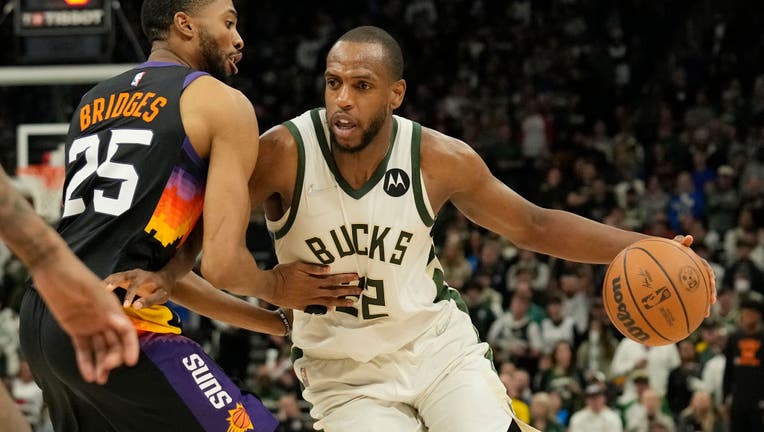 MILWAUKEE, WISCONSIN - MARCH 06: Khris Middleton #22 of the Milwaukee Bucks dribbles the ball against Mikal Bridges #25 of the Phoenix Suns during the second half at Fiserv Forum on March 06, 2022 in Milwaukee, Wisconsin. The Milwaukee Bucks defeated

MILWAUKEE - Khris Middleton scored a season-high 44 points, Jrue Holiday had 17 of his 24 points in the fourth quarter and the Milwaukee Bucks rallied to beat the short-handed Phoenix Suns 132-122 on Sunday.

Milwaukee outscored Phoenix 12-1 over the last three minutes to win in the Suns’ first visit since Giannis Antetokounmpo scored 50 points in a 105-98 Game 6 victory gave the Bucks their first NBA title in 50 years. In their only previous matchup this season, the Suns won 131-107 in Phoenix on Feb. 10.

The NBA-leading Suns were playing without their usual All-Star starting backcourt of Devin Booker and Chris Paul. Booker missed his third straight game due to the NBA’s health and safety protocols. Paul broke his right thumb Feb. 16.

Phoenix also was missing Cam Johnson, two days after he scored 38 points in a 115-114 victory over the New York Knicks. Johnson has a bruised right quadriceps.

The Bucks won their fourth straight as they completed arguably their toughest three-game stretch of the season. In each of those three games, they came from behind down the stretch.

Milwaukee beat Miami 120-119 on Wednesday night and Chicago 118-112 on Friday night. The Bucks erased a 14-point deficit in the final six minutes of the Heat game and trailed the Bulls by seven points at the start of the fourth quarter.

This time, the Bucks trailed by five in the final period and withstood the foul trouble of Antetokounmpo, who had 19 points, 13 rebounds and six assists in 31 minutes before fouling out with 1:12 left.

Serge Ibaka had 14 points and 10 rebounds for the Bucks. Jordan Nwora had 12 points and Grayson Allen added 10.

The Suns led 107-102 when Antetokounmpo went to the bench after picking up his fifth foul with 7:40 left.

But the Bucks outscored the Suns 18-11 in the four-plus minutes Antetokounmpo missed and owned a 120-118 lead when the two-time MVP returned to the floor with 3:23 remaining.

Crowder sank a 3-pointer to put the Suns back ahead with 3:13 left. Nwora missed a 3-point attempt on the Bucks’ next possession, but Antetokounmpo got the rebound and passed to Nwora, who hit a jumper to put Milwaukee back in front for good with 2:52 remaining.

The Bucks rolled from there. Middleton scored the game’s final seven points, including a 3-pointer that gave the Bucks a double-digit edge with 21.6 seconds left.

As part of its tour, ballet company RBT presented ''Swan Lake'' in Milwaukee. The performance came after the group changed its name from ''Russian Ballet Theatre.''

Tenth-ranked Wisconsin lost leading scorer Johnny Davis when he was injured on a flagrant foul early in the second half, and the Badgers missed a chance to clinch the Big Ten title outright by falling to Nebraska 74-73 Sunday.

Elm Grove fire crews were called to a home near Terrace and Watertown Plank after a public works employee responding to storm damage, noticed the home on fire.