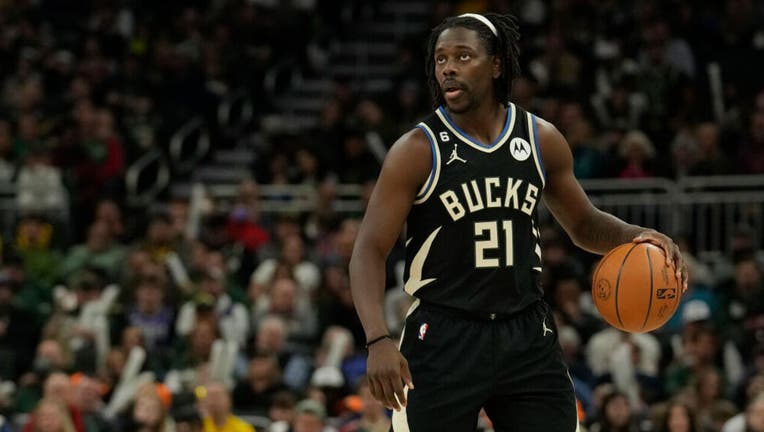 MILWAUKEE - Jrue Holiday scored a season-high 35 points to go along with 11 assists and the Milwaukee Bucks defeated the Indiana Pacers 132-119 on Monday without two-time MVP Giannis Antetokounmpo.

The Bucks played a third consecutive game without Antetokounmpo due to left knee soreness. The Pacers were missing leading scorer and NBA assists leader Tyrese Haliburton for a third straight game due to a left elbow sprain and a mild left knee bone bruise.

Holiday shot 13 of 19 overall and 5 of 8 from 3-point range while collecting his third straight double-double. The Bucks went 23 of 46 from beyond the arc and had their highest total of 3-point baskets this season.

Myles Turner returned for Indiana after missing three games with back spasms and scored 30 points for the Pacers, who lost their fourth straight. T.J. McConnell added a career-high 29 points — 25 in the first half — and had nine assists.

After falling behind by as many as 13, the Bucks pulled ahead 101-100 on Grayson Allen’s 3-pointer with 10:04 left in the game, the first time the Pacers had trailed since the opening quarter. Indiana responded with consecutive baskets from Andrew Nembhard and Jalen Smith.

The game went back-and-forth from there, as the first 4 1/2 minutes of the fourth quarter featured five lead changes.

Bobby Portis had 21 points and 11 rebounds for the Bucks. Brook Lopez had 19 points, Grayson Allen 17 and Nwora 14.

Buddy Hield scored 18 and Bennedict Mathurin added 12 for the Pacers.

Indiana led most of the way thanks to the fast start by McConnell, who entered the day scoring just 6 points per game.

During his 25-point first half, McConnell shot 9 of 9 from the floor, including 4 of 4 from 3-point range, and 3 of 3 from the free-throw line while playing 17 minutes. He also handed out six assists.