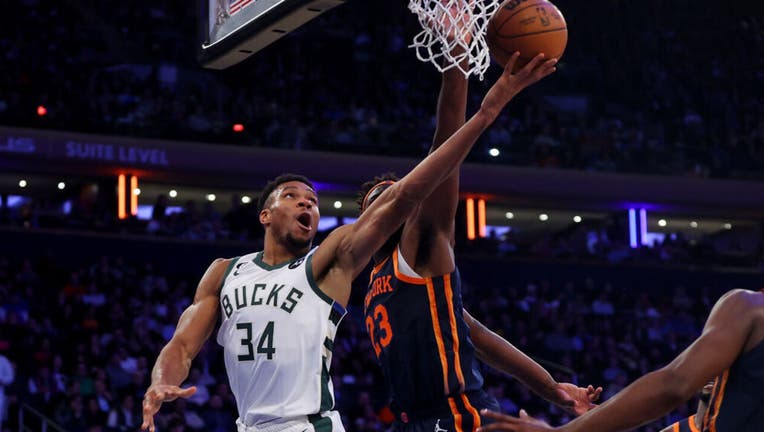 MILWAUKEE - Giannis Antetokounmpo had 37 points, 13 rebounds and seven assists, then Grayson Allen made the tiebreaking 3-pointer with 30 seconds left after his superstar teammate fouled out to lead the Milwaukee Bucks to a 109-103 victory over the New York Knicks on Wednesday night.

Allen made only one 3-pointer — a game after going 7 for 7 behind the arc in the first half of a victory over Dallas. But it was the only one the Bucks needed after Antetokounmpo had carried them for so long.

He fouled out with a minute left and the Bucks leading by two. Mitchell Robinson made one free throw and the Knicks got the rebound when he missed the second, leading to a free throw by Jalen Brunson that tied it with 47 seconds remaining.

After Allen's 3-pointer, RJ Barrett missed a 3 for the Knicks and the Bucks closed it out from the free throw line.

Jrue Holiday had 22 points, six rebounds and five assists for the Bucks, who had long stretches where Antetokounmpo was their only offense.

Barrett scored 26 points, Julius Randle added 18 and Brunson had 17 for the Knicks, who piled up 140 points in Detroit on Tuesday night but found things a whole lot different against the Bucks' top-notch defense. New York shot 42% from the field and 20% from 3-point range, plus a dismal 65% from the free throw line.

After a sloppy-shooting first half, when the teams combined to go 8 for 39 from 3-point range, Antetokounmpo provided some prettier play in the third quarter. The reigning Eastern Conference player of the week was 4 for 5 for nine points, including one layup where it appeared he'd driven too far under the basket on the right side after a spin move but was able to reach far enough to scoop it in from the left of the rim.