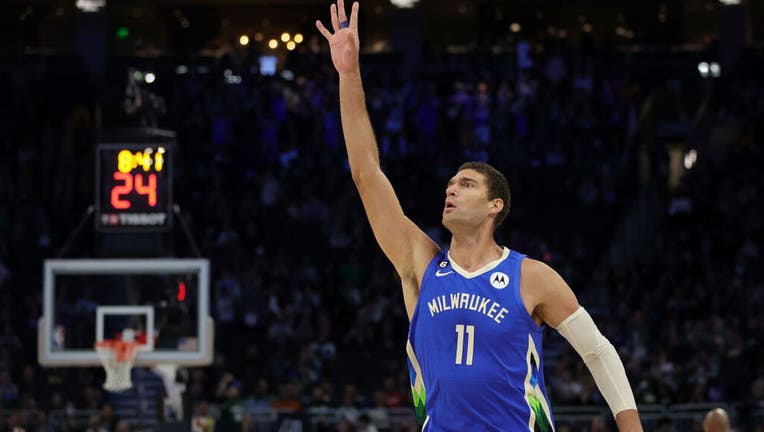 MILWAUKEE - Brook Lopez shot 7 for 9 from 3-point range and scored 29 points as the Milwaukee Bucks beat the skidding Cleveland Cavaliers 113-98 on Wednesday night.

The Cavaliers have lost five straight games since racing to an 8-1 start.

Giannis Antetokounmpo had 16 points, 12 rebounds and eight assists for the Bucks. Jordan Nwora had a season-high 21 points to help the Bucks outscore the Cavaliers 45-20 in bench points.

Donovan Mitchell and Darius Garland each had 23 points and Evan Mobley added 20 for the Cavaliers.

Mitchell returned after sitting out one game with a strained right ankle, but the Cavaliers played a second straight game without Jarrett Allen due to a non-COVID illness. Without their All-Star center on the floor, the Cavaliers were outrebounded 52-34 and outscored 21-6 in second-chance points.

The Bucks already are without Khris Middleton (wrist), Pat Connaughton (calf) and Joe Ingles (knee), who have yet to make their season debuts.

After trailing for most of the first two quarters, the Bucks grabbed a 61-60 lead at the half before breaking the game open in the third period.

Cleveland cut the lead to 100-91 with less than 7 1/2 minutes left in the game, but the Bucks scored the next nine points to seal the victory.

Bobby Portis had 10 points and 11 rebounds for the Bucks. Jevon Carter added 11 points and eight assists.