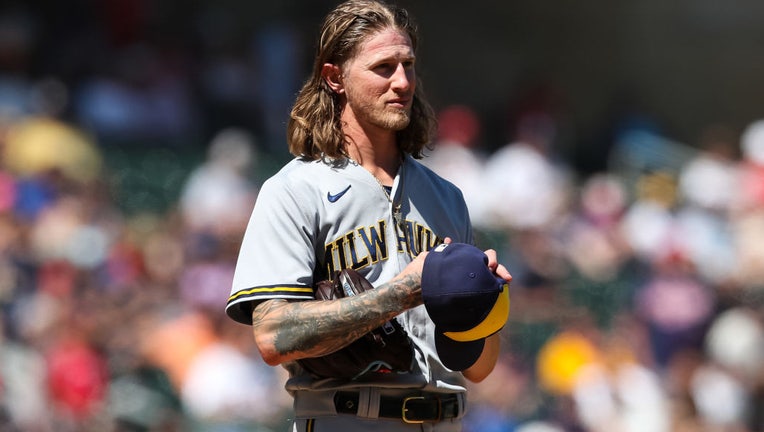 MINNEAPOLIS, MN - JULY 13: Josh Hader #71 of the Milwaukee Brewers looks on against the Minnesota Twins in the ninth inning of the game at Target Field on July 13, 2022 in Minneapolis, Minnesota. The Twins defeated the Brewers 4-1. (Photo by David Be

MINNEAPOLIS - Jose Miranda hit a game-ending, three-run homer against Milwaukee’s Josh Hader as the Minnesota Twins finally got a timely hit to beat the Brewers 4-1 on Wednesday.

Miranda’s third hit of the game traveled to the second deck in left field. The 23-year-old rookie knew it was gone as he threw his bat and looked at the Minnesota dugout before the ball landed. The Twins have five walk-off wins this season, and Miranda supplied one with a single against Baltimore’s All-Star closer Jorge López at the start of the month.

"He’s having a good time and he should," Minnesota manager Rocco Baldelli said. "When you hit a ball like that in front of a great crowd and you do it off, probably, one of the five most dominant pitchers in baseball — and I might be shortchanging Hader at this point — you can have some fun. He’s earned his fun right there."

Miranda, who broke out last season with 30 homers and a .344 average in 127 games between Double-A and Triple-A, has multiple hits in three of his last five games. He’s hitting .348 with four homers and 16 RBIs in his last 14 games.

"He threw me the first one, slider down, and I kind of knew he was going to come with the same pitch, but maybe for a strike," Miranda said. "He threw it where I wanted. Executed the plan."

"The slider wasn’t working the way it was," Hader said. "I fell behind in a few counts and I think at the end of the day you’ve got to stick with what you know. Falling behind 1-0 and trying to squeeze in a very errant pitch and he took a hold of it. You tip your cap and keep moving. Sometimes it goes your way. Sometimes it doesn’t."

Jhoan Duran (1-3) earned the first win of his career with one inning in relief, allowing one hit and a walk. Milwaukee had runners on first and second in the ninth inning, but Jace Peterson grounded into a 3-6-3 double play to end the threat.

Peterson homered earlier for the Brewers’ lone run. Milwaukee has lost five of its past seven games with three losses by two runs or less.

"We’ve kind of been in a dogfight here the last couple of weeks or so, a lot of close games," reliever Brad Boxberger said. "It’s a matter of grinding through these last couple in San Fran and go into the All-Star break hot."

Minnesota had plenty of chances to put the game away, but the Twins were 1 for 10 with runners in scoring position and left 13 runners on base through the first nine innings.

"We did a lot of good things, all the things you look for to win a game," Baldelli said. "At some point when you get some baserunners on, someone’s got to come up and whack one, and we got it."