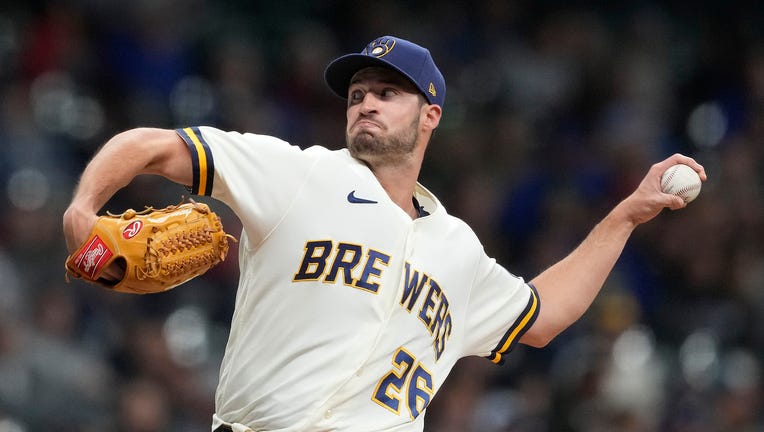 Aaron Ashby of the Milwaukee Brewers pitches against the Cincinnati Reds at American Family Field on May 03, 2022. (Photo by Patrick McDermott/Getty Images)

The same day, the team announced the signing of veteran relief pitcher Jake McGee to a one-year deal.

Ashby's five-year contract, which starts next year, would be worth $41.5 million over seven seasons if a pair of club options are exercised.

The deal, announced Saturday, could increase to $46 million over seven years through escalators for innings pitched and his finish in Cy Young Award voting.

"Throughout his time in our organization, Aaron has demonstrated a unique combination of persistence, character and talent," Brewers president of baseball operations David Stearns said in a statement. "He is establishing himself as one of the premier young pitchers in baseball, and we look forward to watching his continued growth and success."

A 24-year-old right-hander who made his major league debut in June last year, Ashby has a $704,500 salary this season.

His new deal includes a $1 million signing bonus payable within 30 days of the contract's approval by the commissioner's office.

Milwaukee has a $9 million team option with a $1 million buyout for 2028, the first season Ashby would have been eligible for free agency, and a $13 million option for 2027.

Ashby would get a $500,000 assignment bonus if traded. The deal also includes award bonuses and provides he gets a hotel suite on road trips.

McGee could help a bullpen that has been taxed this season because of injuries to Milwaukee’s starters.