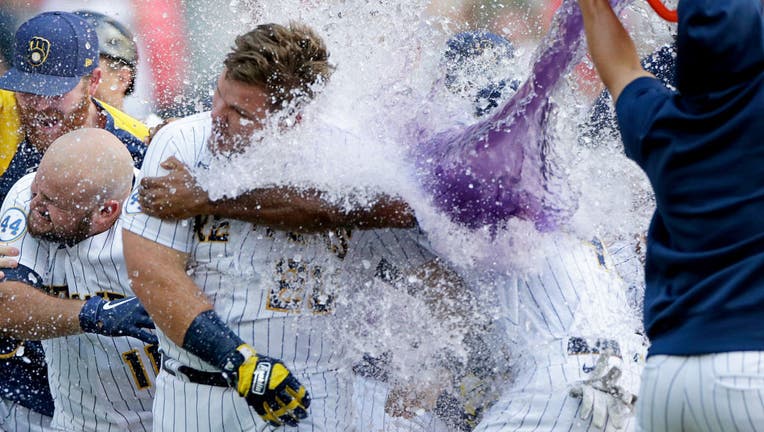 MILWAUKEE, WISCONSIN - SEPTEMBER 05: Daniel Vogelbach #20 of the Milwaukee Brewers gets a water and gatorade bath after hitting a walk-off grand slam in the ninth inning against the St. Louis Cardinals at American Family Field on September 05, 2021 i

MILWAUKEE - Daniel Vogelbach delivered a pinch-hit grand slam off Alex Reyes to cap a five-run rally in the ninth inning that gave the Milwaukee Brewers a 6-5 victory over the St. Louis Cardinals on Sunday.

Reyes (5-8) entered the game after the Brewers had loaded the bases off Giovanny Gallegos. Vogelbach hit a 1-0 pitch high above the outstretched arm of right fielder Dylan Carlson, who made a leaping attempt at the wall.

Vogelbach, who just got activated Wednesday after spending over two months on the injured list, was mobbed at home plate and got doused with the contents of a Gatorade bucket.

The NL Central-leading Brewers trailed 5-1 before starting their comeback against Giovanny Gallegos, who began the ninth after getting the final two outs in the eighth.

Jackie Bradley Jr. hit a leadoff double and scored on Luke Maile’s single to make it 5-2. Jace Peterson’s double and Eduardo Escobar’s walk loaded the bases with one out.

Then Vogelbach delivered his first homer since June 14.

Miguel Sanchez (2-0) pitched a scoreless ninth to earn the victory.

Tyler O'Neill had three hits, including a home run, for the Cardinals, who are chasing a wild-card spot. Harrison Bader added a two-run double. Starter Jon Lester allowed one run in just 5 1/3 innings.

Milwaukee’s Pablo Reyes celebrated his 28th birthday by hitting his first homer of the season. Reyes improved to 6 of 11 in his career against Lester.

O'Neill's homer in the seventh inning gave the Cardinals a 5-1 lead, but they failed to add to their lead despite continually putting runners on base while stranding 14.

The Brewers eventually made them pay.

Milwaukee loaded the bases in the eighth, but first baseman Paul Goldschmidt ended the threat by snaring a liner to rob Christian Yelich of an extra-base hit that could have brought home three runs.

The Brewers kept up the attack in the ninth and eventually broke through.