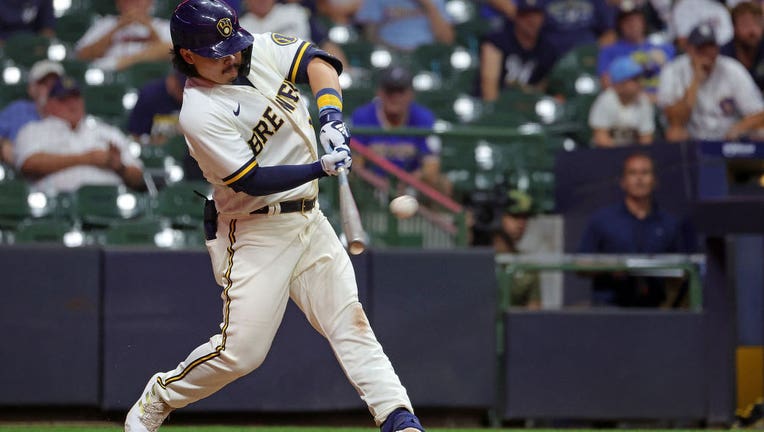 MILWAUKEE, WISCONSIN - AUGUST 29: Keston Hiura #18 of the Milwaukee Brewers hits a walk off two run home run against the Pittsburgh Pirates during the ninth inning at American Family Field on August 29, 2022 in Milwaukee, Wisconsin. (Photo by Stacy R

MILWAUKEE - Garrett Mitchell hit a tying home run in the eighth inning and Keston Hiura connected for a game-ending shot in the ninth as the Milwaukee Brewers rallied past the Pittsburgh Pirates 7-5 on Monday night.

Hiura, who replaced injured first baseman Rowdy Tellez in the fourth, launched a two-run homer off reliever Wil Crowe (5-8) that bounced off the top of the left-field wall. Willy Adames singled leading off the ninth for the Brewers, bringing Hiura to the plate with nobody out.

Hiura wasn't sure the ball had cleared the fence as he began to race around the bases.

"I had to ask the second base umpire if it was out," Hiura said.

Mitchell, starting his second game in the majors after being called up from Triple-A Nashville late last week, belted his first career homer, a two-run drive off Crowe with two outs in the eighth. That earned Mitchell a curtain call from the crowd, which included several family members. 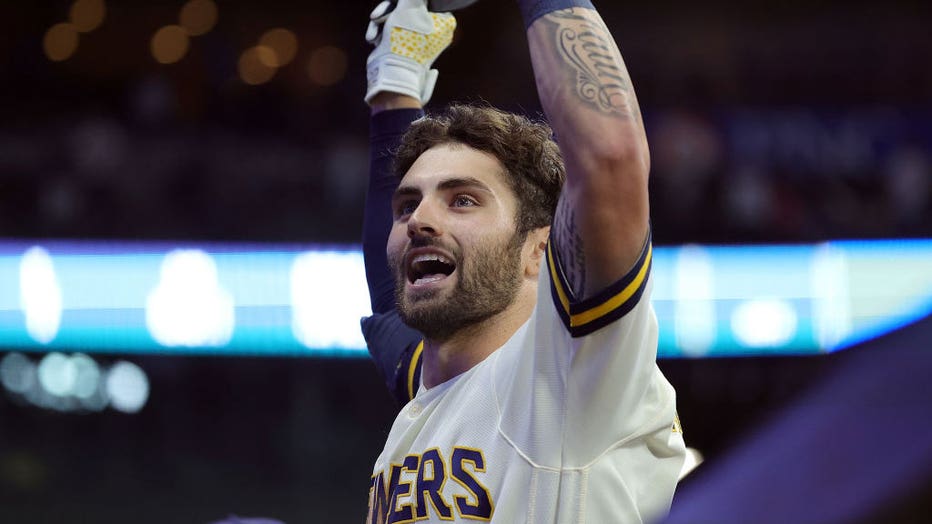 MILWAUKEE, WISCONSIN - AUGUST 29: Garrett Mitchell #5 of the Milwaukee Brewers celebrates a two run home run against the Pittsburgh Pirates during the eighth inning at American Family Field on August 29, 2022 in Milwaukee, Wisconsin. (Photo by Stacy

Mitchell said he wants to be trusted in big moments and won't shy away from those situations.

"When I went up there I was thinking, why not me? I like being in these type of situations and having a chance to help the team win. It’s a blessing," Mitchell said. "It was an awesome experience. I kind of blacked out for a second, but it was awesome."

The 2020 first-round draft pick also had a key hit in Sunday’s 9-7 win over the Chicago Cubs in his first major league start. Milwaukee's top prospect made his first appearance as a defensive replacement Saturday. He also walked, stole a base and scored the Brewers' first run on Monday.

Devin Williams (6-3) pitched a scoreless ninth for the win.

The Brewers, sitting just outside the NL wild-card picture, won their third straight and remained six games behind first-place St. Louis in the NL Central.

"You’ve seen what this team has done in previous Septembers," Hiura said. "When you’re chasing something, it definitely lights a fire under your butt and convinces you and persuades you to do a little bit extra."

Milwaukee snapped a five-game losing streak to the Pirates, who are last in the division at 48-80. Pittsburgh lost for 14th time in 17 games.

The Brewers broke through in the third against starter Bryse Wilson. Adames got it started with a run-scoring single. After Christian Yelich was cut down at the plate trying to score on Tellez’s single, Hunter Renfroe followed with a two-run double to give Milwaukee a 3-0 lead.

The Pirates stormed back in the fifth against Corbin Burnes. Jason Delay drove in Pittsburgh’s first run with a single and Oneil Cruz followed by lining a three-run homer into the right-field seats.

Cruz, who entered the game hitting .199, has hit six of his 11 home runs this season against the Brewers, and 14 of his 33 RBIs have also come versus Milwaukee.

Rodolfo Castro lined a solo home run off Burnes in the sixth to extend Pittsburgh’s advantage to 5-3.