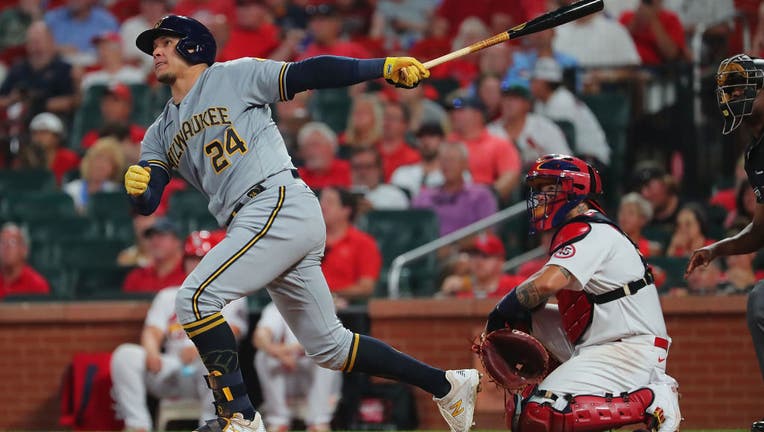 ST. LOUIS - Jackie Bradley Jr. scampered home from third base on a wild pitch in the 10th inning, and Avisail Garcia hit two homers to help the Milwaukee Brewers rally for a 6-4 win over the St. Louis Cardinals on Wednesday night.

Milwaukee has won 17 of its last 19 road games and extended its lead in the NL Central to 12 games over St. Louis.

Garcia hit a solo shot in the ninth with one out off closer Alex Reyes (5-6), tying the game at 3-all.

Bradley bolted home after Reyes (5-6) uncorked a wild pitch with two out. Christian Yelich followed with a run-scoring bunt single to third that pushed the lead to 5-3.

"It might be one of our best wins of the season, just because everybody contributed," Yelich said. "The bullpen, they all threw up zeroes. We were able to chip away as an offense. A great team win."

"We didn't help ourselves, it's as simple as that," Cardinals manager Mike Shildt said.

Josh Hader (4-2) picked up the win. Devin Williams recorded his third save in six chances. The Brewers had seven relievers pitch without allowing an earned run.

Yadier Molina got the Cardinals to within 6-4 with a run-scoring single in the 10th before Williams shut the door.

The Milwaukee bullpen did not allow an earned run after starter Freddy Peralta surrendered three runs over the first two innings before leaving with right shoulder discomfort.

"This goes to the top of the list," Milwaukee manager Craig Counsell said of the victory. "It was pretty special."

The Brewers improved to a major league-best 42-20 on the road this season.

Jack Flaherty was making his second start for St. Louis following a 10-week stint on the injured list with a left oblique strain. He gave up two runs on four hits and struck out eight in a 92-pinch stint. Flaherty tossed six shutout innings in a 6-0 win over Kansas City on Friday.

"I don't feel bad (enough) to miss my next start," Peralta said. "Everything is fine. A little inflammation. Nothing crazy."

Milwaukee climbed within 3-2 on solo homers by Adames and Garcia in the fourth and fifth innings after St. Louis raced to a 3-0 lead.

"This team is capable of winning all types of games," Yelich said. "With our pitching and the guys that we have, we're never really out of game."

The Brewers are 8-1 on a current season-high 10 game road trip, all against NL Central teams.

St. Louis third baseman Nolan Arenado was ejected in the bottom of the seventh inning. It was the fifth ejection of his career.

Counsell and catcher Omar Narvaez were each tossed in the ninth inning after disputing a called third strike. Counsell was on the bottom step of the dugout on his way to the clubhouse when Garcia hit his 23rd homer of the season.

"We're definitely not in the position we are now without him," Yelich said of Garcia. "He's been getting huge hits for us all year."

St. Louis sports a major league-best 353-245 record in August since the turn of the century. The Cardinals are 60-31 in August under manager Mike Shildt.

Cardinals: Placed RHP Justin Miller on the 10-day injury list with a right elbow ulnar nerve issue. The move is retroactive to Tuesday.

Thousands of Afghan refugees could be headed to Fort McCoy in western Wisconsin, and one West Allis-based agency is preparing to assist.

Laundry lessons: Get cleaner clothes and save energy

Before you put that next load of laundry in, the experts at Consumer Reports show you ways to get cleaner clothes and save energy at the same time.

The medical community is racing to study how effective COVID-19 vaccines are in children, and part of that work is centered in Wisconsin.