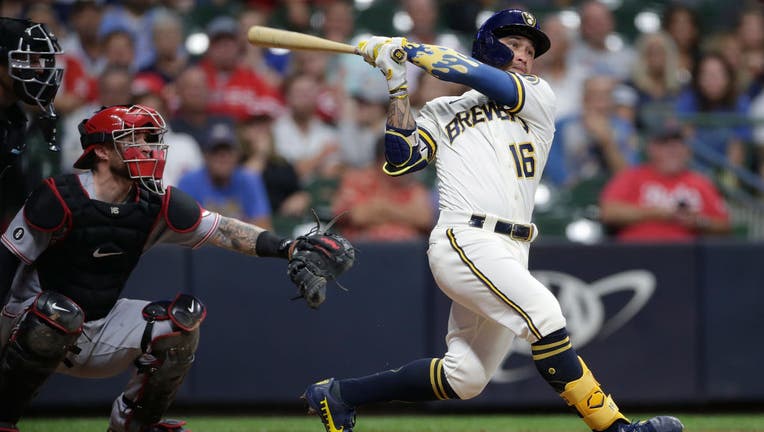 Kolten Wong #16 of the Milwaukee Brewers hits a two-run homer in the eighth inning against the Cincinnati Reds at American Family Field on August 24, 2021 in Milwaukee, Wisconsin. (Photo by John Fisher/Getty Images)

MILWAUKEE - Omar Narváez hit a tiebreaking double in a four-run seventh inning, Kolten Wong added a two-run homer in the eighth and the Milwaukee Brewers rallied past the Cincinnati Reds 7-4 on Tuesday night.

Milwaukee shortstop Willy Adames exited early with a leg injury, but the first-place Brewers hit a trio of sacrifice flies to win the opener of a three-game series between the top two teams in the NL Central.

They increased their division lead to 8 1/2 games over Cincinnati, which remained a game ahead of the Padres for the second NL wild card. San Diego lost 5-2 to the Los Angeles Dodgers.

Hunter Strickland (3-1) pitched a scoreless inning in relief of starter Corbin Burnes to help Milwaukee win for the 11th time in 14 games. Josh Hader earned his 27th save in 28 chances.

"We got to their bullpen and made them work," Brewers manager Craig Counsell said. "Any time you can make a team, after a good start from their starter, use a bunch of bullpen guys and come out with a win, especially in the first game of a series, that’s a satisfying win because you hope you took a piece of their bullpen as well."

Milwaukee’s comeback came after the Reds scored three in the fourth off Burnes, the Brewers' ace.

"Our offense had a great approach," Cincinnati manager David Bell said. "Got out in front and scored multiple runs off an excellent pitcher."

Reds starter Tyler Mahle held Milwaukee to one run before getting lifted in the sixth.

Milwaukee trailed 4-1 in the seventh but began the inning with three straight hits off reliever Michael Lorenzen (0-1). Wong’s run-scoring single cut the deficit to 4-2. After Lorenzen walked Jace Peterson to load the bases, Mychal Givens gave up consecutive sacrifice flies to Christian Yelich and Avisaíl Garcia.

Narváez then laced a double into the right-field corner to give the Brewers a 5-4 lead.

Wong belted a two-run shot in the eighth to make it a three-run advantage.

"It’s always good to take those games and hope you take the morale out of a team, but we’ve got two more big games coming up and they’re not going away and neither are we," Wong said.

The Brewers got on the board in the first against Mahle when Adames doubled with one out, moved to third on Yelich’s single and scored on Garcia’s sacrifice fly. Adames then exited due to left quadriceps discomfort in a move the team deemed precautionary.

"It’s not serious but it’s enough where it’s just coming up every day. We are just going to be cautious," Counsell said. "He won’t be in the lineup tomorrow. It’s not worth taking the risk."

In the fourth, the Reds loaded the bases with no outs. Mike Moustakas singled to tie it. Kyle Farmer’s base hit gave Cincinnati a 2-1 lead and Tucker Barnhart’s sacrifice fly made it a two-run margin.

Cincinnati extended the lead to 4-1 in the sixth when Moustakas led off with a double and scored on Barnhart’s single.

Mahle retired nine consecutive batters until walking Narváez and giving up a single to Luis Urias with two outs in the sixth. Lorenzen came on to retire Rowdy Tellez on a deep fly to left field.

Reds: Reinstated RHP Tejay Antone (right forearm strain) from the 10-day injured list and designated LHP Sean Doolittle for assignment. Antone relieved in the eighth but called a trainer to the mound as he faced his first batter and left the game. "He definitely felt something in his elbow," Bell said. "It's obviously very concerning." … Cincinnati reinstated RHP Michael Feliz (right elbow sprain) from the 60-day injured list and designated him for assignment.

Brewers: Placed infielder Eduardo Escobar on the 10-day injured list with a strained right hamstring and recalled infielder/outfielder Pablo Reyes from Triple-A Nashville. Counsell said he expects Escobar, who left Sunday’s game with the injury, to be out about two weeks. … RHP Freddy Peralta, on the 10-day injured list with right shoulder inflammation, could return when the team travels to San Francisco next week, Counsell said. …Garcia, who showed off a bruise on his left hand before the game from being hit by a pitch in St. Louis, got hit in the same spot again by Mahle in the third but remained in the game.

"We got about two weeks where we were pretty close to full strength. That doesn’t last," Counsell said when asked if the team has the depth to compensate for a rash of recent injuries.

Professional wrestler Paul Wight threw out the ceremonial first pitch. Wight, who stands 7-feet tall and weighs nearly 400 pounds, is best known for his tenure in the WWE where he wrestled under the name The Big Show.

NBA Finals MVP Giannis Antetokounmpo, dressed in a Brewers jersey, took in the game with his son, Liam. The Milwaukee Bucks star is now a part-owner of the Brewers, the team announced last week.

Brewers: Brandon Woodruff (7-7, 2.48) will make his 25th start of the season. Woodruff has allowed two earned runs over 11 2/3 innings in two starts against Cincinnati this season.

An 84-year-old woman was attacked at a Milwaukee grocery store, pushed down and robbed while wrapping up a trip to Pick 'n Save.

Video shows a reckless driver taking police on a dangerous pursuit through Glendale; the driver not even old enough for a permit.