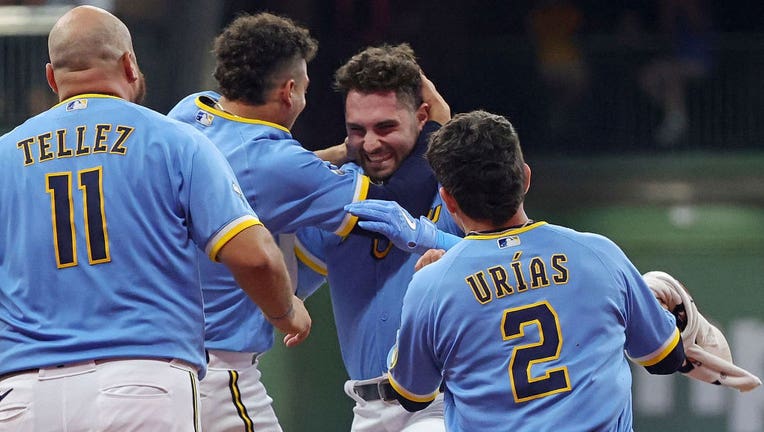 MILWAUKEE, WISCONSIN - SEPTEMBER 16: Garrett Mitchell #5 of the Milwaukee Brewers is congratulated by teammates following a game winning walk off single during the ninth inning against the New York Yankees at American Family Field on September 16, 20

MILWAUKEE - Garrett Mitchell is delivering a flair for the dramatic early in his major league career.

Mitchell hit a two-out RBI single in the ninth inning and the Milwaukee Brewers rallied from a five-run deficit to beat Aaron Judge and the New York Yankees 7-6 on Friday night.

Mitchell is batting just .182 since making his debut in late August, but he frequently has delivered in clutch situations such as this one.

"Those types of moments are things you’ve been working for your whole entire life as a kid," Mitchell said. "I’m just thankful to be in that moment and have that opportunity to help the team."

Judge went 2 of 4 and scored two runs but didn’t homer, keeping his season total at 57. He’s four off the American League record set by the Yankees’ Roger Maris in 1961, and his .311 average is eight points back of Minnesota's Luis Arraez as Judge chases a Triple Crown.

Judge beat out an infield hit in the first, reached on a check-swing single to center in the second and was intentionally walked for the 17th time this season in the third.

After falling behind 5-0 in the first two innings, the Brewers rallied to take a 6-5 lead in the eighth. Josh Donaldson's homer off Taylor Rogers (4-7) tied it in the ninth before the Brewers responded in the bottom half of the inning to complete their biggest comeback victory of the season.

"We got a whole lot of people dong really good stuff," Brewers manager Craig Counsell said. "It led to a really good win."

Milwaukee remained 1 1/2 games behind San Diego in the race for the NL's final wild-card spot. The Yankees' AL East lead fell to 5 1/2 games over Toronto.

Yankees manager Aaron Boone was ejected in the middle of the ninth for arguing the ball-strike calls that led to Miguel Andujar's strikeout. Oswaldo Cabrera followed Donaldson's tying homer with a double but was stranded at third after Andujar struck out looking and Kyle Higashioka flied out to center.

"It’s frustrating when there’s a non-competitive pitch that gets called (a strike)" Boone said. "But that's part of it. You've still got to find a way. They made a few more plays than us in the end."

Hunter Renfroe led off the ninth with a double off All-Star Clay Holmes (6-4) and took third when Kolten Wong grounded out. After Andrew McCutchen walked, Jace Peterson struck out and Victor Caratini walked to load the bases, Mitchell lined a single up the middle, ending a 4-hour, 10-minute game.

Mitchell's had plenty of big moments already in his career. He had a two-run single to help the Brewers beat the Cubs 9-7 in his MLB debut, hit a game-tying homer a day later and had a game-saving catch in a 7-6 win over the Cincinnati Reds on Sunday.

"You've just got to continue to look forward and look for those opportunities," the 2020 first-round pick from UCLA said. "For me going up there, just try to put a ball in play and be myself. That's what happened."

Given a 5-0 lead, Frankie Montas lasted 3 1/3 innings as his ERA with New York rose to 6.35. The Yankees are 3-5 in his eight starts since he was acquired at the trade deadline. He took a rotation spot vacated by the trade of Jordan Montgomery, and the St. Louis Cardinals are 7-1 in Montgomery’s starts.

Milwaukee's Willy Adames went 2 of 4 with a three-run homer and RBI double to spark the comeback.

His homer in the second inning was his 29th of the season, matching the most ever by a Brewers shortstop. Hall of Famer Robin Yount homered 29 times during his MVP season of 1982 while leading the Brewers to their lone World Series appearance.

Two innings later, Adames hit an RBI double that sailed over right fielder Oswaldo Cabrera, hit the warning track and bounced into the stands. Rowdy Tellez followed with a sacrifice fly that scored Christian Yelich with the tying run.

Adames also was at the plate when the Brewers took the lead in the eighth.

The Brewers had runners on the corners with two outs when Adames hit a grounder that Kiner-Falefa was unable to filed cleanly, allowing Keston Hiura to score the go-ahead run. Kiner-Falefa was charged with an error.

"That's one that I wish I had back," Kiner-Falefa said. "I cost us the game tonight. I need to come through next time."