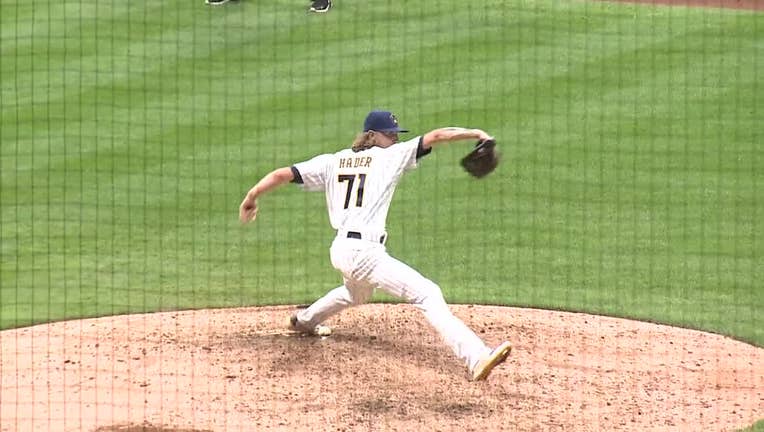 Whether they contend for the World Series title that has eluded this franchise throughout its existence could depend on how much help that staff gets from its lineup.

The Brewers have made four straight playoff appearances but haven’t reached a World Series since 1982 and have posted a 1-6 postseason record over the last three years.

"Going four years in a row, I feel like eventually we’ve got to get over the hump of winning a World Series," pitcher Brandon Woodruff said. "I think that’s a realistic goal."

Now they want to take the next step.

"We know we’re going to be a run prevention-oriented team," president of baseball operations David Stearns said. "We’re still built around our pitching staff. We’re built around our defense. That’s not going to change. But we also want to score a few more runs than we did last year, and we think some of the moves we’ve made will help us to do that."

"This is a pretty laid-back crew," McCutchen said. "Seems like I fit in pretty well. Guys come in, they know what they need to do to get ready. That lets you know the type of team that we have. They have expectations of things they need to accomplish."

While the strength of Milwaukee’s lineup is uncertain, the Brewers know they have quality pitching.

"The guys who are going to pitch most of our innings this year have done some pretty incredible things already," manager Craig Counsell said.

The Brewers open the season April 7 in Chicago against the Cubs.

Giannis Antetokounmpo scored 40 points and had a game-deciding block of Joel Embiid in the final seconds to lead the Milwaukee Bucks to a 118-116 victory over the Philadelphia 76ers on Tuesday night in a matchup of two of the Eastern Conference’s top teams.

Alex Biega totaled three assists and Cole Smith scored the game-winner to lead the Milwaukee Admirals to a 5-3 win over the Rockford IceHogs Tuesday, March 29 at BMO Harris Bank Center.

Milwaukee Brewers players are used to routine when it comes to baseball, even in the offseason, but this past offseason was a very different animal. The owners and players union spent most of it trying to work out a new collective bargaining agreement.