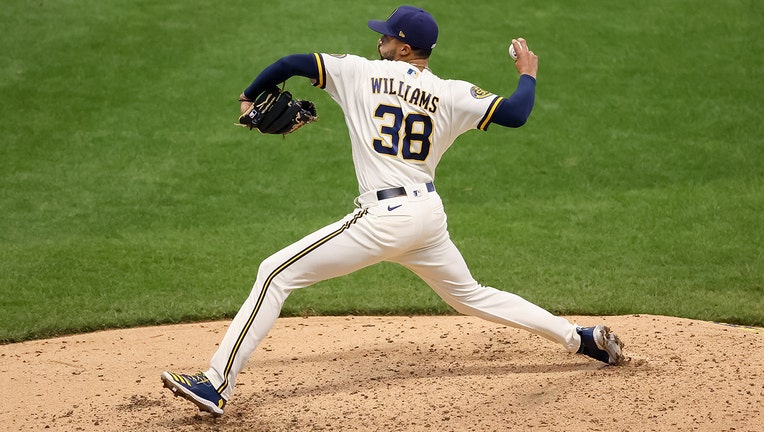 MILWAUKEE, WISCONSIN - SEPTEMBER 14: Devin Williams #38 of the Milwaukee Brewers pitches in the sixth inning against the St. Louis Cardinals during game one of a doubleheader at Miller Park on September 14, 2020 in Milwaukee, Wisconsin. (Photo by Dyl

The first and second teams, announced Wednesday on MLB Network, were determined by a combination of voting from fans and a decorated panel of media members, broadcasters, former players and other officials throughout the game.

He surrendered just a single earned run the entire season, which came in his second appearance on July 27 at Pittsburgh.

Williams was selected in the second round of the 2013 First-Year Player Draft. The graduate of Hazelwood West High School in Missouri committed to the University of Missouri before signing with the Brewers.

The full list of both first and second teams for 2020 can be found here.

A Philadelphia&nbsp;artist has created Miller Park using the names of every Milwaukee Brewers player in history.&nbsp;

The Milwaukee Brewers on Wednesday, Dec. 2 announced several roster decisions as the 2020-21 MLB offseason got underway.