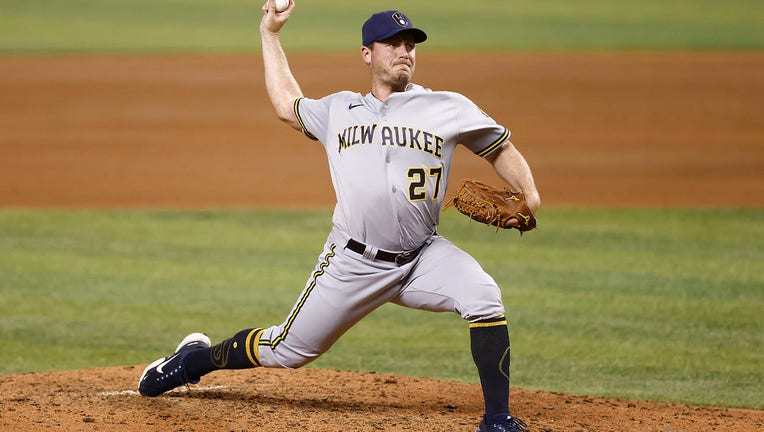 MIAMI, FLORIDA - MAY 07: Jordan Zimmermann #27 of the Milwaukee Brewers delivers a pitch during the seventh inning against the Miami Marlins at loanDepot park on May 07, 2021 in Miami, Florida. (Photo by Michael Reaves/Getty Images)

MILWAUKEE - Milwaukee Brewers pitcher Jordan Zimmermann retired Tuesday in his 13th season in the majors, ending a career in which he threw the first no-hitter in Washington Nationals' history and earned two All-Star selections.

The 34-year-old right-hander from Auburndale, Wisconsin, made two relief appearances for his home-state team this season and had a 0-0 record with a 7.94 ERA.

"I have had the joy of playing the game that I love for the past 15 years," Zimmermann said in a statement released by the Brewers. "I will forever be thankful to the Washington Nationals and Detroit Tigers for allowing me to live out this dream. It has been particularly special to be able to end it all playing for my hometown team, the Milwaukee Brewers.

"Thank you to all of my friends, teammates and family members who have been by my side throughout this incredible journey. I will miss the game greatly, but I’m ready for the new phase of my life."

After signing a minor league deal with the Brewers this year and failing to make the team’s initial major league roster, Zimmermann decided at the end of April to retire. He changed his mind a couple of hours later when the Brewers called to promote him to the big leagues after a flurry of injuries hit their pitching staff.

"I think I was retired for about two hours," Zimmermann said.

In his first outing with the Brewers, Zimmermann gave up five runs over 3 2/3 innings of relief in a 16-4 loss to the Los Angeles Dodgers. He fared much better in what ended up being his final major league outing, working two shutout innings Friday in a 6-1 loss to the Miami Marlins.

Zimmermann’s greatest success came with Washington, where his rise coincided with the Nationals’ emergence from perennial last-place team to regular playoff participant.

The Nationals were producing their second straight season of 100-plus losses when Zimmermann broke into the majors in 2009. He was a key part of Washington’s rotation when the Nationals won NL East titles in 2012 and 2014.

He went 19-9 with a 3.25 ERA and finished seventh in the NL Cy Young Award voting in 2013. He finished fifth in the Cy Young Award balloting the following season after going 14-5 with a 2.66 ERA. He threw a no-hitter in a 1-0 victory over the Marlins on Sept. 28, 2014, the last day of the regular season — a gem that was preserved by a diving catch by outfielder Steven Souza Jr. for the final out.

Zimmermann signed a five-year, $110 million contract with the Detroit Tigers after the 2015 season but couldn’t come close to matching the success he produced in Washington.

Finishing his career in Milwaukee this season enabled the 2007 second-round draft pick from Division III school Wisconsin-Stevens Point to become the 11th Wisconsin native to play for the Brewers.

More children may soon be eligible to get the Pfizer COVID vaccine.