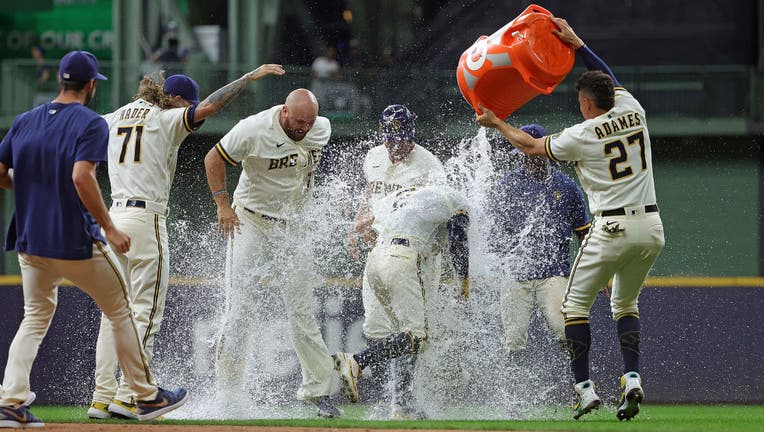 Luis Urias #2 of the Milwaukee Brewers is congratulated by teammates after hitting a walk off game winning sacrifice fly during the ninth inning against the Minnesota Twins at American Family Field on July 26, 2022 in Milwaukee, Wisconsin. (Photo by

MILWAUKEE - The Milwaukee Brewers have displayed a flair for the dramatic ever since returning from the All-Star break.

Luis Urías delivered a game-ending sacrifice fly in the ninth inning to bring home Andrew McCutchen as the Brewers edged the Minnesota Twins 7-6 on Tuesday night. The NL Central-leading Brewers have gone 4-1 since the All-Star break. In three of those wins, they were tied or behind in the eighth inning or later.

"It's certainly been a dramatic homestand from that perspective," Brewers manager Craig Counsell said. "You fight to get the wins. This is an example of home games, really, just being at home and having that last shot."

McCutchen started the winning rally with a one-out single off Tyler Duffey (2-4), who then walked Kolten Wong and Hunter Renfroe to load the bases. Urías followed with a fly ball, and McCutchen slid home head first well ahead of right fielder Alex Kirilloff's throw.

This came four nights after Urías hit a walk-off single in the 13th inning of the Brewers’ 6-5 victory over the Colorado Rockies. He also came up with the bases loaded in the bottom of the ninth Monday and hit a sinking liner that Colorado second baseman Brendan Rodgers snared for the final out in the Brewers' 2-0 loss.

"Those situations are kind of important, but I just try to go out there and do the same thing I'm capable of and pretty much put the barrel on the ball and keep it simple," Urías said.

The Rockies series also featured a 10-9 Brewers triumph in which Milwaukee erased an 8-7 deficit by scoring three in the eighth.

Urías homered earlier Tuesday and Renfroe and Wong also went deep. Renfroe has homered in four of the Brewers’ five games since the All-Star break.

Gio Urshela hit a three-run homer and Byron Buxton added a solo shot for the Twins, his 24th.

Buxton led off the game with a 449-foot drive well over the left-field wall against Ethan Small, who was making his second career start. Buxton had missed the Twins’ two-game sweep of the Detroit Tigers to rest a right knee that received a platelet-rich plasma injection Wednesday.

This game eventually came down to the bullpens.

Milwaukee's Josh Hader (1-4) retired the side in order in the top of the ninth to gain a measure of revenge against the Twins.

Hader allowed a game-ending, three-run homer to Jose Miranda in a 4-1 loss at Minnesota on July 13. That was one of the lowlights in Hader’s slump just before the All-Star break, as the four-time All-Star gave up 12 runs in a stretch of six games.

That came after All-Star reliever Devin Williams retired the side in order in the eighth for his 28th consecutive scoreless appearance.

"It's not just reputation," Twins manager Rocco Baldelli said. "They go out there, you can see it, that's the kind of game they play. They bank on winning games like that. We need to do the same. We need to find ways to win games like that, too. We have, but I'd like to make it our calling card as well. Be able to go out there and just hold the opposition to basically zero late in the game and win."

Minnesota didn't get the same type of relief Tuesday.

Jhoan Durán walked two batters, gave up a hit and threw a wild pitch in the eighth before working out of a bases-loaded jam by getting Willy Adames to strike out looking at a 3-2 offering.

Duffey wasn't as fortunate in the ninth and ended his string of 13 straight scoreless appearances while the Brewers continued their recent knack for producing late-inning magic.

"We did it the hard way for sure," Counsell said. "But it paid off."

Lee batted .357 with a .462 on-base percentage, 25 doubles, 15 homers and 55 RBIs in 58 games with Cal Poly this season. He won the Brooks Wallace Award given annually to the nation's top college shortstop.

Twins: 1B Miguel Sanó returned to action Tuesday after missing nearly three months with a torn meniscus in his left knee. ... OF Max Kepler is day to day with a midly displaced fracture of a pinkie toe.

Brewers: RHP Justin Topa (forearm) began a rehabilitation assignment with Triple-A Nashville on Tuesday. He threw eight pitches and retired the side in order in the one inning he worked.

Chris Archer (2-4, 3.41 ERA) starts for the Twins and Corbin Burnes (7-4, 2.20) pitches for the Brewers as this two-game series ends Wednesday afternoon with a matchup of right-handers.