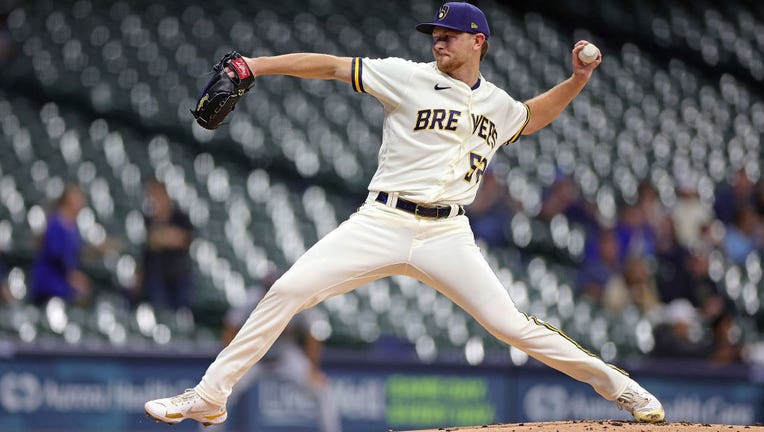 MILWAUKEE, WISCONSIN - OCTOBER 04: Eric Lauer #52 of the Milwaukee Brewers throws a pitch during the first inning against the Arizona Diamondbacks at American Family Field on October 04, 2022 in Milwaukee, Wisconsin. (Photo by Stacy Revere/Getty Imag

MILWAUKEE - Eric Lauer pitched six innings of no-hit ball before getting removed from the game in the Milwaukee Brewers' 3-0 victory over the Arizona Diamondbacks on Tuesday night.

Lauer said he didn’t realize he had a no-hitter going until someone told him after he’d left the game. Lauer assumed the error he committed on a fourth-inning bouncer from Jake McCarthy had been ruled a hit.

"I just didn’t look, I guess," Lauer said. "It was in the back of my mind that there weren’t a ton of guys on base. I’d walked a few but I didn’t really know. I was just trying to put up zeroes man, just trying to finish the year with some zeroes."

Milwaukee’s no-hit bid provided at least some sense of drama to an otherwise meaningless game. The Brewers were eliminated from playoff contention Monday night when the Philadelphia Phillies defeated the Houston Astros 3-0 t o clinch their first postseason berth since 2011.

Lauer (11-7) struck out seven, walked four and committed an error while throwing 97 pitches. Lauer’s highest pitch count of the season was 108, in a 2-1 loss at San Francisco on July 16.

"This one definitely feels like I have a lot to build off of this offseason and moving forward," Lauer said.

Jake Cousins took over for Lauer at the start of the seventh and allowed Josh Rojas’ leadoff single to right center. Cousins retired the next three batters and pitched around a one-out walk in a scoreless eighth inning.

Strzelecki retired the side in order in the ninth to earn his first career save.

"You dream about things like that," Strzelecki said. "It feels good. I hope to just build on it for next year."

Milwaukee's Luis Urías went 3 of 4 with a homer and an RBI double.

Garrett Mitchell also homered as Milwaukee gained a measure of revenge against Zac Gallen, who allowed only two hits and one walk over seven innings in a 5-1 victory over the Brewers exactly a month ago. That Sept. 4 outing marked Gallen's sixth consecutive start in which he worked at least six innings without allowing a run, tying a major-league record.

"I definitely feel like I had things to prove on a lot of fronts - the health front, the talent front, all the things of that nature," Gallen said. "It's kind of funny, you have a down year and soon you're labeled injury-prone, whatever you want to go and get out there. I felt like I had to come here this year and prove a lot of people wrong. Kind of the mission this year was to make sure people understand last year was more of a fluke than anything."

The Brewers failed to score in the first inning despite forcing Gallen to throw 36 pitches. But they wasted no time getting to him in the second inning. Mitchell sent Gallen’s first pitch of the inning over the right-field wall.

"It was a great job by the offense today to get his pitch count up early," Mitchell said.

Urías added a solo shot to left center in the third inning. Urías’ 16th homer of the season extended his hitting streak to 14 games, a career high.

The Brewers extended the lead to 3-0 when Urías' two-out double brought home Jace Peterson in the fifth. Urías also singled in the eighth.