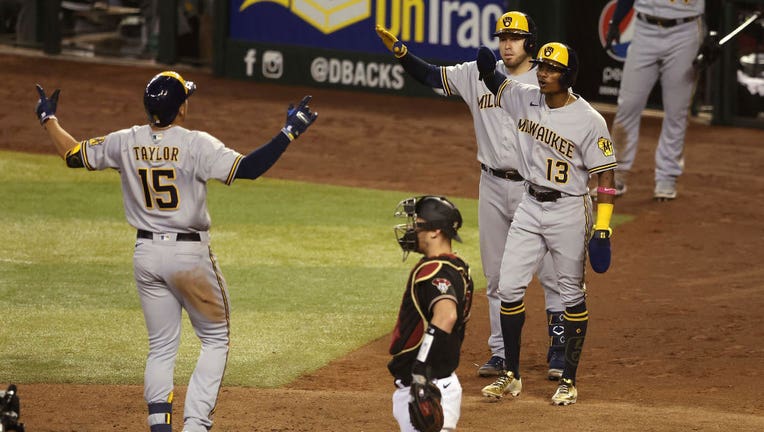 PHOENIX, ARIZONA - SEPTEMBER 03: Tyrone Taylor #15 of the Milwaukee Brewers celebrates with Esteury Ruiz #13 after hitting a two-run home run against the Arizona Diamondbacks during the 10th inning of the MLB game at Chase Field on September 03, 2022

Taylor hit a two-run homer in the 10th inning after Tellez's pinch-hit tying solo homer in the ninth, lifting the Milwaukee Brewers to an 8-6 win over the Arizona Diamondbacks on Saturday night.

"We just always, we just never feel like we’re out of the game," Taylor said. "We’re always ready to go battle. It’s well known that we get more hits later in the games, so put two and two together, it’s going to happen."

The Brewers have been pulling off comebacks all season as they try to clinch a fifth straight playoff berth.

They needed another after Corbin Burnes' uneven start put them down 5-4 through six innings.

Andrew McCutchen pulled the Brewers within 6-5 with a run-scoring single in the eighth inning after an out call at the plate was overturned on review. Tellez then tied it with his 28th homer of the season in the ninth, a solo shot off Ian Kennedy.

Taylor, who also hit a solo homer in the fifth inning, put the Brewers up 8-6 with his homer off Joe Mantiply (2-5). Devin Williams (6-3) worked a perfect ninth and Taylor Rogers struck out two and fielded Stone Garrett's hard grounder in the 10th to close out his 30th save.

"I don’t know if that’s the formula we want to keep going with, but obviously Rowdy had a huge hit, Tyrone had some huge hits," Brewers manager Craig Counsell said. "We just kept battling."

Daulton Varsho homered and had two RBIs for the Diamondbacks. Arizona rookie Corbin Carroll hit a run-scoring single in the first inning to become the fourth Diamondbacks player — first since 2009 — to have six RBIs in his first five big league games.

Arizona didn't score after a three-run sixth inning and went 4 for 15 with runners in scoring position.

"These are the games that kind of eat at you," Diamondbacks manager Torey Lovullo said.

Burnes has been on a downward trend the past couple of weeks. The reigning NL Cy Young Award winner arrived in the desert after allowing nine earned runs in 9 2/3 innings in consecutive starts against the Dodgers and Pirates.

The hard-throwing right-hander struggled with his command early against the Diamondbacks, needing 53 pitches to get through the first two innings.

Varsho hit a sacrifice fly in the second inning and launched a solo homer to the pool deck in left-center in the fifth.

Cooper Hummel chased Burnes with a two-out, run-scoring double in the sixth, then Geraldo Perdomo and Josh Rojas each had bloop run-scoring singles off Brad Boxberger to put Arizona up 6-4.

Burnes allowed five runs on eight hits in 5 2/3 innings. He struck out five to join Teddy Higuera (1986-87) and Yovani Gallardo (four times) as the only Milwaukee pitchers with 200 strikeouts in a season.

"I felt good, velocity was good, movement on my stuff was good," Burnes said. "This was one where I was happy with 85% of my pitches, but the other 10% I got behind and they got some pitches they could hit."