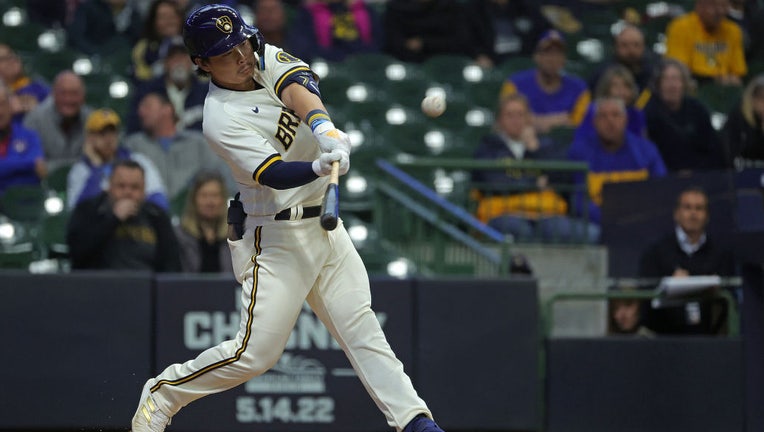 MILWAUKEE, WISCONSIN - APRIL 20: Keston Hiura #18 of the Milwaukee Brewers hits a three run home run during the seventh inning against the Pittsburgh Pirates at American Family Field on April 20, 2022 in Milwaukee, Wisconsin. (Photo by Stacy Revere/G

Woodruff (2-1) gave up just one hit, a one-out single by former teammate Daniel Vogelbach in the sixth.

After pitching five shutout innings in a win over St. Louis in his last outing, Woodruff struck out nine and walked two in six scoreless innings to beat the Pirates. The two-time All-Star struck out Bryan Reynolds three times and Ben Gamel and Josh VanMeter twice each.

"Warming up in the bullpen before the game, I was a little worried. It was like, ‘Man, it’s not good today,'" Woodruff said. "You just get in the game and go from there. You figure it out. Just being able to throw the offspeed for strikes is huge for me in any game, and I think I was able to do that today and then get back to the fastball."

Tellez gave the NL Central champions a 1-0 lead with a home run in the second inning. He fouled off five pitches from Mitch Keller (0-3) before hitting a 96 mph fastball 394 feet.

Keller held Milwaukee to one run on four hits in 5⅓ innings, striking out seven. He had given up eight earned runs in 7⅔ innings in his first two starts.

"It's been since spring training since I've gotten results and I feel like I've been throwing the same stuff, maybe a little bit different sequencing here today, more fastball heavy," Keller said. "But to finally get the results is very relieving. Just finally got a good one, now let's roll."

Manager Derek Shelton said that if Keller "pitches like this the rest of his career, I'll be one of the happiest human beings alive."

Keston Hiura extended Milwaukee’s lead to 4-0 with a three-run homer in the seventh. His 400-foot shot to the opposite field in right came off Miguel Yajure.

Since 2019, when he entered the big leagues with Milwaukee, Hiura has 11 homers against Pittsburgh, tied with four other players for most in the majors.

Pittsburgh cut the lead to 4-2 in the eighth on a two-run single by Ke’Bryan Hayes off Devin Williams.

Pittsburgh scored only five runs in the three-game series.

"It was probably more than quality starts," Brewers manager Craig Counsell said. "They’re giving up one or two runs at the most and that really puts you in a good position to win and make everything much harder for them, whether it’s pitching decisions or every pitch a starter has to make under pressure or trailing or in a tie game."

"We didn’t score a ton of runs, but we scored enough and we got some big home runs this series and we got them in the right spots," he said.

Bucks fans gear up for game 2 of the NBA playoffs.

Many times, art imitates life. Two artists. Brad Geers and Mitchell Kawell, use the Milwaukee Bucks as inspiration, and the artwork speaks for itself.