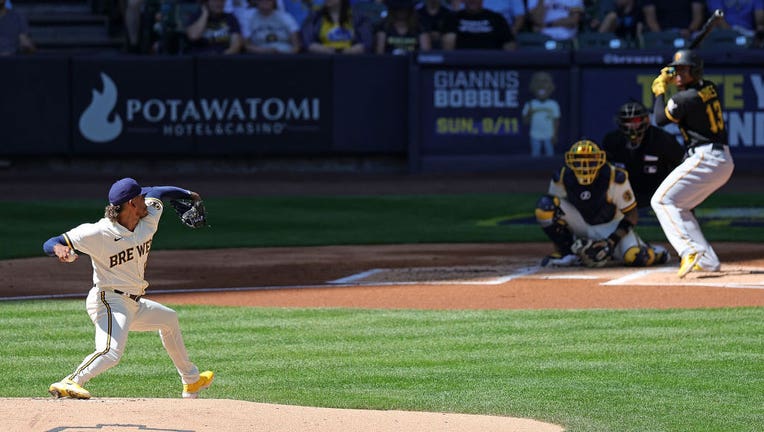 MILWAUKEE, WISCONSIN - AUGUST 31: Freddy Peralta #51 of the Milwaukee Brewers throws a pitch to Ke'Bryan Hayes #13 of the Pittsburgh Pirates during the second inning at American Family Field on August 31, 2022 in Milwaukee, Wisconsin. (Photo by Stacy

MILWAUKEE - Keston Hiura and Luis Urías each hit an RBI single during Milwaukee's four-run seventh inning, and the Brewers beat the Pittsburgh Pirates 6-1 on Wednesday.

Willy Adames had a run-scoring double as Milwaukee won for the fourth time in five games. Freddy Peralta pitched five effective innings, and Taylor Rogers (3-6) got four outs for the win.

Ben Gamel homered for last-place Pittsburgh, which had won two of three. Kevin Newman had two of the Pirates' five hits.

Pittsburgh jumped in front on Gamel's two-out drive to right-center in the fourth. It was his seventh homer of the season.

But Adames doubled home Tyrone Taylor in the fifth, and Milwaukee went ahead to stay on Omar Narváez's run-scoring groundout against Miguel Yajure (1-1) in the sixth.

Hunter Renfroe sparked Milwaukee's big seventh with a one-out single. Renfroe advanced on Kolten Wong's walk and scored on Hiura's single. Urías followed with an another run-scoring single for a 4-1 lead.