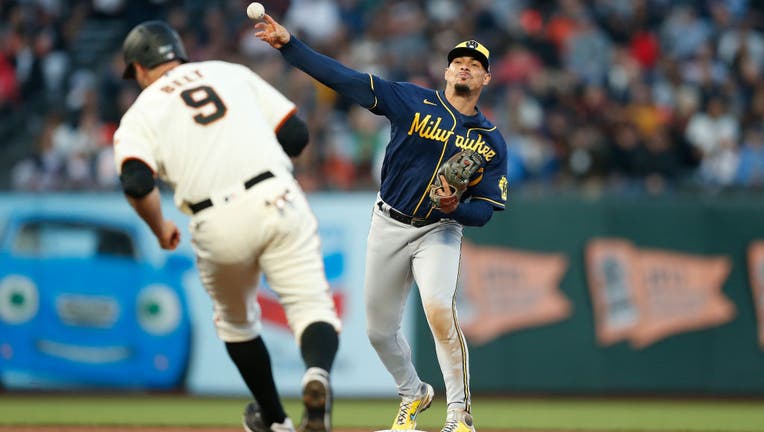 SAN FRANCISCO, CALIFORNIA - JULY 14: Willy Adames #27 of the Milwaukee Brewers gets the out at second base of Brandon Belt #9 of the San Francisco Giants in the bottom of the fourth inning at Oracle Park on July 14, 2022 in San Francisco, California.

Pinch-runner Christian Yelich scurried home for the winning run in the 10th inning on an infield single by Davis that pitcher Camilo Doval couldn't secure on the grass in front of third, and the Milwaukee Brewers held off the Giants 3-2 on Thursday night.

"That drains you. His pitch count was kind of already climbing and for him to have that AB where you feel like you're making good pitch after good pitch and he's just getting a piece of it, it definitely can take it out of you," Brewers starter Corbin Burnes said of the efforts by Davis. "Good job on his part he had a great game, had a good knock, scored a run for us. That was good to see."

Doval (3-5) allowed a one-out walk to Rowdy Tellez in the 10th with Yelich in to start at second base in extra innings. Doval had worked out of a jam an inning earlier when Hunter Renfroe hit a two-out double, but Victor Caratini flied out to left.

Burnes struck out 10 pitching into the eighth inning, yet settled for a no-decision as the first-place Brewers won for just the second time in five games and third time in eight. Still, he felt good about his first-half numbers while determined to improve his execution of pitches.

Burnes, the shaggy-haired former star pitcher at tiny mid-major Saint Mary's College in the East Bay suburbs, notched his seventh start this season with double figures strikeouts. He allowed one run on four hits with three walks over 7 1/3 innings.

It felt like a playoff matchup between two reigning division champions — and Brewers manager Craig Counsell also pointed to the gritty at-bat by Davis because it got the Brewers into the Giants' bullpen sooner.

"That's the kind of at-bat honestly that has maybe an affect for the whole series because it turned out to be a long bullpen game," Counsell said. "Great at-bat and then he got rewarded and just put a ball in play to get the winning run."

The right-hander started the eighth by giving up Brandon Crawford's single to shallow left. After striking out Joey Bart, Burnes walked LaMonte Wade Jr. and his night was done. Hoby Milner relieved with runners on first and second.

Austin Slater grounded into a force at third that got Crawford out before Thairo Estrada was hit by a pitch in his right foot to load the bases for pinch-hitter Darin Ruf, who flied out to right to leave the bases loaded.

Milner got the first out of the ninth then Trevor Gott (2-2) entered and struck out David Villar before Mike Yastrezemski struck out. Devin Williams recorded the final three outs for his sixth save to finish the 3-hour, 52-minute game.

Burnes outdueled Rodón, who surrendered three straight singles to start the second before striking out the side.

With one out in the eighth, the Giants challenged a single by Jonathan Davis that he had beaten shortstop Crawford's throw. The call was overturned on replay review for the second out then Dominic Leone retired McCutchen on a called third strike.

The Brewers, who won 50 road games last season and are now 29-21, won three of four in the Giants’ waterfront ballpark last year. They improved to 4-5 this year against the NL West.

Brewers: LF Yelich, scratched with mid-back tightness Tuesday at Minnesota, hit in the cage and was going through a full pregame routine before his appearance in the 10th. "He's making progress for sure," Counsell said.

Giants: 1B Brandon Belt played designated hitter for a third straight game as he nurses a knee issue but came out early. Belt did groundball work before the game with a machine in front of the Giants' dugout. ... LHP Jose Alvarez was transferred to the 60-day injured list as he deals with inflammation in his pitching elbow. Manager Gabe Kapler said Alvarez would receive a second opinion for the injury and the expected course of recovery is through rehab.

Left-hander Jake McGee was placed on unconditional release waivers after being designated for assignment Saturday.

The Giants claimed LHP Aaron Fletcher off waivers from the Pirates and optioned him to Triple-A Sacramento.

RHP Brandon Woodruff (7-3, 4.01 ERA) takes the mound for Friday's game of the four-game weekend series with the Brewers going 8-4 in his starts so far, and will pitch opposite lefty Alex Wood (6-7, 4.43). He is seeking back-to-back winning outings for the third time this season.