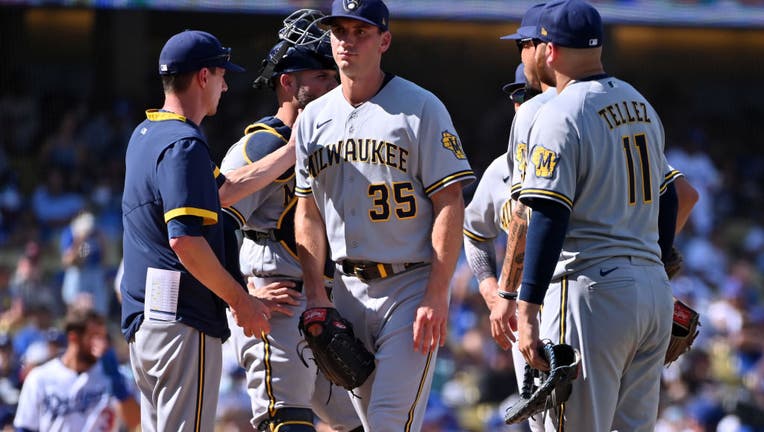 LOS ANGELES, CALIFORNIA - OCTOBER 03: Brent Suter #35 of the Milwaukee Brewers is relieved in the sixth inning after giving up an RBI single during a game against the Los Angeles Dodgers at Dodger Stadium on October 03, 2021 in Los Angeles, Californi

Milwaukee’s bullpen depth has been a concern since Williams punched a wall and broke his throwing hand the night the Brewers clinched the NL Central title.

Atlanta also released its NLDS roster ahead of Friday's series opener, and the Braves' bullpen won’t have Chris Martin or Richard Rodriguez. Martin had been dealing with an elbow injury but was activated from the injured list in mid-September. Rodriguez, acquired from Pittsburgh at the trade deadline, has allowed seven runs over 12 innings since Sept. 1.

The Braves also added Terrance Gore to their roster. The speedy outfielder has never played for Atlanta, appearing in 102 regular-season games in seven seasons — most recently for the Dodgers in 2020. Gore filled a key pinch-running role for the Kansas City Royals during their runs to the AL pennant in 2014 and World Series title in 2015.

Brewers first baseman Rowdy Tellez, who was activated from the injured list Saturday after missing a few weeks with a knee injury, is on the roster.

Brewers pride is beaming across Milwaukee ahead of the NL Division Series. The Deer District is welcoming fans, hoping to be a celebration site again.