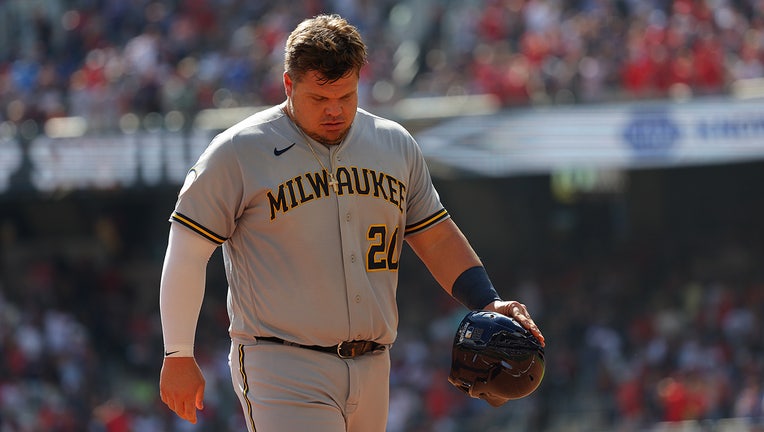 ATLANTA, GEORGIA - OCTOBER 11: Daniel Vogelbach #20 of the Milwaukee Brewers reacts during the fifth inning in game 3 of the National League Division Series at Truist Park on October 11, 2021 in Atlanta, Georgia. (Photo by Kevin C. Cox/Getty Images)

ATLANTA - Joc Pederson kept enhancing his "Joctober" nickname with a three-run, pinch-hit homer and the Atlanta Braves shut down Milwaukee once again, beating the Brewers 3-0 on Monday to take a 2-1 edge in the NL Division Series.

In a matchup dominated by pitching, Ian Anderson and the Braves bullpen combined on a five-hitter and won by a 3-0 score for the second straight game.

Pederson's homer in the fifth inning was his second of the series. Each drive came as a pinch-hitter against Adrian Houser. Pederson singled as a pinch-hitter in his only other at-bat in this series, and has driven in four of Atlanta's seven runs.

Pederson has hit 11 postseason home runs overall and helped the Los Angeles Dodgers win the World Series last year with his longballs. He then signed as a free agent with the Chicago Cubs in the winter and was traded to Atlanta in July. 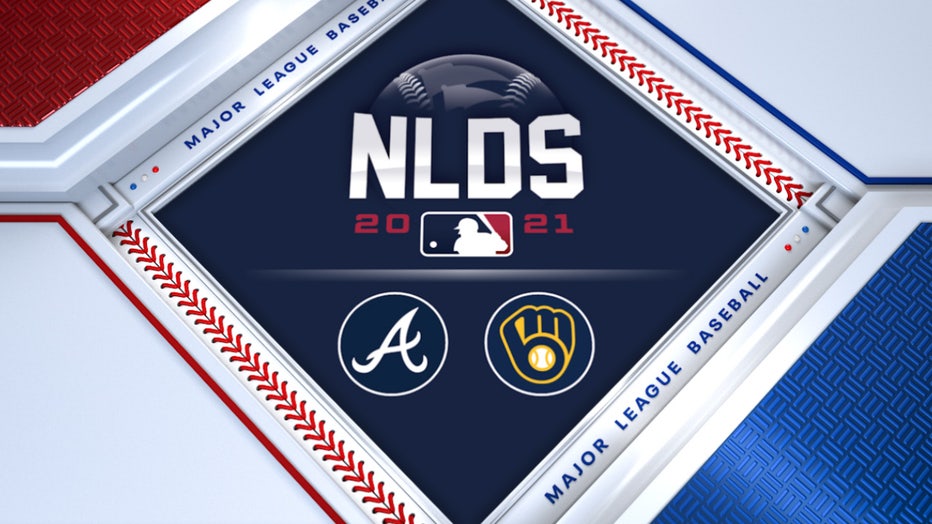 Since winning the opening game of the series, the NL Central champion Brewers have not scored in 19 consecutive innings. They were 0 for 8 with runners in scoring position in this loss.

Anderson was dominant for the NL East champion Braves, allowing three hits over five innings with no walks and six strikeouts. Will Smith, the fourth Braves reliever, pitched a perfect ninth for his second save of the series.

Milwaukee starter Freddy Peralta pitched four scoreless innings and was pulled for a pinch-hitter when the Brewers threatened in the fifth.

Houser gave up singles to Travis d'Arnaud and Swanson to open the fifth. Pederson, hitting for Anderson, pulled a high fastball deep into the right-field seats for a 3-0 lead.

Adam Duvall made a crucial baserunning mistake when he tried to advance from first to second as Austin Riley tried to score from third on d'Arnaud's flyball in the second. Left fielder Christian Yelich nailed Duvall for the third out before Riley crossed the plate, costing Atlanta a run.

Milwaukee center fielder Lorenzo Cain, running at full speed, crashed into the wire fence as he tried to catch Duvall's drive in the fourth. Cain held the ball in his glove before hitting the ground and losing control. Cain stayed down as Duvall raced to third with the two-out triple.

Cain remained in the game after a visit from manager Craig Counsell and a trainer. Peralta struck out Eddie Rosario to end the inning.

The Brewers hit only .183 in the first two games of the series, including a 3-0 loss in Game 2. Counsell made one lineup change, inserting Luis Urías at third base for Eduardo Escobar.

The Brewers couldn't score in the fifth after putting runners on second and third with no outs. Urías, hit by a pitch, moved to third on a double by Omar Narváez.

Anderson escaped when Cain's sharp grounder was stopped by a diving Swanson, who held the baserunners before throwing to first. Urías was caught in a rundown on pinch-hitter Daniel Vogelbach's grounder to third base, and Kolten Wong lined out to Freddie Freeman at first base to end the inning.

Swanson turned an acrobatic double play to end the eighth after Luke Jackson walked Jace Peterson and gave up a one-out single to Willy Adames.

FOX6 Coats for Kids is coming this November

We’re busy getting ready for FOX6 Coats for Kids 2021! The final details are coming together now, but we can tell you that the collection dates will be Nov. 8 – Dec. 5.

He walked away from football for two years, but now that he is back, one Greendale senior could not be playing any better. That's why he is this week's FOX6 High School Hot Shot.