GREEN BAY -- It's a battle between NFL conference foes -- and the stage could not have been bigger. That said, the Dallas Cowboys took it to the Green Bay Packers in a game that proved frustrating for fans. The Packers lost, 30-16.

The Cowboys were first to strike in the game -- Dak Prescott threw a one-yard touchdown to Cole Beasley. Dallas was up 7-0.

Green Bay took their first drive down the field -- and capped it with a 37-yard field goal from Mason Crosby. The made the score, 7-3, Dallas.

After a couple of turnovers -- one from each team -- the first quarter came to an end. The score remained 7-3, Dallas.

The Packers had started a drive at the end of the first quarter -- and wrapped it up early in the second. The drive was capped by a 43-yard Mason Crosby field goal -- making the score 7-6, Dallas. 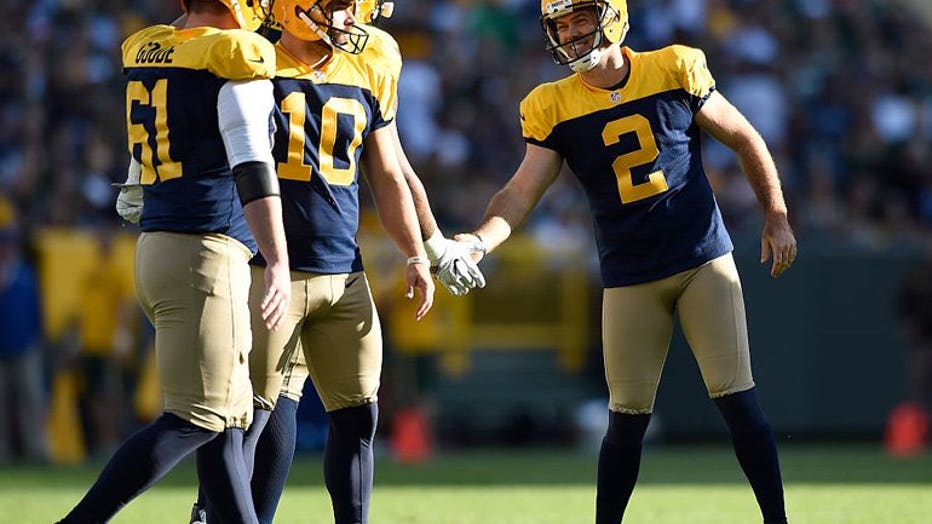 GREEN BAY, WI - OCTOBER 16: Mason Crosby #2 of the Green Bay Packers is congratulated by his teammates after kicking a field goal against the Dallas Cowboys during the first quarter at Lambeau Field on October 16, 2016 in Green Bay, Wisconsin. (Photo

The Cowboys bounced back with a 44-yard field goal of their own with 6:01 left in the first half. Dallas was still up with the score, 10-6.

And before the last seconds could tick off in the first half, the Cowboys put down an impressive drive -- 97 yards in just five plays -- and ended up throwing a touchdown pass. That put Dallas up 17-6.

The Packers got the ball first in the second half. But the team's drive ended abruptly when Aaron Rodgers threw an interception to Barry Church of the Cowboys.

Dallas took over on their own 49 yard line. They drove down the field -- and punched a 22-yard field goal through the uprights to take a 20-6 lead over Green Bay.

The next score in the game didn't come until the start of the fourth quarter. Despite having the ball in great field position, the Packers couldn't get the touchdown. Instead, Crosby closed the gap by another three with a 34-yard field goal. It was Dallas up 20-9 on Green Bay at that point.

The Cowboys fired right back on the very next drive. It was topped off with a four-yard touchdown pass to put Dallas up, 27-9.

There was some life breathed into the Green Bay offense on the next series. The Packers plowed down the field -- and capped the drive with a six-yard touchdown pass from Rodgers to Randall Cobb. The Packers were down 27-16.

The Cowboys moved the ball down the field on their next series -- and punched a 32-yard field goal through the uprights to make it 30-16, Dallas. At that point, 3:41 remained on the clock.

After the game, stick with FOX6 to watch a postgame Blitz — as the FOX6 Sports team crunches the numbers and chats with the players about the performance on the gridiron.