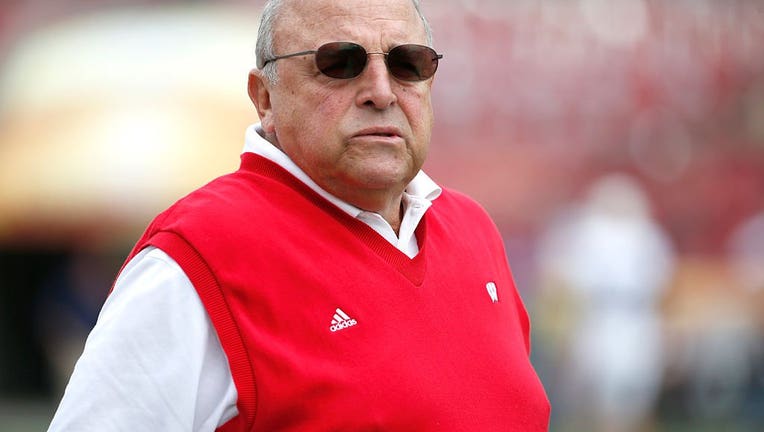 TAMPA, FL - JANUARY 1: Acting head coach Barry Alvarez of the Wisconsin Badgers looks on from the bench before the start of the Outback Bowl against the Auburn Tigers on January 1, 2015 during at Raymond James Stadium in Tampa, Florida. (Photo by Bri

Alvarez told ESPN’s “College GameDay” on Saturday that 12 football players and 10 staffers have tested positive. Alvarez said school officials would decide Tuesday whether to go ahead with the ninth-ranked Badgers' scheduled Nov. 7 home game with Purdue.

“We’re still having additions in our cases, and that’s something we’ve got to get our arms around and control it,” Alvarez said.

The Badgers (1-0) had been scheduled to play at Nebraska (0-1) on Saturday, but Wisconsin officials announced Wednesday they were calling off that game and pausing team activities for a week due to a coronavirus outbreak within the program. The Wisconsin-Nebraska game won't be rescheduled.

Wisconsin announced Wednesday that six players and six staffers – including head coach Paul Chryst – had tested positive since Oct. 24, the day after its season-opening 45-7 victory over Illinois.

School officials updated that number Thursday by saying two more staffers and one additional player had tested positive. The Thursday update indicated the football program had a total of 16 active cases, and that 15 of them had come since Oct. 24.

Wisconsin announced Saturday that Chryst has been told he could return to work as early as Thursday if he remains symptom-free. That date was determined after Chryst consulted with university health services and local health officials.

FOX6's Lily Zhao went one-on-one with FOX College Football Reporter Bruce Feldman to discuss a Badgers football team that is now dealing with a COVID-19 outbreak and how that might affect the shortened season.