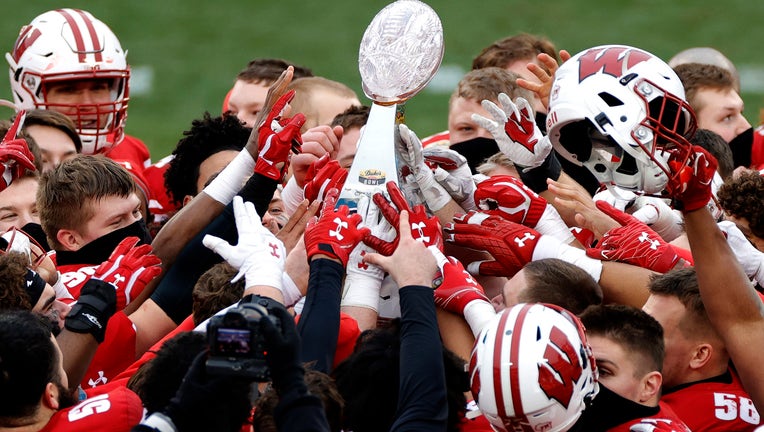 CHARLOTTE, NORTH CAROLINA - DECEMBER 30: The Wisconsin Badgers celebrate their victory over the Wake Forest Demon Deacons after winning the Duke's Mayo Bowl at Bank of America Stadium on December 30, 2020 in Charlotte, North Carolina. (Photo by Jared

MADISON, Wis. - The Wisconsin Badgers captured the Duke's Mayo Bowl and the trophy that came along with it.

And then they broke it.

While dancing around to celebrate his team's 42-28 victory over Wake Forest on Wednesday, quarterback Graham Mertz dropped the football-shaped piece of Lenox crystal, leaving it shattered on the floor of the locker room after it fell off its base.

"We just wanted everybody to have a piece of that trophy," Wisconsin coach Paul Chryst joked.

That would seem appropriate.

Mertz accounted for three touchdowns and Wisconsin turned four second-half interceptions, all by different players, into 21 points to turn a close game into a near-rout of the Demon Deacons. Five players scored touchdowns for the Badgers.

Mertz, a redshirt freshman, threw for 130 yards and ran for two short TDs as Wisconsin (4-3) finished a rocky 2020 season on a high note.

"Yeah, I dropped it," Mertz said sheepishly. "That's on me. It happened."

With the game tied at 21 late in the third quarter, Noah Burks intercepted Wake Forest's Sam Hartman on a pass in the flat when the intended receiver failed to turn his head around. Burks returned the ball 41 yards to set up a 14-yard scoring strike from Mertz to Mason Stokke on a wheel route, giving the Badgers their first lead.

The Wisconsin Badgers squared up against the Wake Forest Demon Deacons in the Duke's Mayo Bowl in Charlotte, North Carolina on Wednesday, Dec. 30.

Frustration boiled over for star J.J. Watt after the Houston Texans dropped their fourth straight game on Sunday.