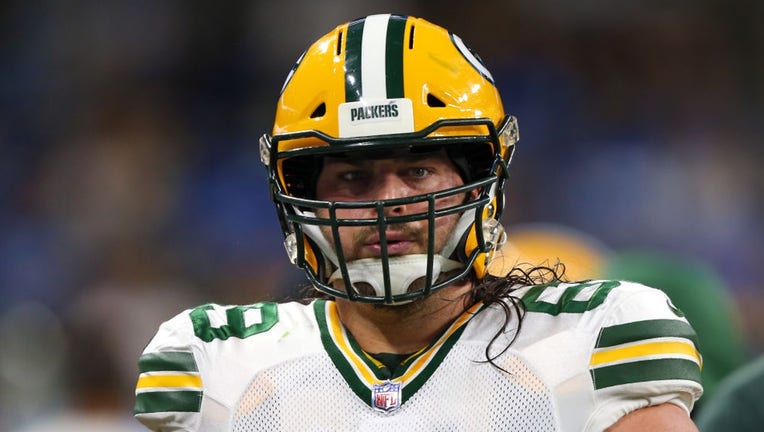 Green Bay Packers offensive tackle David Bakhtiari (69) is seen during the first half of an NFL football game against the Detroit Lions in Detroit, Michigan USA, on Sunday, January 9, 2022. (Photo by Jorge Lemus/NurPhoto via Getty Images)

The Packers are just happy they have the option of using Bakhtiari in any fashion now that the 2018 and 2020 All-Pro finally has returned from a severe knee injury that required three surgeries.

Packers coach Matt LaFleur worked Bakhtiari in gradually Sunday by having him alternate series with Nijman during Green Bay's 14-12 victory at Tampa Bay.

"Is it going to be something we do next week?" LaFleur said Monday. "I don’t know that. I think we’ll see where he’s at and come up with a game plan for this week."

LaFleur said he also hasn’t decided how the Packers will arrange their offensive line once Bakhtiari is ready to play a full game. The Packers have plenty of options because right tackle Elgton Jenkins has started games at every position but right guard.

The Packers’ decision will depend in part on how well Bakhtiari’s knee responds in the next day or so.

Bakhtiari played 35 snaps in just his second game appearance since tearing his left anterior cruciate ligament on Dec. 31, 2020. He returned for the Packers’ 2021 regular-season finale at Detroit, but wasn’t available for their playoff loss to San Francisco and hadn’t played again until Sunday.

When he was asked after the game how he felt, Bakhtiari acknowledged he was "pumped full of adrenaline right now" and could better answer that question over the next few days.

Bakhtiari returned a week after Jenkins came back from his own torn ACL that had sidelined him since last November. Although Green Bay’s offense had a disappointing day overall after reaching the end zone on its first two possessions, the presence of Bakhtiari and Jenkins made a difference in pass protection.

"I got hit maybe three or four times with one sack," quarterback Aaron Rodgers said after the game. "That’s kind of a dream-type of day, especially against that front on the road."

The Packers had given up five sacks in each of their two losses to the Tampa Bay Buccaneers in the 2020 season, when these two teams last faced each other.

Green Bay gave Rodgers more time Sunday while utilizing a rotation that LaFleur recalled from his stint as a Houston Texans assistant.

LaFleur worked in Houston from 2008-09 and remembered an instance when Mike Brisiel and Kasey Studdard rotated in at one spot on the Texans’ offensive line.

LaFleur believed such a plan might help as the Packers tried taking a cautious approach with Bakhtiari.

"We weren’t going to go zero to 60 with him, so we were either going to do some kind of a pitch count with him in terms of potentially pulling him at halftime or just started thinking about, getting back to my previous experience with doing this in Houston," LaFleur said.

For one week, it worked. Now the Packers must decide whether to keep it going.

The Packers’ special teams unit had one of its best games in recent memory, as Tampa Bay didn’t start from beyond its 25-yard line on 11 of its 12 possessions. ... After allowing Chicago’s David Montgomery to rush for 122 yards on 15 attempts in a 27-10 victory over the Bears last week, the defense limited Tampa Bay’s Leonard Fournette to 35 yards on 12 carries.

P Pat O’Donnell has placed nine of his 13 punts this season inside the opponent’s 20-yard line. He did it on five of seven attempts Sunday while averaging 48.4 yards per punt. ... CB Keisean Nixon stepped in for an injured Jaire Alexander and forced a fumble. He also downed a punt at the 2-yard line. … LB De’Vondre Campbell made 14 tackles and foiled Tampa Bay’s potential game-tying, 2-point conversion attempt by getting his hand on Tom Brady’s pass. ... Rookie WR Romeo Doubs had a breakout performance with eight catches for 73 yards and a touchdown.

The Bucs continue to give running back Aaron Jones fits. Jones rushed for 36 yards on 12 carries and lost a fumble that Tampa Bay’s Logan Ryan recovered in the end zone for a touchback. Jones also lost a fumble in Green Bay’s NFC championship game loss to the Bucs two seasons ago and had just 10 carries for 15 yards when the Packers fell at Tampa Bay on Oct. 18, 2020.

Alexander left with a groin injury in the first half. ... WR Sammy Watkins (hamstring) went on injured reserve Saturday and must miss at least three more games. ... WR Christian Watson (hamstring) was inactive for Sunday’s game.

The Packers return home to face the New England Patriots (1-2) on Sunday.