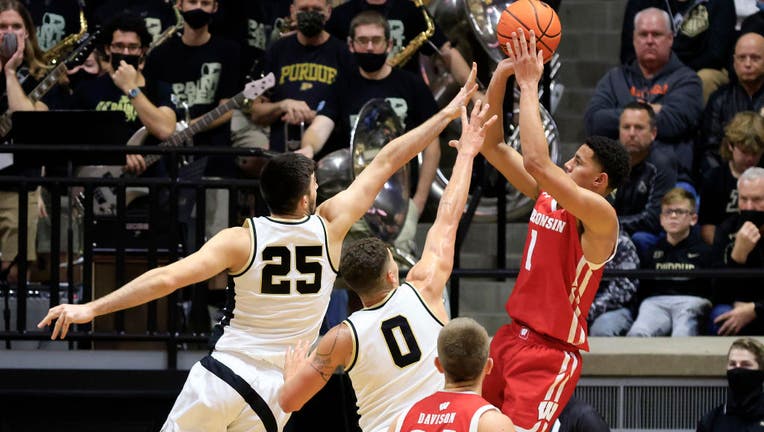 WEST LAFAYETTE, INDIANA - JANUARY 03: Johnny Davis #1 of the Wisconsin Badgers shoots against Ethan Morton #25 of the Purdue Boilermakers during the second half at Mackey Arena on January 03, 2022 in West Lafayette, Indiana. (Photo by Justin Casterli

After skipping breakfast in the morning and spending the afternoon trying to figure out how to beat No. 3 Purdue on the road for the first time in nearly eight years, the Badgers found plenty of ways to feed their sophomore star.

Davis scored a career-high 37 points, grabbed 14 rebounds and made most of the big shots to lead No. 23 Wisconsin past the third-ranked Boilermakers 74-69.

"I just went out and played my game," Davis said. "My teammates did a really good job getting me the ball in the right spots."

Davis is the first Division I player to lead his team in all five categories in a road win over a top-five foe since Tim Duncan did it for Wake Forest against Maryland on Feb. 1, 1997.

Davis had plenty of help from other Badgers, too: Brad Davison scored 15 points and made two crucial 3s in the final four minutes and coach Greg Gard took a page out of Purdue's playbook by playing a physical, harassing style and winning inside.

The result? Purdue (13-2, 1-2) lost for the first time since Dec. 9 and had a 13-game winning streak at Mackey Arena end. Zach Edey took advantage of his 7-foot-4 frame by scoring 24 points and grabbing 10 rebounds, while Jaden Ivey added 14 points. It just wasn't enough.

"We just have to grow up and be tougher, that’s it," Purdue coach Matt Painter said. "That was a great lesson for us. You hate to have a loss as a lesson but that’s competition."

Gard gambled that his team, which had been short-handed because of COVID-19 protocols, could overcome foul trouble by simply playing a tougher brand of basketball.

It looked as if Purdue had finally taken control when Ivey, Davis' summer teammate with Team USA, scored on a layup with 11:11 left to give the Boilermakers a 49-42 lead.

Instead, Davis feasted on the Boilermakers defense. He scored three straight to give Wisconsin a 57-54 lead and when Purdue retook the lead at 58-57, Davis and Davison almost single-handedly led the Badgers on a decisive 14-5 run capped by Davis 3-pointer with 1 minute to go. That made it 71-63 and Purdue never fully recovered.

"I think it shows our team what we’re capable of being. We came in tonight, we weren’t scared they were ranked third or we were playing at their arena," Davis said, explaining how the Badgers celebrated by spraying water in the locker room. "My jersey’s soaked right now and it’s cold. But they came out and fought tonight."

Wisconsin: This young team has grown up in a hurry and is playing traditional Badgers basketball. It takes care of the ball, makes free throws and stays in front of opponents on defense. If Wisconsin continues playing this way, they will be a tough matchup for anyone in the Big Ten.

Purdue: Just hours after breaking the school record by remaining in the top three for a seventh consecutive week, the Boilermakers had perhaps their most inexplicable performance of the season. They struggled to shoot, were outworked inside and couldn't put the game away when they had the chance.

Wisconsin: Monday's performance, on the road, should turn any lingering doubters into believers. Expect the Badgers to make a big jump in next week's rankings if they win again later this week over Iowa.

Purdue: The Boilermakers will take a hit in the rankings next week and not just because of the loss. This was not the same strong, aggressive team that dominated the nonconference schedule and Wisconsin exposed some vulnerabilities that need to be fixed.

"I felt like they played harder the entire game," Edey said. "They played harder, got all the 50-50 balls, dominated the glass at times, ran harder and executed better."

A fire on State Street in Wauwatosa Monday resulted in no injuries.