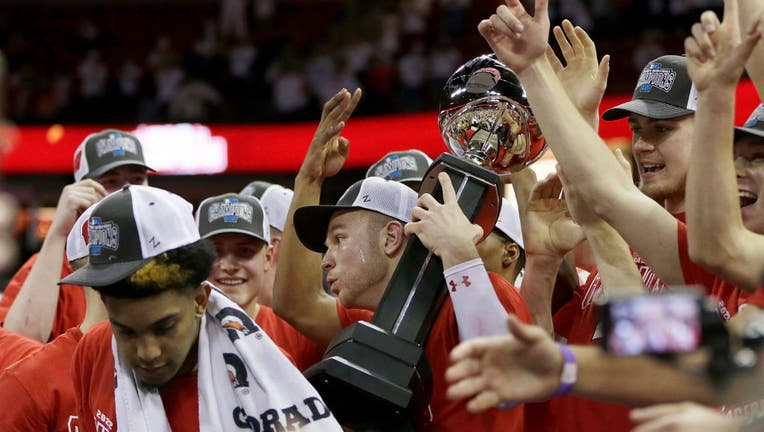 MADISON, Wis. - Chucky Hepburn tried to keep a straight face as the freshman insisted he knew his game-winning 3-pointer was accurate as soon as he took the shot.

The laughter from his teammates told a different story.

Hepburn banked in a tiebreaking 3-pointer with 1.5 seconds left to give No. 10 Wisconsin a 70-67 victory over No. 8 Purdue on Tuesday night that clinched the Badgers a share of the Big Ten regular-season title.

"I knew we were about to be Big Ten champs after I released it," Hepburn said before breaking out a grin.

The Badgers have plenty of reason to smile.

Wisconsin (24-5, 15-4 Big Ten) has won five straight and now has at least a share of its 20th Big Ten regular-season title. A victory Sunday at home against Nebraska would give the Badgers their first outright conference title since 2015, when they went on to reach the NCAA Tournament championship game.

Throughout its surprising season, Wisconsin's heard criticism that it's been lucky because it has won so many close games. This time, even the Badgers themselves could laugh at Hepburn's good fortune.

"I’m not going to lie," Wisconsin guard Johnny Davis said during the wild postgame celebration. "That was some bull... when that went in."

Each of Wisconsin’s last two baskets came on bank shots. Davis banked in a jumper from just inside the 3-point line to extend Wisconsin’s lead to 67-64 with 25 seconds left.

After Wisconsin’s Brad Davison missed the front end of a one-and-one opportunity, Purdue’s Jaden Ivey tied the game by sinking a 3-pointer with 8.9 seconds remaining. The Badgers worked the ball to Hepburn, who calmly fired the winning shot from in front of Wisconsin’s bench.

Hepburn celebrated by running toward the student section on the opposite end of the floor with his arms outstretched. The freshman guard finished the night with a career-high 17 points.

"He's had a moxie and a calm to him all year," Wisconsin coach Greg Gard said. "He plays beyond his age, so to speak. At that position, that's difficult. It's like being a freshman quarterback."

"It was so loud at one point my ears were literally ringing," Davis said.

All season long, Wisconsin has figured out a way to make winning plays when a game’s on the line.

The Badgers have won each of the last 15 times they’ve played a game that was decided by six points or fewer. Wisconsin’s only loss in those types of games was a 63-58 home decision against No. 11 Providence on Nov. 15 when a lower-body injury prevented Davis from playing.

The Badgers also completed first regular-season sweep of the Boilermakers (24-6, 13-6) since 2014, as the Badgers won 74-69 at Purdue on Jan. 3. They’ve now won each of the last 15 times they’ve played a game that was decided by six points or fewer.

"We’ve been in games like this before, where we’ve gotten some breaks," Purdue coach Matt Painter said. "They got some breaks in the end, but you have to give them credit. They also worked really hard to be in this position. They’ve won a lot of close games all year. It’s not like they’re not good at winning close games. They have found a way all year. They’ve got a special group."

Wahl scored 19 points for Wisconsin, and Davis had 16 points and eight rebounds.

Purdue: Ivey and Edey were spectacular down the stretch, but they didn't get enough help. Purdue also went just 11 of 20 on free-throw attempts, with Ivey going 3 of 9.

Wisconsin: Hepburn is only a freshman, but he showed Tuesday he has the savvy to lead the Badgers on a deep postseason run.

If Wisconsin follows up this win with a victory over Nebraska, the Badgers should move up a few spots and could even crack the top five. Purdue is at risk of falling out of the top 10 for the first time this season. The Boilermakers have been in the top 10 for 17 straight weeks, the longest streak in program history.