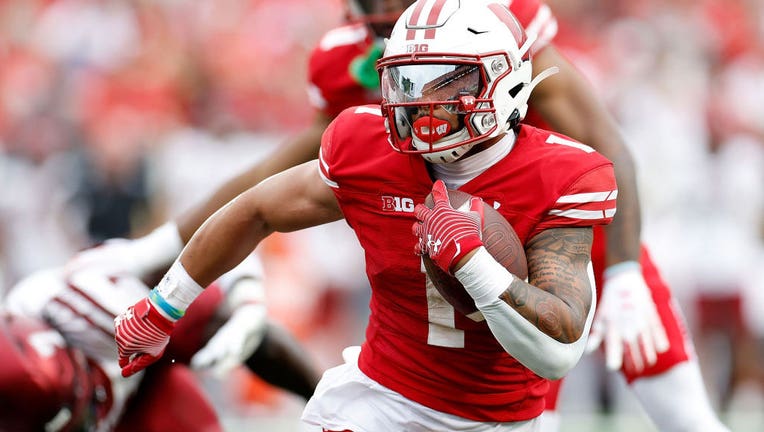 MADISON, WISCONSIN - SEPTEMBER 17: Chez Mellusi #1 of the Wisconsin Badgers rushes the ball during the game against the New Mexico Aggies at Camp Randall Stadium on September 17, 2022 in Madison, Wisconsin. (Photo by John Fisher/Getty Images)

MADISON, Wis. - Wisconsin running back Chez Mellusi will miss an unspecified length of time after injuring his right wrist in the Badgers’ 42-7 victory over Northwestern.

Mellusi has rushed for 223 yards and one touchdown on 56 carries this season, He also has two catches for 25 yards, including a 23-yard touchdown in the Northwestern game.

This marks the second straight year that Mellusi has missed time with an injury.

Mellusi, a Clemson transfer, rushed for 815 yards and five touchdowns on 173 carries in nine games with Wisconsin last year before a torn left anterior cruciate ligament knocked him out for the remainder of the season.

"It's certainly sad when you see your brother like that getting injured, especially with the journey he's had," left tackle Jack Nelson said. "I'm confident he'll be back. I remember when that guy came back from his ACL, I was shocked. He looked like a bodybuilder, just incredible. There's a silver lining in the sense that I know he'll come back stronger than ever, better than ever."

His absence will limit Wisconsin's running-back depth behind Braelon Allen, who has rushed for 634 yards and six touchdowns.

"It's hard for him," Allen said. "He's a guy who, no matter what he's going through, he's always going to try to be on the field and help his team out. For him not to be able to do that, at least right now, is tough. He was having a tough time after the game."

In other roster news, reserve quarterback Deacon Hill announced on social media that he is entering the transfer portal. Hill’s only game action was a brief appearance in a 66-7 rout of New Mexico State on Sept. 17.

Myles Burkett beat out Hill for the right to serve as Graham Mertz’s main backup this year. Chase Wolf, who entered the season as the projected second-team quarterback behind Mertz, hasn’t played yet this season due to an injured right leg.

"I have a ton of respect for Deacon," Leonhard said. "This is a little bit the new normal. Kids have to weigh what they think their future is, where they stand, what has the communication been with the staff. You get one opportunity to play college football. You like guys to continue to push and trust the process and trust the decision they made to come here, but sometimes it gets to a point where they feel like they have to move on.