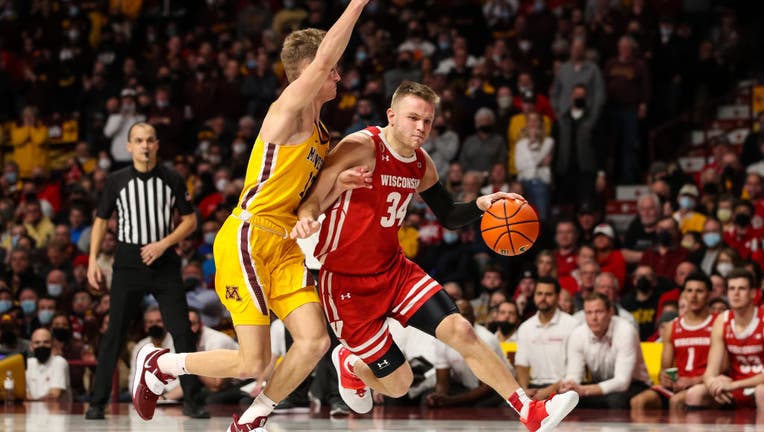 MINNEAPOLIS, MN - FEBRUARY 23: Brad Davison #34 of the Wisconsin Badgers drives to the basket while Luke Loewe #12 of the Minnesota Golden Gophers defends in the second half of the game at Williams Arena on February 23, 2022 in Minneapolis, Minnesota

MINNEAPOLIS - Johnny Davis had a quiet game that ended early, when Wisconsin's standout guard fouled out with 2:35 to go and the 13th-ranked Badgers gripping hard on a one-point lead at Minnesota.

From start to finish, the big men produced more proof there's more to this team than just Davis.

There are two of them, actually, as twin brother Jordan Davis reminded the Gophers with his valuable contribution down the stretch.

Steven Crowl scored 20 points and grabbed seven rebounds and Tyler Wahl added 12 points and 10 rebounds and Wisconsin fended off Minnesota for a 68-67 victory on Wednesday night.

"This team is just a really driven team. Everyone knows that when your number gets called, you've got to go in there and produce," Wahl said.

Johnny Davis, the only Big Ten player who leads his team in points, rebounds and assists, was replaced by his brother when he picked up his fifth foul. After Payton Willis split the pair of free throws to even the score at 62, the eighth tie of the game, Jordan Davis answered with a layup on the other end.

Jordan Davis, the twin brother of Johnny Davis, made a layup with 2:18 remaining for the lead. Then after Wahl rebounded a miss by the Gophers, Crowl banked in a hook at the shot-clock buzzer to make it 66-62 with 1:19 left.

"I don't think anyone was stunned," Jordan Davis said. We're not just a one-man team. No offense — I know he's my brother — but we just battled through it."

With a layup by Willis the Gophers got back within two points, but Wahl worked the board to keep alive a miss by the Badgers and reset the shot clock.

Brad Davison, the Big Ten’s leading free-throw shooter at 89.1%, made two foul shots to seal it for the Badgers (22-5, 13-4) and put them in a first-place tie in the Big Ten with Purdue. Illinois is a half-game behind. Wisconsin hosts the fourth-ranked Boilermakers next week.

Jamison Battle scored 17 points and Willis — who missed the last game with COVID-19 and came off the bench for the first time this season — added 13 points for the Gophers (13-13, 4-13). They faced their biggest deficit of the game at 59-51 before a pair of 3-pointers by Willis fueled an 8-0 spurt.

As he glanced at the boxscore, noting the three starting guards for the Badgers combined for only 25 points with Johnny Davis fouling out, Gophers coach Ben Johnson said, "I would’ve taken that every day of the week."

The Gophers, who went 13 for 19 from the free-throw line, got a big spark from their leading scorer Battle. He scraped off a high screen to drive and throw down a one-handed dunk on Johnny Davis for a 20-15 lead. A little later, Battle swished an off-balance shot-clock beater from the wing with his smooth left-handed stroke. But he went only 1 for 4 from the floor in the second half, as Davison helped chip in on defense against him.

With four Minnesota natives on their roster — including Wahl, the 7-foot sophomore Crowl and fifth-year firebrand Davison — the Badgers were nevermore the villain than on this visit to their border-state rival's raised floor at Williams Arena.

Crowl and Wahl made this a big man’s game, another opponent taking advantage of the undersized Gophers underneath. Wahl backed down sixth-year senior Eric Curry for a layup and two hook shots on three consecutive possessions to give the Badgers a 28-25 lead they didn’t relinquish.

The Badgers were without Lorne Bowman II due to a non-COVID-19 illness and Jahcobi Neath for a one-game suspension issued by the Big Ten for the handshake-line fracas with Michigan, leaving them down their top two backup guards.

That created the opportunity for Jordan Davis, who had seven points and two assists in 20 minutes — all career highs.

"He practiced really well yesterday. I thought he had a little bounce. He knew this was coming," coach Greg Gard said. "I'm just really happy for him."

The Badgers have won 33 of the last 42 matchups with Minnesota. Since reaching the Final Four in 1997, the Gophers have made the NCAA Tournament only seven times with just two top-four finishes in Big Ten play.

Wisconsin has three Final Four appearances since then and on the way to a 22nd trip to the NCAA Tournament and a 20th top-four finish in the conference over the last the quarter-century.

Wisconsin: The Badgers improved to 8-2 in true road games this season. Davison had only seven points but enjoyed a victory in his final visit to Minnesota.

Minnesota: The Gophers have impressed the Big Ten with their performance in Johnson's first season, but they've grown tired of these late fades in games.

A winter weather advisory has been issued for parts of SE Wisconsin.

In 2021, the health department admitted it ''mismanaged'' its Childhood Lead Poisoning Prevention Program. A recent audit shows evidence of change.