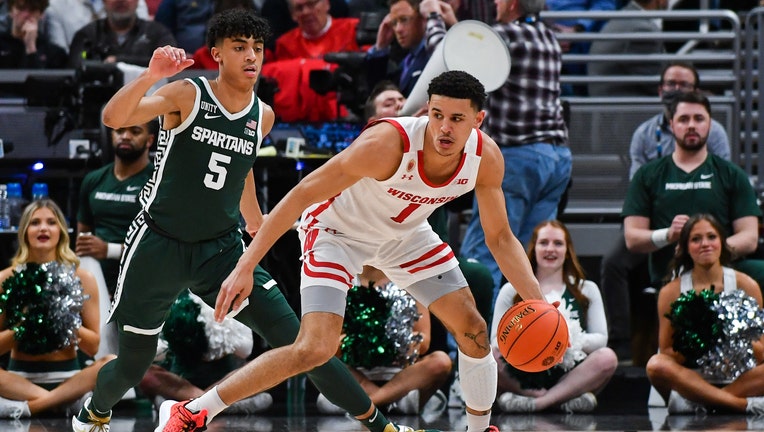 Johnny Davis of the Wisconsin Badgers dribbles against Max Christie of the Michigan State Spartans during the first half of the Big Ten Tournament quarterfinals game at Gainbridge Fieldhouse on March 11, 2022 in Indianapolis. (Photo by Aaron J. Thorn

INDIANAPOLIS - Marcus Bingham Jr. matched his career high with 19 points and Tyson Walker scored nine of his 11 points in the final minute and a half to send seventh-seeded Michigan State past No. 12 Wisconsin 69-63 in Friday night's Big Ten Tournament quarterfinals.

The Spartans (22-11) lost five of their last seven regular-season games but have reached the conference tourney semifinals by winning two straight in Indianapolis.

Brad Davison led the Badgers (24-7) with 23 points. Big Ten player of the year Johnny Davis played through an ankle injury but wasn't himself. He missed his first eight shots, went 3 of 19 from the field with no 3-pointers and finished with 11 points and 11 rebounds.

Wisconsin lost its second straight and exited the tournament along with Big Ten regular-season co-champion No. 16 Illinois. The Big Ten's top seed lost to Indiana in the first of four quarterfinals.

Bingham swung the game in the second half. After Davison's back-to-back baskets gave Wisconsin a 40-36 lead, Bingham answered with all of the points in the Spartans' 11-2 run. When it ended, Michigan State led 47-42 with 7:57 left.

They never trailed again though the Badgers tied the score at 58 when Chucky Hepburn cut the lead made a 3 with 1:56 to play. Hepburn finished with 11 points.

Michigan State closed it out at the free-throw line. Walker also had seven assists.

Michigan State: The Spartans helped their NCAA Tournament seeding with this win. How far they'll climb remains to be seen, but they're just one win away from reaching the Big Ten title game for the sixth time in 10 tourneys.

Wisconsin: With Davis struggling, the Badgers weren't themselves. They shot 24.1% in the first half in a game that was reminiscent of their 2000 national semifinal game. Michigan State also won that one, 53-41, en route to coach Tom Izzo's only national championship.

The Badgers almost certainly will slide in the final rankings Monday but where they'll end up may be determined by how many upsets occur in conference tournaments this weekend. More interesting will be seeing how the NCAA Tournament selection committee views Davis' injury after Friday's game.

Wisconsin: Will find out who it plays and where Sunday night.

The Green Bay Packers on Friday, March 11 announced plans for a price increase on stadium bowl tickets for the 2022 season.

Bronze Fonz returns to Milwaukee RiverWalk; freshened up for selfies

The Bronze Fonz is back! The Bronze Fonz has been reinstalled in its place on the Milwaukee RiverWalk – and is ready to welcome visitors and selfies galore!

Baseball is back but some ticket holders worry they’ve been thrown a curve ball. Game dates are shifting, but many fans are just happy to play ball!