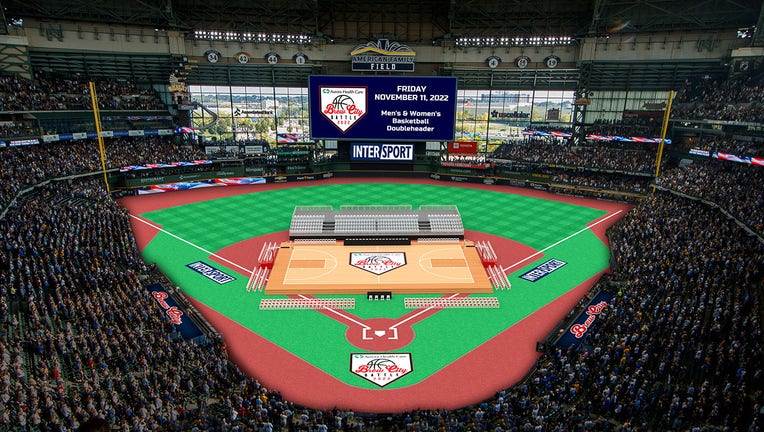 MILWAUKEE - The Wisconsin Badgers' men's and women's basketball teams will play a doubleheader in Milwaukee at American Family Field on Friday, Nov. 11.

The "Aurora Health Care Brew City Battle" will be the first basketball games ever played at the home of the Milwaukee Brewers, the Badgers' athletic department says.

The women's team will face Kansas State, followed by the men's team taking on Stanford. Game times will be announced at a later date.

The court at the Brew City Battle will be positioned across the ballpark's infield, with center court near the pitcher's mound. Temporary seating will be installed just beyond second base along with additional field-level seating around the court.

Donors to athletics, as well as men's and women's basketball season ticket holders, will be provided priority access to tickets through pre-sales the week of July 18. Tickets will go on sale to the general public on July 26.

Tickets for on-field seats will be all-inclusive with a variety of food and beverage options. One ticket is valid for both games, and the event is not part of either the men's or women's season ticket packages for the 2022-23 season.

Details on how to get tickets will come at a later date. Fans can also log on to Brew City Battle website and register to receive email alerts regarding ticket details, premium hospitality options, unique experiences and other event information.

"Playing a game at American Family Field has been a vision for quite some time and I am so excited to see it become a reality.

We want to thank the Brewers and Intersport for their efforts and partnership in bringing this dream to life. We are always looking to play in exciting venues and competitions and the chance to be the first-ever basketball event at the Brewers stadium is going to be an unforgettable experience for both our athletes and fans."

"We are absolutely thrilled for our team to be competing in the Brew City Battle.

"This doubleheader with our men's program is an incredible opportunity for not only our players, but also for our fans to experience Badger basketball in such a unique environment. Being able to play on the home field of the reigning NL Central champions and just down the road from the NBA Champions, sets the stage for a great event. This is an unbelievable platform for girls and women in sports as we celebrate the 50th anniversary of Title IX and we can't wait to see you all there."