Her senior season, 2019 state runner-up Julia Moore had unfinished business at state, and so did her teammate Evan Bartelsen.

Her senior season, 2019 state runner-up Julia Moore had unfinished business at state, and so did her teammate Evan Bartelsen.

"We both came into the season ready to show what we were working on that whole Covid season," said Julia Moore, an Arrowhead graduate and Division 1 state record-holder in pole vault.

Their hard work paid off.

Julia took home gold and set a new Division 1 state record in the process with a vault of 12 feet, 8 inches.

"I feel like I’ve been waiting for this for a really long time," said Moore.

Evan did the same. He's also a state champion with a vault of 15 feet, 6 inches.

"It all came together," said Bartelsen. "It was all worth it. All that work you put in just to make that new bar, or not even a new bar, just a bar, is just really surreal."

Even more surreal, the two friends experienced their top finishes together. 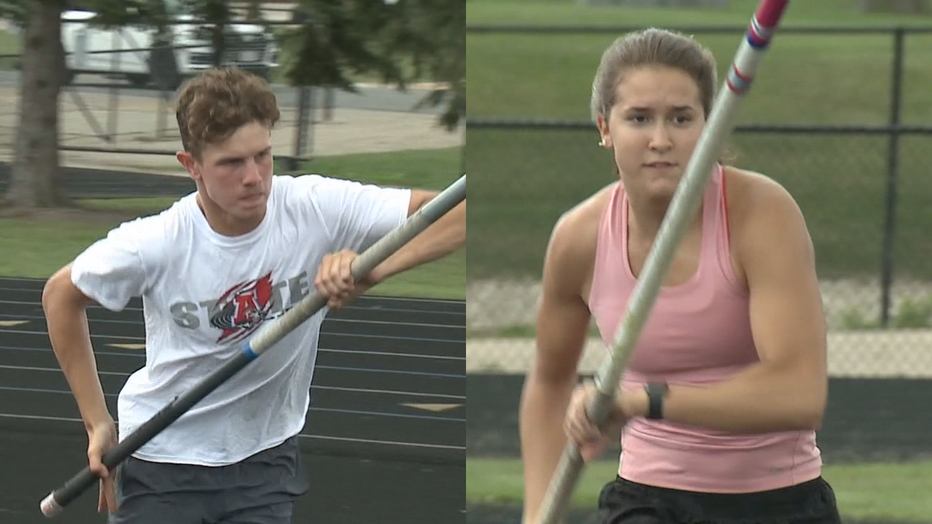 "We were both happy that it ended the way we planned it almost," said Moore. "Obviously, we weren't both like let's win state, we never really talked about state."

"It was more each meet individually and then that led to learning to get to state," said Bartelsen.

Their families also didn't have to go far to congratulate them, because believe it or not, Julia and Evan are also neighbors and live on the same block.

"I walked up to her grandpa, and I was like two baby and I high-fived him," said Bartelsen. "It didn't hit me until after when the adrenaline shock came down and we drove over to her house to drop her off. The neighbor came over and had his little girls, and they were like two state champions in the same neighborhood! I was like wait a minute."

"Yeah, that's when it really hit me," said Moore.

And as a friendly neighbor, it wasn't hard for Evan to ask Julia for advice when he first wanted to get into pole vaulting.

"I've been removed from like six different sports and then I knew one of my neighbors and close friends was Julia Moore and she was a very good pole vaulter," said Bartelsen. "I knew she went to a pole vault club, so I kind of called her up and I was like hey, can I come to the pole vault club with you?"

From there, the rest was history.

"There's a lot of videos going all the way back to when he just started and when I started, with we're both in it and we were screaming at each other," Moore said. "We like to push each other and make fun of each other because that makes it more fun."

In July, the duo even went to The Outdoor Nationals, presented by Nike, which brings America's top prep track and field talent to Hayward Field at the University of Oregon.

"I think it really showed me what college is going to be like," said Moore. "You start at a much higher height."

Now in college, both still vault, but their paths have split.

Julia is at the University of Wisconsin-Madison, while Evan is at UW-Milwaukee.

"I'll definitely miss vaulting with Evan," said Moore. "It's definitely going to be different not having that support."

No matter the distance, there are no limits to their friendship as they reach for new heights.