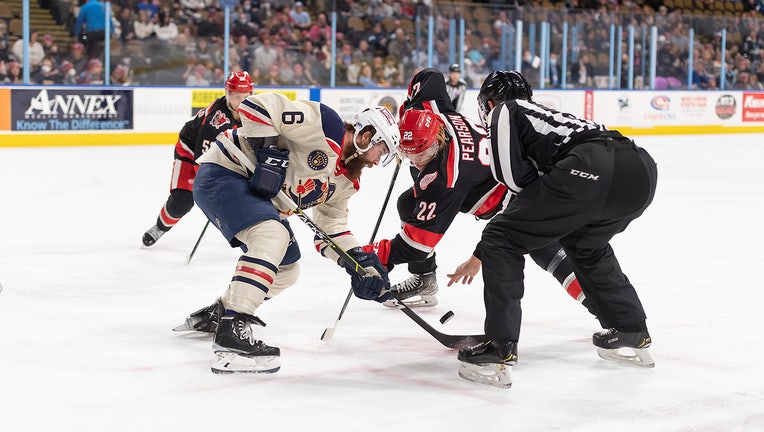 MILWAUKEE - Mitch McLain and Egor Afanasyev scored goals for the Milwaukee Admirals, but it wasn’t enough to overcome a four-goal second period by Grand Rapids as they dropped a 4-2 decision to the Griffins on Saturday night at UW-Milwaukee Panther Arena.

The Admirals came out of the gate strong, outshooting the Griffins 18-12 in the first.

McLain got Milwaukee on the board with an unassisted shorthanded tally with 6:18 left in the first. McLain intercepted a pass near the Admirals' blueline and skated in two-on-one with Mathieu Olivier. With a Griffins defender prone on the ice in front of him, McLain lifted the puck just over the right shoulder of Grand Rapids goalie Chet Pickard for his ninth of the year.

The second period would be all Grand Rapids as they scored four goals in the first 14 minutes of the sandwich frame, beginning just 58 seconds into it on Taro Hirose’s first of the game. Hirose scored his second of the night just over three minutes later when he collected a loose puck in the slot and roofed it by Admirals netminder Devin Cooley.

Donovan Sebrango and Ryan Murphy also tallied goals for the Griffins in the second to give them a 4-1 advantage after 40 minutes of play.

Afanasyev picked up a goal in the third period for Milwaukee to cut the lead to 4-2, but it was as close as they would get. Kole Sherwood stopped an attempted clear from behind the net by Pickard, dished to Afanasyev, who came from behind the net and tucked it inside the right post.

Pickard made 33 saves in net for Grand Rapids to pick up the victory, while Devin Cooley made 25 saves for the Ads, but suffered the loss.

The Admirals and Griffins head back around Lake Michigan to hit the ice for the fourth consecutive game next Wednesday, Jan. 5 at 6 p.m. CST. Milwaukee’s next home game will be on Friday, Jan. 7 when they play host to the Cleveland Monsters at 7 p.m.

Vikings QB Cousins COVID positive, will not play against Packers

Minnesota Vikings quarterback Kirk Cousins has tested positive for COVID-19 and will not be playing against the Green Bay Packers on Sunday night, Jan. 2.