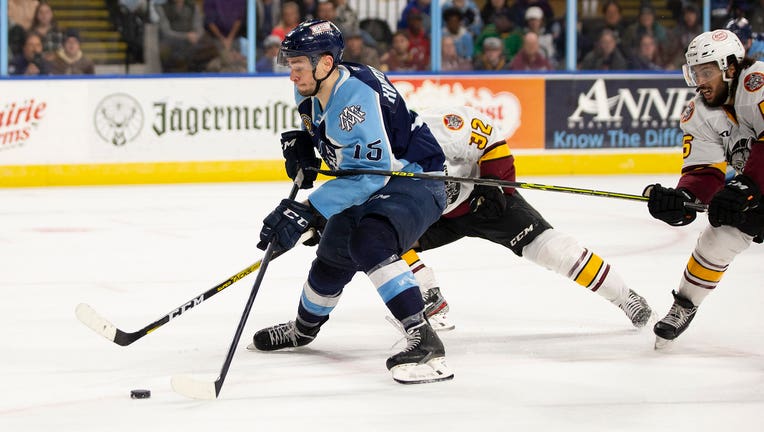 MILWAUKEE - Admirals Devin Cooley celebrated his birthday in style, stopping 47 shots to help guide the Admirals to a 4-2 win over Chicago and stave off elimination in game three in the Central Division Finals.

Cooley was helped by the Ads power-play which converted on three of their six opportunities. Milwaukee picked up PPGs from Rocco Grimaldi, Cole Smith, Cole Schneider and got an even-strength goal from Brayden Burke, while Cody Glass chipped in with three assists.

The Admirals took their first lead of the series courtesy of a Grimaldi power-play tally at 4:51 of the second period. The play began when Schneider carried the puck along the goal line and passed through the seam to Cody Glass, who immediately sent the puck back across the ice to Grimaldi and he had an open net for his first of the post-season.

The Ads power-play struck again with just under four minutes to go in the second period on Smith’s second goal in as many contests. Glass sent perfect pass from the right point down to Smith in the slot, who used his stick to deflect the puck over the shoulder of Wolves goalie Alex Lyon.

After the Wolves cut the lead to one just nine seconds into the third on a Jack Drury, the power-play responded again when Schneider cleaned up a loose puck in front of Lyon and slid it by him for his third of the post-season at 2:31 of the third.

Burke widened the Admirals lead to three 2:10 later when he redirected a Cole Smith shot from right in front of the net to pick up his fourth goal in the playoffs.

The Wolves would get one of those back courtesy of a Josh Leivo tally at 14:44 of the third, but that would be the extent of their offense as the Ads finished a perfect 6-for-6 on the penalty kill, which included three successful PKs in the third period.

The win ran the Admirals record on home-ice this post-season to 3-0. They will look to make it 4-for-4 when they host game four on Friday night at 7 pm at Panther Arena. Tickets start at just $10.