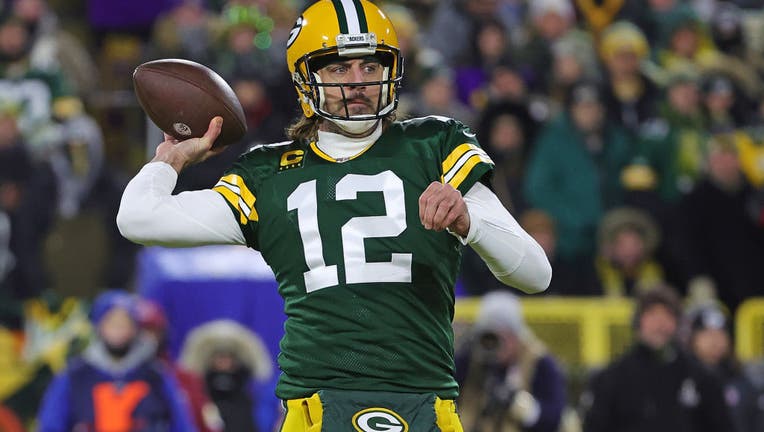 GREEN BAY, WISCONSIN - JANUARY 02: Aaron Rodgers #12 of the Green Bay Packers drops back to pass during a game against the Minnesota Vikings at Lambeau Field on January 02, 2022 in Green Bay, Wisconsin. The Packers defeated the Vikings 37-10. (Photo

Rodgers is expected to win the MVP award for the second year in a row – but Arkush claimed he doesn't deserve it this year because of his dramatic and turbulent offseason.

"I don’t think you can be the biggest jerk in the league and punish your team, and your organization and your fan base the way he did and be the most valuable player," Arkush said on the sports radio station.

Before the current season began, Rodgers hinted at retiring or joining another team after he openly criticized the Packers’ front office and voiced his disappointment in their draft selections.

But, Rodgers ultimately played — leading his team to an NFL-best 13-3 record (with one week to go), capturing the NFC North divisional title, and securing a first-round bye in the postseason.

"Has he been the most valuable on the field? Yeah, you could make that argument, but I don’t think he is clearly that much more valuable than Jonathan Taylor (Colts running back) or Cooper Kupp (Rams wide receiver) or maybe even Tom Brady (Buccaneers QB). So from where I sit, the rest of it is why he’s not gonna be my choice," Arkush said.

While not securing a unanimous vote, Rodgers will likely still win, according to Arkush.

"Do I think he’s gonna win it? Probably," he told the station. "A lot of voters don’t approach it the way I do, but others do, who I’ve spoken to. But one of the ways we get to keep being voters is we’re not allowed to say who we are voting for until after the award has been announced. I’m probably pushing the envelope by saying who I’m not voting for. But we’re not really supposed to reveal our votes.

"There are no guidelines. We are told to pick the guy who we think is most valuable to his team. And I don’t think it says anywhere, ‘strictly on the field,’ although I do think he hurt his team on the field by the way he acted off the field," Arkush continued.

Rodgers also sparked some controversy across the league when he tested positive for COVID-19 and it was learned that he was not vaccinated.

Justifying the nonvote, Arkush said: "I just think that the way he’s carried himself is inappropriate. I think he’s a bad guy, and I don’t think a bad guy can be the most valuable guy at the same time."

If Rodgers wins the MVP, it will be his fourth — the most among active players (and behind only the retired Peyton Manning, who won 5).