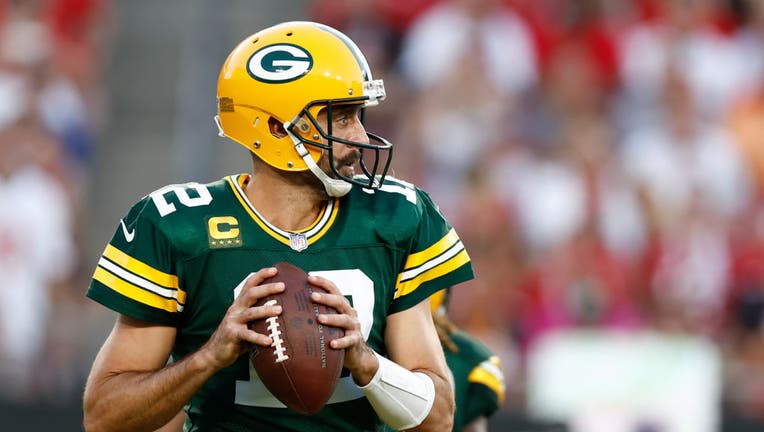 GREEN BAY, Wis. - Aaron Rodgers expressed his displeasure for college football’s targeting rules in his weekly appearance on "The Pat McAfee Show" on Tuesday as the program was discussing taunting rules in the NFL.

The Green Bay Packers quarterback discussed Kansas City Chiefs defensive end Chris Jones’ unsportsmanlike conduct penalty on 4th-and-15 against the Indianapolis Colts on Sunday with McAfee and A.J. Hawk. The Colts won the game with many blaming Jones for giving Indianapolis some life in the matchup.

Rodgers told McAfee and Hawk some rules NFL officials have put more of an emphasis over the course of the last couple of seasons. He said the league needs to be "careful" about "going too far" with the rules and different points of emphasis. He cited college football’s targeting rule.

"It’s like what college did with targeting. Are you s----in me? Like, it’s absolutely ridiculous. You’re ruining these kids’ and teams’ opportunities by subjective calls or weird movements the defender makes or an offensive player lowers their head last minute and it becomes helmet-to-helmet," Rodgers said.

He added he did not think it was fair to eject players.

"The punishment doesn’t fit the crime. It’s ridiculous. We gotta be careful on how far we go on some of these rules," he said.

Rodgers agreed with McAfee on replay looking at intent. He said if a guy is spearing people they deserved to be kicked out of the game.

"If a guy is making a head up tackle and the offensive player lowers his head or does a weird thing and it becomes helmet-to-helmet that shouldn’t be grounds for ejection. That’s ridiculous," he said. "You’re impacting these kids’ lives on a grand scheme. I don’t think it’s right."