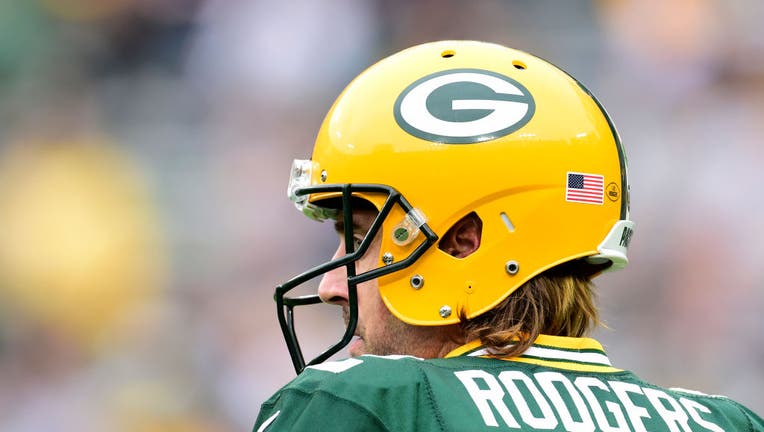 GREEN BAY, WISCONSIN - OCTOBER 03: Aaron Rodgers #12 of the Green Bay Packers on the field during pregame against the Pittsburgh Steelers at Lambeau Field on October 03, 2021 in Green Bay, Wisconsin. (Photo by Patrick McDermott/Getty Images)

The 2020 NFL MVP was in the middle of putting together another win for the Green Bay Packers when the broadcast cameras caught Rodgers and the Steelers head coach smiling at each other. Some Steelers fans got excited as the team could have a reasonable shot at acquiring Rodgers in the offseason.

To make matters even more interesting, Rodgers explained the interaction with Tomlin on Tuesday on "The Pat McAfee Show."

"I’m a big Mike Tomlin fan, I have been for a long time. I like the way that he speaks about his team and the way he goes about his business," Rodgers said. "I like his confidence. I’ve heard nothing but good things [about him] from guys that have played there. I like Tomlin."

McAfee remarked that the moment brought a buzz to Steelers Nation, but Rodgers was quick to temper expectations.

"I’m just speaking the truth. If you want to take that and run with it, say I’m angling for some sort of next team, I’m not. I’m just answering the question for my respect for what Mike has accomplished over the years," the Packers star said.

Rodgers has led the Packers to three straight wins after a bad loss to the New Orleans Saints in Week 1. He has 897 passing yards, eight touchdown passes and two interceptions this season.