Hays faces the following charges out of Sauk County:

These charges are for the death of Czaczkowski, who was shot and killed while in a vehicle on I-90/94 on May 1st. She was returning to Illinois with her family. 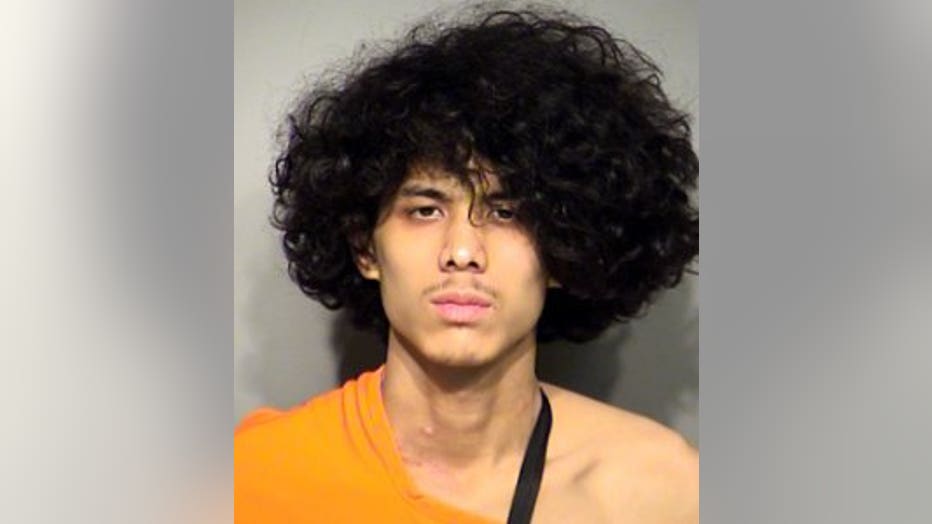 Hays faces one count of first degree reckless homicide out of Milwaukee County for the death of Gabriel Sanchez.

He'll next be in court in Milwaukee County on September 12th for his arraignment. In court on August 18th for his preliminary hearing, probable cause was found for further proceedings in this case. Hays pleaded not guilty. Cash bond has been set at $100,000.

A Milwaukee County judge ordered a competency evaluation of Hays in June after the defense raised concerns about his mental health. The court found Hays competent to proceed after a doctor’s report was returned at the end of July.

Hays has a third open case filed out of Columbia County -- where he's charged with five counts of first degree recklessly endangering safety and one count of fleeing/eluding an officer.

Hays was shot and wounded by Columbia County Sheriff's deputies following the drive-by shooting on I-90/94 -- ending a pursuit. He will be in court in October 28th in that county for his arraignment. 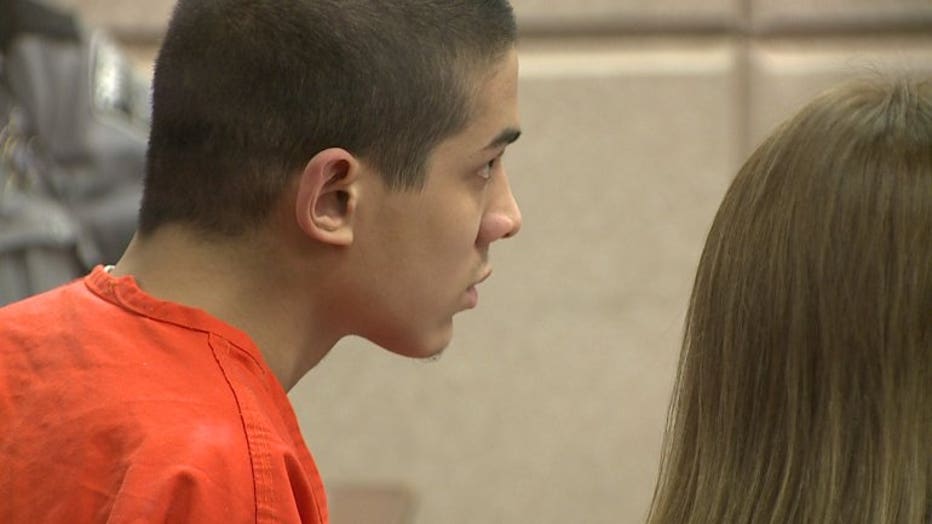 Hays was released from the hospital on May 25th following treatment of wounds suffered in that officer-involved shooting.

This all began early in the morning on May 1st in West Allis.

According to the criminal complaint filed in Milwaukee County, on May 1st, officers were dispatched to the apartment building in West Allis in response to a call indicating someone was trying to kick down a door and enter a home in that building. Police soon learned a person had been shot. 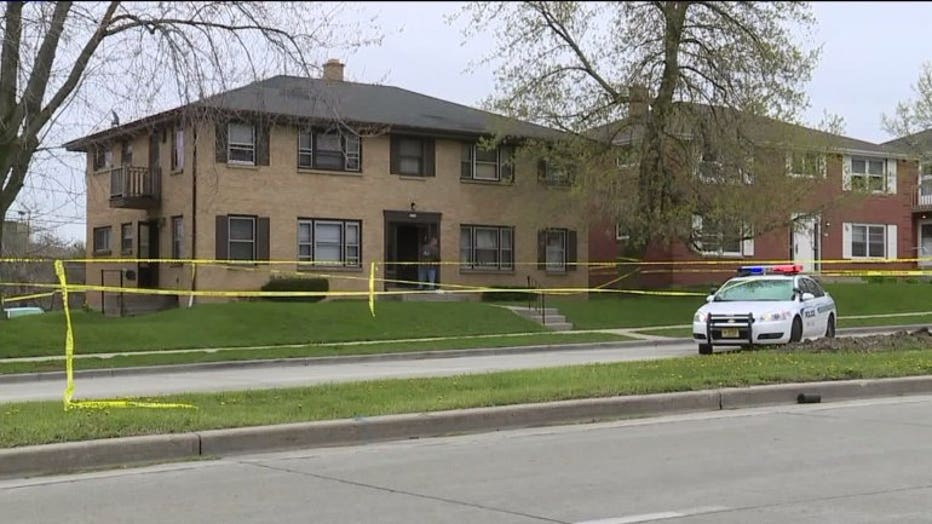 An investigation revealed Gabriel Sanchez and his family lived in Apartment #2, and his body was found laying in the doorway. Sanchez had suffered a gunshot wound to the middle of his chest. He was taken out of the apartment building and moved to an ambulance, where he was pronounced dead.

An autopsy revealed Sanchez died as a result of that gunshot wound to his chest.

Investigators spoke with a witness -- a woman who lived with Gabriel Sanchez, along with their two sons. She indicated on the morning of May 1st, an individual who lived in Apartment #3 began to bang on the door to her apartment. She answered the door, and said the man who was banging on the door asked for a key to the basement. She told him she would go get it, and when she returned, the man was gone. The witness told police she heard banging coming from Apartment #3.

A short time later, the man returned to her unit, and she gave him the key to the basement.

The witness told police the man went to the basement door and tried to put the key in the lock, but it appeared as though he was having problems. When she asked for the key back, the woman told investigators the man said "Where is my brother?"

The woman said the man then tried to get into her apartment, so she shut the door on him.

The complaint indicates the woman told police the man then began pushing hard on her door, and Gabriel Sanchez got up and began to push the door closed.

The man from Apartment #3 indicated his brother was inside Apartment #2, according to the complaint.

The woman told police the man pulled a gun and shot into their apartment -- hitting Gabriel Sanchez. 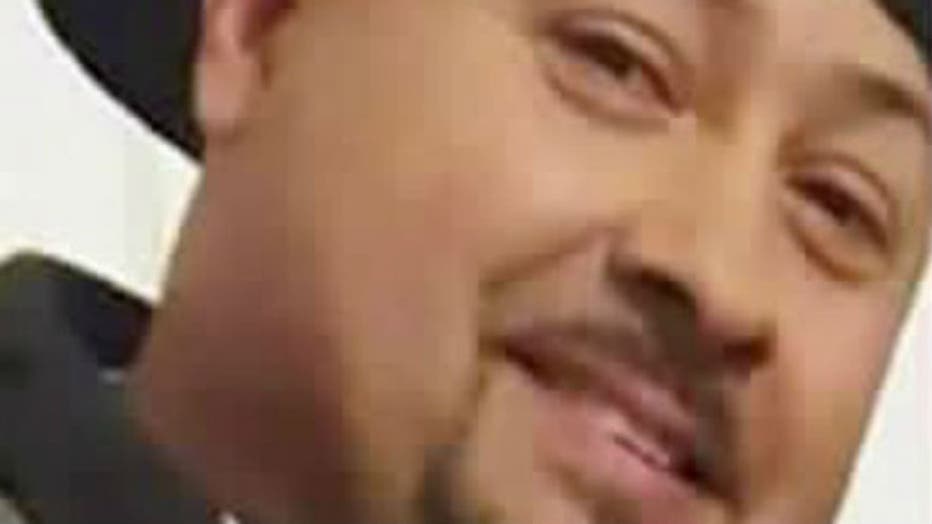 According to the complaint, the woman said Sanchez told her to run, and shortly thereafter, the man with the gun reached inside the apartment and fired again.

The woman and her two boys ran into the bathroom and attempted to close and lock the door, but the man pushed the door open -- pointing the gun at them. The woman said her son told the man he could take all their money as long as he didn't shoot them.

The woman told investigators the man then "gave them a blank stare" and left the apartment.

The complaint indicates two bullet holes were found in the door leading into Apartment #2. 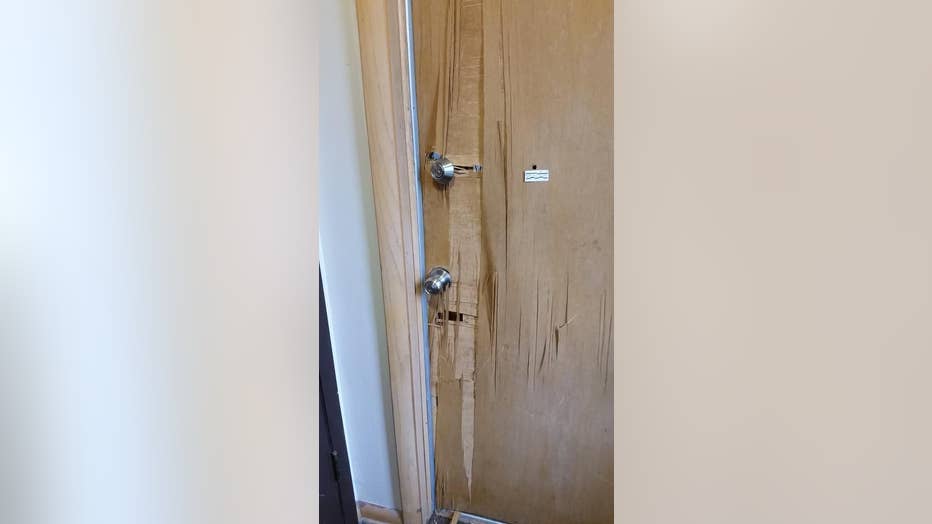 The woman was able to identify the shooter via a photo lineup -- identifying him as Zachary Hays.

A fund has been set up in Gabriel Sanchez's honor.

Hays is also charged in connection with the shooting death of 44-year-old Tracy Czaczkowski -- who died at the hospital after a drive-by shooting on I-90/94 in Sauk County. 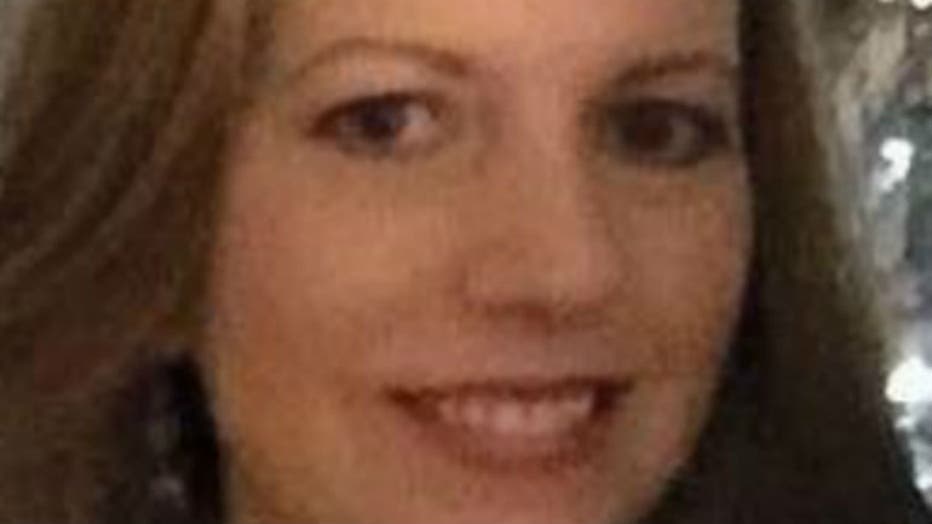 The complaint filed out of Sauk County against Zachary Hays indicates officials spoke with Zachary Hays' brother, Jeremy -- who indicated he was a passenger in a Chevy Blazer on May 1st, and Zachary was driving.

Jeremy told investigators Zachary had smoked some marijuana on April 27th and had been "acting extremely paranoid" ever since. 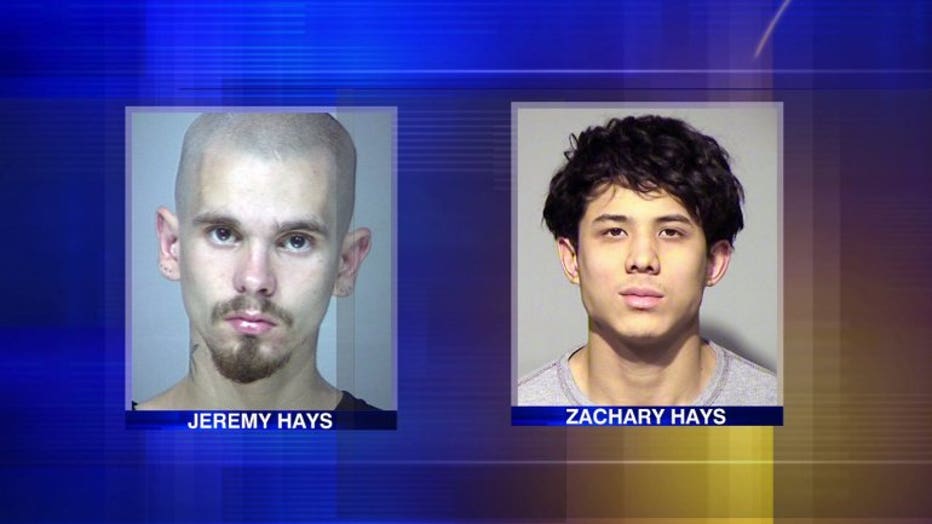 Jeremy said he was concerned for his own safety -- as Zachary was carrying a handgun and a long barreled .45 caliber revolver.

According to Jeremy's statement to investigators, Zachary had made threats to kill Jeremy and the 34-year-old brother if they left him.

Jeremy said on Sunday afternoon, they stopped at a gas station near a Burger King restaurant in the Dells -- and then got onto I-90/94 -- headed eastbound.

Zachary had the .45 caliber pistol in his lap, and was "pointing it at cars as they drove by," Jeremy said.

FOX6 News spoke with a couple who said the drive-by shooting played out right in front of them.

"He tried to hit the SUV in front of us and then there was a black car in front of the SUV. Next thing I know, everyone is slamming on their brakes and the black car shot onto the median and a couple other cars shot onto the shoulder," the couple said.

The couple said they had no idea someone had been shot. They followed the Blazer, but soon realized that wasn't safe.

"We`re watching him aim the gun out the window and then several times, he turned around, looked right at us, and aimed the gun at us," the couple said.

The couple says their two grandchildren, ages seven and 10, were riding in the back seat.

"We know the 10-year-old did see the gun at one point," the wife said. "Immediately, the first thing he said was ‘don’t worry honey, it’s just a BB gun,’ and she just went back to listening to her music then." 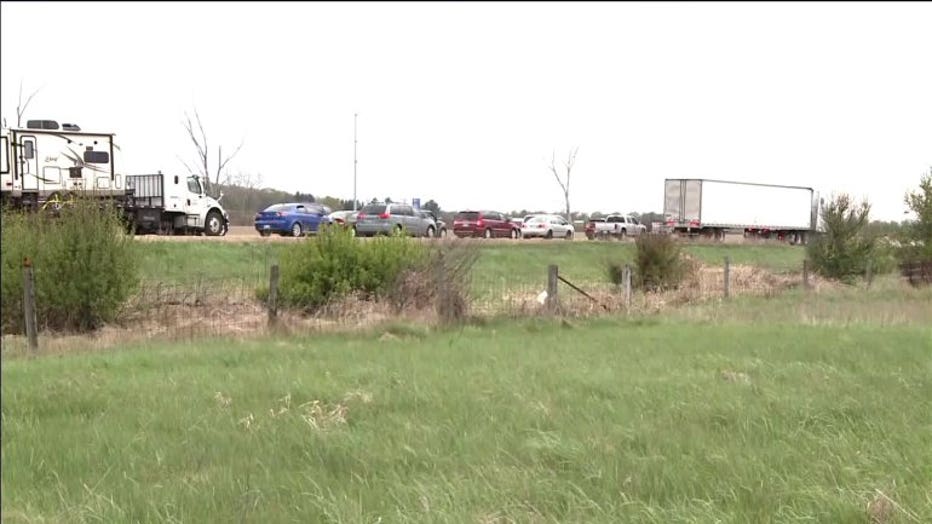 The couple kept their distance, and tried to warn passing drivers of the danger ahead. They say the suspect was taunting them.

"He kept trying to wave me up to come alongside of him," the husband said. "I wouldn’t, and then he started getting madder and madder. He started flippin’ me off and he kept going back and forth in the two lanes."

Jeremy Hays said his brother was "particularly paranoid about cars that had tinted windows."

One of those shots hit Tracy Czaczkowski in the neck. She was pronounced dead on May 2nd, and an autopsy was performed on May 4th -- indicating Czaczkowski died as a result of the gunshot wound. 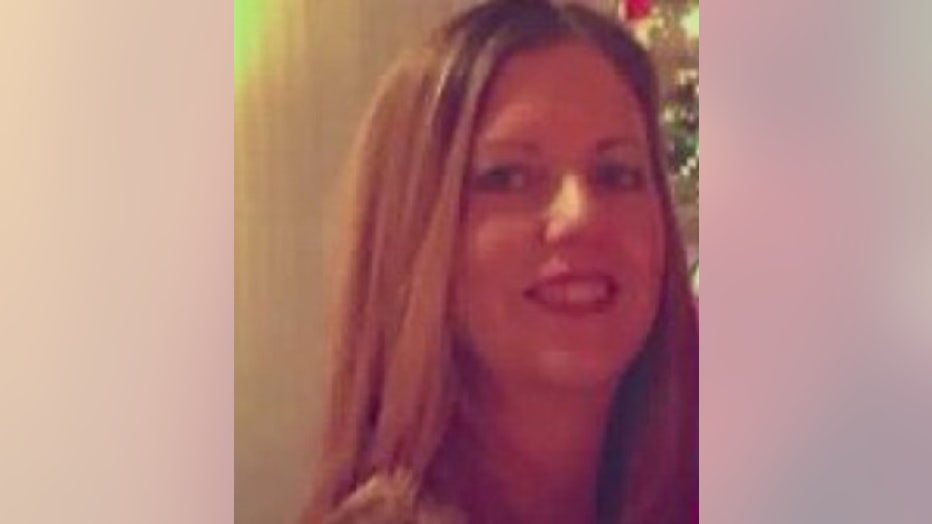 A statement from the DEA indicated Czaczkowski's husband and two children were in the vehicle at the time of the shooting. They were headed home from the Dells.

Czaczkowski's husband has worked for the DEA for 11 years.

A fund has been set up in Czaczkowski's honor.

After the shooting, the complaint indicates the vehicle containing the three brothers "accelerated to approximately 90 miles-per-hour eastbound on I-90/94. Their vehicle was stopped in Dane County by "spike strips."

Zachary Hays, Jeremy Hays and the 34-year-old brother were taken into custody after Zachary Hays was shot by deputies.

Officials said Zachary Hays exited his vehicle after it was disabled by the spike strips -- and advanced toward law enforcement officials while armed.

He was then shot by two Columbia County Sheriff's deputies -- with 9.5 and 4.5 years of service.

Those deputies were placed on administrative leave, per policy. 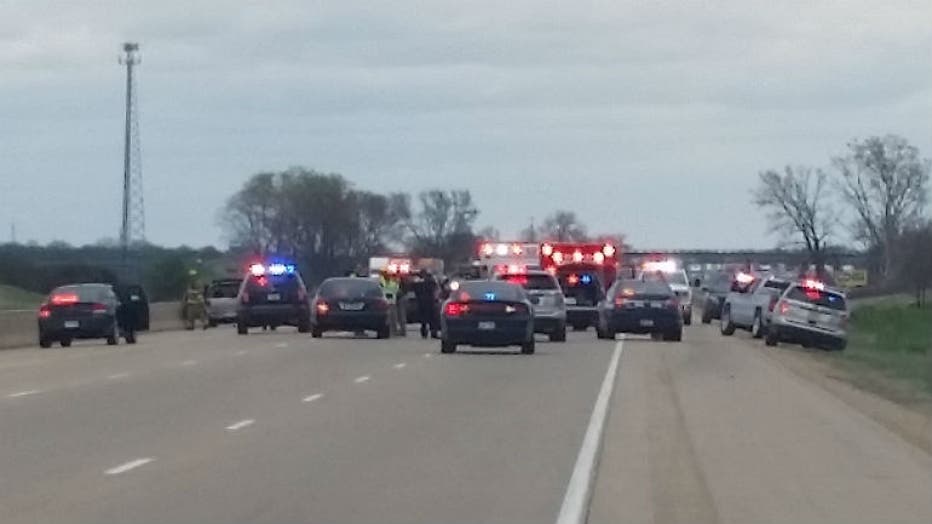 Report of person shot in traffic on Hwy 39 near DeForest