“You need to get somebody here quick:” 911 calls reveal new side of Lake Geneva ice debacle

"You need to get somebody here quick:" 911 calls reveal new side of Lake Geneva ice debacle

LAKE GENEVA -- It's not something you see every day -- more than a dozen vehicles under water. That is what many saw last weekend on Geneva Lake after the ice people parked on broke. Fifteen vehicles were partially submerged. Now, we're hearing more about it through 911 calls from Saturday, February 6th.

Caller #1: "You've got one truck, the front tires just broke through. It's up to the front grill."

Dispatcher: "Is that along the shore or is that on the lake?"

Caller #1: "No, you've got about 50 cars on the water. This one is on the water and the front tires just went through the ice."


Fifteen cars parked on Geneva Lake ended up falling through the ice and into the water. As the situation got worse, the calls kept coming.

Caller #2: "Are you guys aware that the cars where you park the boats here in Lake Geneva are going under the water? The ice is breaking."

The vehicles were not the only thing out on the quickly-breaking ice.

Caller #2: "There are people still getting in their cars and driving out right now."

Dispatcher: "Unfortunately, we can't do anything about the people on the lake. If they want to go out on the lake, we can't prevent that from occurring. But I'll send an officer down."

Nobody was injured in all of this chaos. Five of the vehicles were able to be driven off the ice without incident. But 10 were a total loss. Emergency crews spent the rest of that day clearing the lake -- working late into the night.

No citations were issued in connection with this incident. 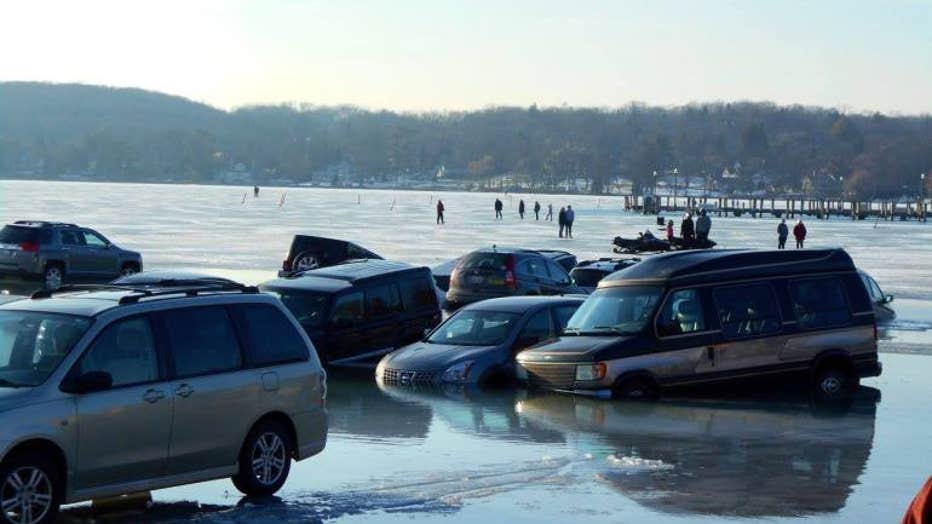