Shaikh, chairman of the VISIT Milwaukee board, also saw the international attention hosting a convention would bring as a chance for the city along the shores of Lake Michigan to show the world how it's evolved from a Rust Belt manufacturing hub to a thriving, diverse, modern community. 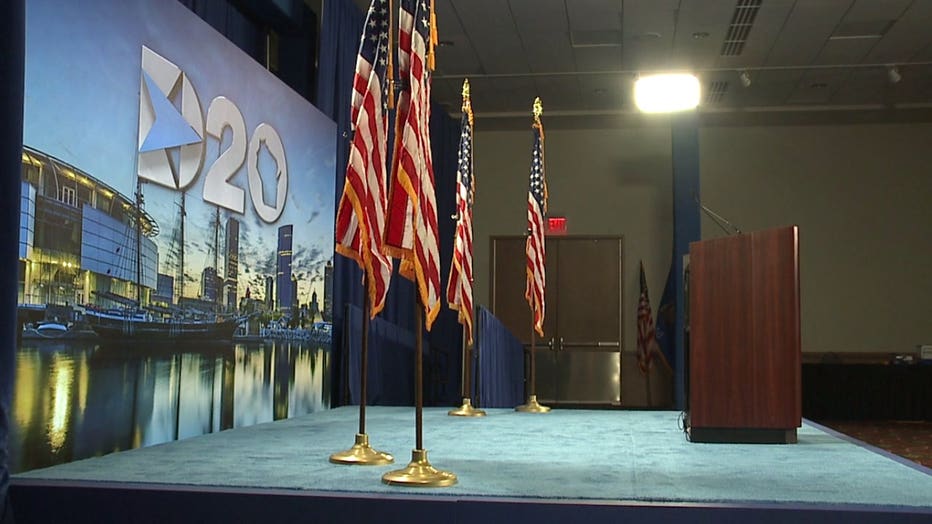 Now, with the convention that begins Monday nearly entirely online due to the coronavirus, Shaikh and Wisconsin Democrats, who a year ago triumphantly hoisted glasses of Milwaukee's finest after winning the competition to host the convention, are crying in their beer.

“It is a gut punch,” Shaikh said. “It’s almost like you get the call you (won) the lottery, but you can’t cash the ticket in.”

The convention was originally to have taken place in July, attracted about 50,000 people to Milwaukee and injected about $250 million into the economy of the key presidential battleground state. It would have been the first time Milwaukee, a metropolitan area of 1.6 million, hosted a presidential nominating convention.

Milwaukee, in many ways, had been working the past decade toward this moment. An Upper Midwest city that suffered during a decline in manufacturing that began in the late 1970s, Milwaukee is often stereotyped as the home of Miller Beer, Harley-Davidson, and the '70s sitcoms “Happy Days” and “Laverne and Shirley.” Sports fans know it as home to the Bucks and the Brewers, but little else.

“You hear the phrase so often, ‘flyover country,’” said John Gurda, a historian who has written multiple books about Milwaukee. “I think people were looking at the DNC as Milwaukee’s moment to be in the national spotlight and have some welcome attention shined on a city that is kind of in the shadows of American cities and richly deserves not to be.”

The convention was to be held in the 2-year-old, $500 million Fiserv Forum, home to the Bucks. In the years leading up to the convention, about $5 billion was spent on projects in and around downtown, including luxury apartment buildings, hotels and a 25-story office building. A new streetcar began running a 2.5-mile (4-kilometer) route in 2019, going south from the city’s lakeshore to downtown.

Organizers were eager to tell the story of a resilient, post-industrial city that is home to thriving, diverse neighborhoods, a vibrant restaurant scene and a growing tech industry.

“Milwaukee is, I think, exactly what you’re looking for for a 21st century city where you can live, work and play,” said Alex Lasry, senior vice president of the NBA’s Milwaukee Bucks and one of the driving forces to land the convention.

Organizers also planned to highlight Democrats’ commitment to the city and Wisconsin, a state President Donald Trump won by fewer than 23,000 votes in 2016 and where this year's race may again be decided.

Meanwhile, protesters hoped to highlight deep segregation that has scarred the city for decades and led to renewed demonstrations this summer following the death of George Floyd while in Minneapolis police custody.

Protests are still expected, but — much like the convention itself — with only a fraction of the people previously anticipated.

Shaikh's restaurant, Carnevor Steakhouse, is near several hotels that would have been packed with delegates and other convention attendees. It's been closed since mid-March. Shaikh is opening it Tuesday night, with capacity cut in half so diners can keep an appropriate distance due to the virus.

“It’s like one kick in the teeth after another, man,” Shaikh said.

U.S. Rep. Mark Pocan, whose district is in Madison, would have had a prominent role in the convention as a delegate and co-chair of the Congressional Progressive Caucus. Now he’s not even coming.

“There’s no reason to,” Pocan said. “You can’t do a convention. It would be irresponsible. The Republicans even get that. This is just the way we have to do this to make sure people are safe.”

Like the Democrats, Republicans have scrapped their plans for a traditional convention and are instead also planning a mostly virtual event. However, to needle Biden for not traveling to Milwaukee, Trump planned a rally Monday in Wisconsin just as the convention is kicking off.

Those who worked to bring the convention to Milwaukee argue the city should be first in line for a future convention. And they're looking for bright spots wherever they can find them.

“All of the assets and amenities that made Milwaukee a winning competitor for the biggest show in the political universe are still here,” said Steve Baas, senior vice president of governmental affairs at the Metropolitan Milwaukee Association of Commerce. “Milwaukee is really a region on the rise in terms of its community, its culture, its amenities. There’s a lot of optimism here.”

Still, there is no getting around what could have been.

“It does suck,” Lasry said.

'COVID is real:' Delegates disappointed, but say a mostly virtual DNC is 'the right decision for the public'

Milwaukee once expected crowds of 50,000, and with them, millions of dollars for area businesses. Once upon a time, delegates were supposed to be packing into Fiserv Forum for the DNC. Then, COVID-19 hit.

The Wisconsin Center is prepped for what is now a mostly virtual 2020 Democratic National Convention.