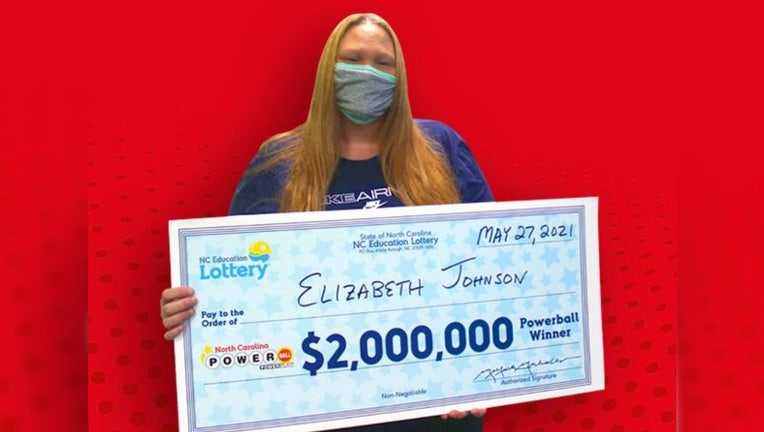 RALEIGH, N.C. - A North Carolina woman is now a millionaire after she accidentally bought a lottery ticket for the wrong night's drawing.

Lottery officials said Elizabeth Johnson was rushing to buy a ticket for Wednesday's Powerball drawing, and thought she purchased the ticket online in time -- but missed the 9:57 p.m. cutoff by one minute. It turned out, she had actually bought a ticket for Saturday's drawing instead.

Her lucky $3 Power Play ticket matched the numbers on all five white balls to win $1 million in Saturday's drawing -- and her prize was doubled to $2 million when the 2X multiplier was drawn. The lotto said the odds of matching all five white balls are 1 in 11.6 million.

"When I got the message saying that I had won I thought, ‘Well, I didn’t even play tonight,’" Johnson said. "It was definitely a shock!"

Johnson took home $1,415,001 after taxes, and says she plans to buy a house and take a vacation with her family.

"The kids want to go to Disneyland," Johnson said. "We’ve never been and now we’ll get to."