LOS ANGELES - A woman is suing the city of Los Angeles, Los Angeles County and the state of California, alleging all share liability for injuries she received when she was hit by a car in 2020 after being forced to walk on the street in Hollywood because a homeless encampment blocked her access to a sidewalk.

Todd was walking through the "sprawling homeless encampment" along North Gower Street, north of Yucca Street, under the 101 Freeway last Oct. 4 when she had to step onto the street because there was no room left to stay on the sidewalk, the suit states. 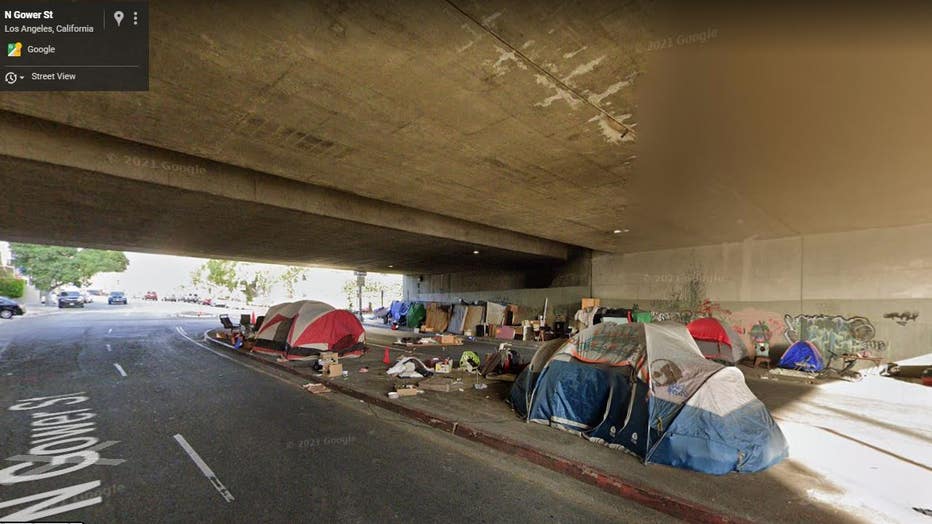 An image from Google Maps shows the encampment under the 101 Freeway at North Gower Street where a woman was allegedly struck by a vehicle because she was unable to walk on the sidewalk, according to a lawsuit. (Credit: Google Maps)

Todd was hit by a vehicle going south on Gower by a driver who had no warning of a collection of homeless people so large that people were forced to walk on the street, the suit states.

"The sprawling encampment also obstructed (Todd's) view of the oncoming driver, and vice versa, immediately prior to the impact," the suit states.

Todd suffered injuries to her head, leg, arm, hip and back, according to the suit.

All of the defendants were aware the encampment and the dangerous condition it created had existed for a long time, yet they failed to warn Todd and other members of the public, according to the suit.