Gov. Tony Evers is at Steffens Dairy Farm in Seymour for an announcement relating to a major investment and expansion project in Wisconsin's dairy sector.

SEYMOUR, Wis. - The state of Wisconsin will be supporting the expansion of Agropur Dairy Cooperative in Little Chute with up to $4.5 million in business tax credits from the Wisconsin Economic Development Corporation (WEDC).

A news release says Agropur, one of the world's largest dairy suppliers, will be building a new $168 million state-of-the-art cheese factory in Little Chute that will set the company up for future success in Wisconsin by investing in the latest cheesemaking technology and making room for growth.

Agropur will be eligible for up to $4.5 million in business tax credits over the next four years based on meeting hiring and capital expenditure goals. 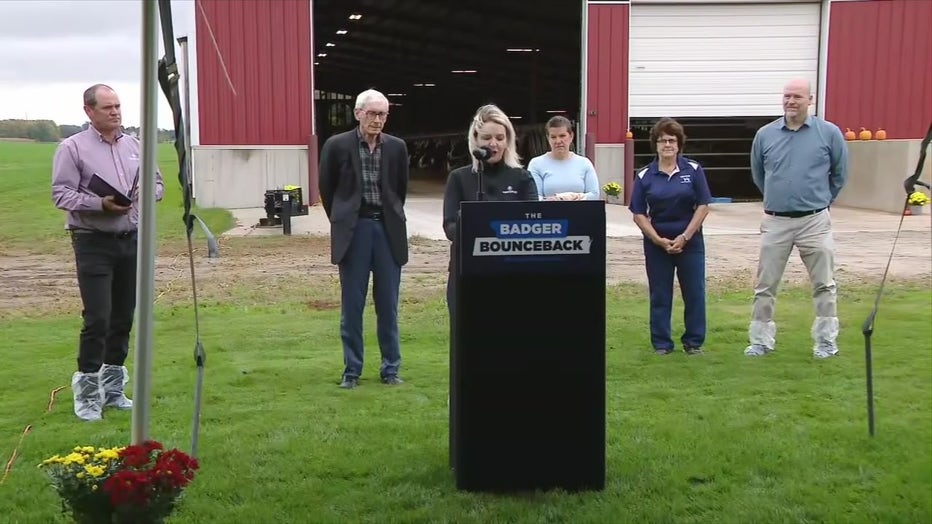 The new Agropur cheesemaking facility is under construction on 24.5 acres in the Village of Little Chute. The 210,000 square foot facility will allow Agropur to increase its production and make future expansions in Little Chute possible. The facility’s milk processing would more than double from 300 million pounds a year to 750 million pounds with about 85 percent of that milk coming from within 40 miles of the plant.

Today’s announcement took place at Steffens Dairy Farm, an Agropur supplier near Seymour. The farm is run by Lorraine Steffens and her sons, Steve and Dan. The family, which has owned the farm since 1971, milks 130 cows on about 300 acres.

Bucks to require vaccine, testing to sit near court

The Bucks will require all fans seated within 15 feet of the court at Fiserv Forum to be fully vaccinated against COVID-19 or to provide proof of a negative COVID-19 test taken within 48 hours of the game, a release said Monday.