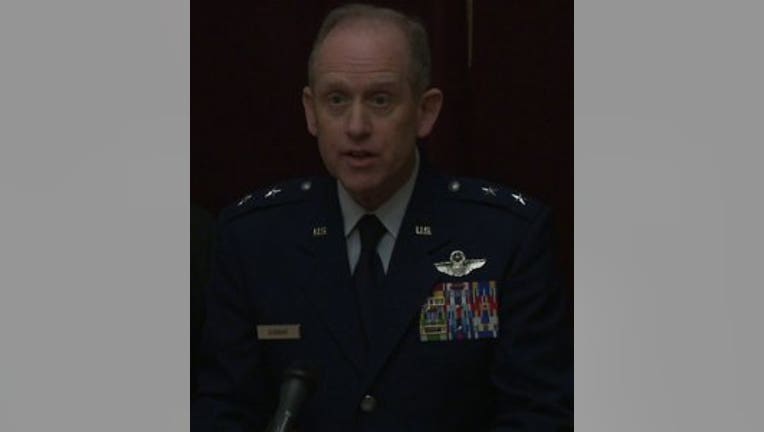 MADISON — The commander of the Wisconsin National Guard agreed to resign at Gov. Tony Evers' request Monday, following the release of a scathing federal report that found the Guard defied federal law, regulations and policies for years over the handling of soldiers' sexual assault and harassment complaints.

The report from the National Guard Bureau in Washington, D.C., found the Guard allowed internal investigations in defiance of federal law as well as Department of Defense and bureau policy; investigators falsely presented themselves as working for the federal bureau; case records were mismanaged; and Guard sexual assault response policies were not in compliance with federal regulations for more than five years.

Evers' office said in a statement that the governor asked the Guard's top leader, Maj. Gen. Donald Dunbar, to resign hours before his administration released the report Monday afternoon. Dunbar agreed to step down on Dec. 31.

Evers appointed Brig. Gen. Gary Ebben — the assistant adjutant general of the Wisconsin Air National Guard — as interim commander and will choose a permanent replacement, his office said. The governor also ordered the Guard to implement all of the report's recommendations for improvement by September.

“I am extremely upset and concerned with the ... findings,” Evers said in a statement. “Our service members deserve to be safe and supported while carrying out their important mission.”

Dunbar is the nation's longest-serving state National Guard commander. He was appointed in 2007 by then-Gov. Jim Doyle, a Democrat. He was reappointed twice by former Gov. Scott Walker, a Republican, and again by Evers, a Democrat, this past May. He has earned numerous commendations, including the Legion of Merit award for exceptional command performance. But the Guard has been shaken by recent allegations of officers brushing off sexual assault complaints and retaliating against victims for reporting incidents.

Among the report's key findings:

—Internal investigators were poorly trained and their probes lacked oversight, often resulting in incomplete findings and recommendations. They conducted their investigations alone, increasing the likelihood that their findings could be biased. They sometimes falsely presented themselves as bureau investigators.

—Victims were told to waive their right to criminal investigations by local police.

—Complaints weren't properly tracked and data was never entered in a Defense Department database as required.

—The Guard was supposed to have 28 victim support advocates to help sexual assault and harassment victims but had only one.

—The Guard's sexual assault policies haven't been updated since 2013 and don't include changes to federal laws and regulations to improve oversight and provide commanders guidance on caring for sexual assault victims.

—Guard officials reached an agreement with the state Justice Department in October 2018 spelling out that the Guard could refer sexual assault cases to the department. The report referenced an email written by then-Attorney General Brad Schimel's chief of staff saying the agreement was meant to “get the federal National Guard Bureau off the back” of Dunbar.

—Either the victim or the accused perpetrator or sometimes both were carrying loaded weapons while the investigation was ongoing, leaving open the possibility that one of them could shoot the other in retaliation.

Evers on Monday ordered the Guard to implement all the changes detailed in a corrective action plan submitted by bureau investigators, including updating written policies and communicating all disciplinary actions down to the company level. The bureau will oversee the implementation and conduct another review to ensure every issue has been addressed. The order also calls for the creation of an outside ombudsman who will oversee sexual assault complaints within the Guard.

Allegations that Wisconsin National Guard officers had been brushing aside sexual assault complaints and retaliating against victims came to light in November 2018 when Master Sgt. Jay Ellis complained to Baldwin about half a dozen incidents of sexual assault or harassment within his 115th Fighter Wing security squadron. Ellis wrote in a letter to the senator that his unit considers sexual misconduct “no big deal."

One of the women involved in an incident cited by Ellis told The Associated Press in an interview that superior officers sexually assaulted her and a friend during a 2002 party at a training base outside Las Vegas. She didn't file a formal complaint because she feared reprisal, but she did report the assault to her fire team commander, who passed on the report to a senior master sergeant, but it only resulted in the woman being harassed when her unit deployed to Iraq.

State Senate Majority Leader Scott Fitzgerald, a Republican who is running for Congress in 2020, asked Dunbar in February for a top-to-bottom review of Guard protocols for handling sexual assault complaints. Fitzgerald made the request after meeting with a female soldier who told him she twice informed her brigade leaders in 2014 that a master sergeant had been sexually harassing and inappropriately touching her colleagues for months. She said an investigator and rank reduction board found the master sergeant had acted inappropriately but he was allowed to retire with no punishment and was later hired back as a contractor.

Dunbar refused to launch such a probe, instead outlining the protocols in a letter to Fitzgerald and stressing that the Guard has “zero tolerance” for sexual misconduct.

Fitzgerald was less than pleased with that response, and questioned whether the Guard follows its own policies. Evers and Baldwin then stepped in and asked the bureau to launch a top-to-bottom review.

“I have a tremendous amount of respect for the service and sacrifice of our Wisconsin National Guard service members and I have worked for over a year to do right by courageous whistleblowers and brave survivors of sexual assault who came forward and contacted my office. I want to thank Governor Evers for joining me in calling for the National Guard Bureau’s Office of Complex Investigations to conduct this independent and comprehensive assessment of the Wisconsin National Guard’s handling of sexual assault and harassment.

“Our Wisconsin National Guard service members deserve leadership of unmatched integrity and a work environment free of sexual assault, harassment and the fear of retaliation. This National Guard Bureau report makes clear they have received neither. The failure of leadership, wrongdoing, and lack of accountability that has been uncovered demands change at the Wisconsin National Guard, including new leadership and implementing all of the report’s recommendations on how best to prevent sexual assault and harassment, and confront it with accountability when it occurs. Now that the first steps of change are being taken, I support Governor Evers’ executive order to work towards true justice for the survivors of sexual assault and accountability for those that committed crimes against them.”

“I was shocked by the media reports last night detailing how National Guard Bureau’s Office of Complex Investigations officials were appalled as they looked into the Wisconsin National Guard’s handling of sexual assault and harassment. Soldiers and my constituents asked me almost a year ago to bring this matter to the governor’s attention, and I’m grateful for the work that federal authorities did investigating these cases.

“As the one in charge of Wisconsin’s National Guard, the governor has a duty to respond to this pressing matter. I want to read the report and hear what OCI has to say on the specific shortfalls in Wisconsin. It is the responsibility of the Department of Military Affairs to keep the brave men and women serving our state safe. Clearly changes must be made.”

“I appreciate the swift action by Gov. Evers, Sen. Baldwin and the National Guard Bureau to conduct a thorough review of the Wisconsin National Guard and its handling of sexual assault, sexual harassment and retaliation. I want to commend all of the Guard members and survivors who came forward to share their experiences and expose this very troubling situation. This report is just the beginning of a long road ahead. I encourage other individuals who have experienced sexual assault, sexual harassment or retaliation to report their concerns and help to ensure that justice is served.”