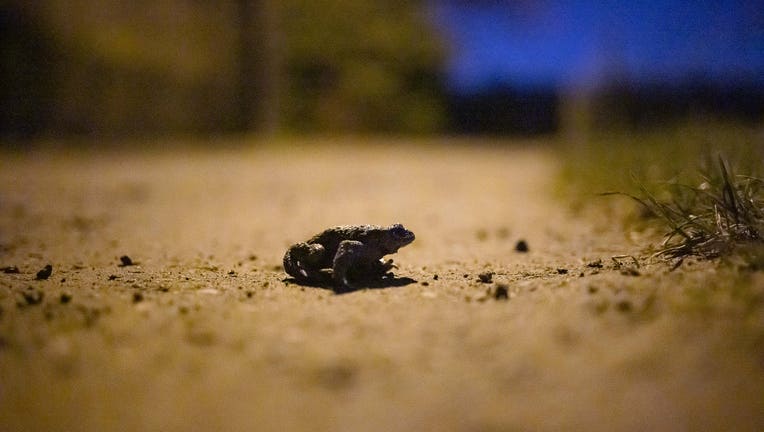 Illustration picture shows a toad crossing a road, in Sint-martens-Latem. Every year in spring, toads and frogs are leaving their wintering place to find wetlands site to reproduce themselves but on the way, some are killed by cars passing by. They a

MADISON, Wis. - Frogs will soon begin chorusing throughout Wisconsin and the Department of Natural Resources is looking for volunteers to lend their ears for help with frog and toad surveys.

One survey requires volunteers to drive along set routes three nights during the frog mating season. The other is a phenology survey, aimed at understanding how climate change may be affecting frogs, which people can complete at home or at a nearby wetland, lake or river.

Since both surveys occur at night after school and when the workday is done, the two surveys are great activities for families and can be completed while social distancing.

The Wisconsin Frog and Toad Survey (WFTS) is a citizen-based monitoring program coordinated by the DNR, in cooperation with the U.S. Geological Survey (USGS) .

Volunteers survey one night each in early spring, late spring and summer and make 10 stops per night (five minutes at each site). They identify the species calling and record that information and the relative abundance of each species.

New volunteers can learn the different calls to identify the species, as well as learn more about frog and toad biology and ecology, by watching a series of short videos on all 12 frog and toad species in Wisconsin.

Wisconsin bars and restaurants closed exactly one year ago Wednesday, March 17.&nbsp;While they were open for St. Patrick's Day 2021, the coronavirus pandemic has had a ''devastating impact.''