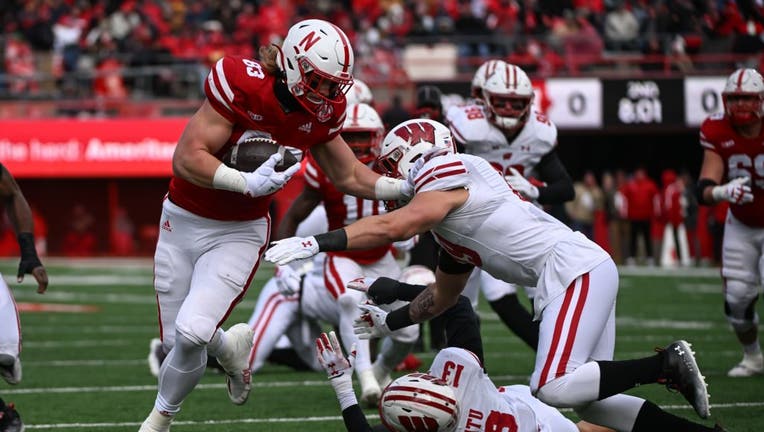 Travis Vokolek of the Nebraska Cornhuskers against safety Kamo'i Latu and linebacker Nick Herbig of the Wisconsin Badgers at Memorial Stadium on Nov. 19 in Lincoln, Nebraska. (Photo by Steven Branscombe/Getty Images)

LINCOLN, Neb. - Graham Mertz scored on a 2-yard quarterback sneak with 35 seconds left to complete Wisconsin's comeback from an 11-point deficit entering the fourth quarter, and the Badgers beat Nebraska 15-14 Saturday for their ninth straight win in the series.

The Badgers earned their grinding victory on a raw afternoon at Memorial Stadium after losing their top defensive player, Nick Herbig, to a targeting penalty in the third quarter and its top offensive player, Braelon Allen, to a leg injury on their second-to-last possession.

Mertz’s 10-yard TD pass to Skyler Bell cut Nebraska's lead to 14-9 early in the fourth quarter. Mertz was off target with his 2-point pass, leaving the Badgers down five with 10 minutes left.

Wisconsin started its final drive from midfield with 3:11 left. Mertz passed to Isaac Guerendo for 27 yards to set up a first-and-goal at the 7, and three plays later Mertz crashed over the goal line for the Badgers' first lead.

Nebraska's Casey Thompson, who missed the previous two games with an elbow nerve injury, threw two touchdown passes to Trey Palmer and finished 12 of 20 for 106 yards. Thompson was the Huskers' leading rusher, picking up 33 yards on 11 carries.

Chez Mellusi led the Badgers with 98 yards on 21 carries. Mertz was 8 of 18 for 83 yards on a day when the feels-like temperature was 16 degrees with a gusty north wind.

Herbig, the Big Ten sacks leader, was ejected for targeting when he hit a sliding Thompson in the head. By rule, Herbig must miss the first half of next week's rivalry game against Minnesota.

Herbig was called for unsportsmanlike conduct when he ran onto the field without a helmet to celebrate the Badgers' first touchdown. He had only one tackle after making eight with three sacks against Iowa last week.

Allen had 92 yards on 18 carries before he hopped off the field with an apparent leg injury late in the game.

Wisconsin: The Badgers had to work hard for this one even though they rushed for 235 yards and outgained the Huskers in total offense 318-171. There was no immediate word on the extent of Allen's injury.

Nebraska: This was a crushing loss for a team desperate for its first win since Oct. 7. The Huskers suffered a big blow when safety Marquis Buford left with a leg injury on the second play.

Wisconsin hosts Minnesota on Saturday looking to get back Paul Bunyan's Axe.

Nebraska closes on the road at Iowa, which has beaten the Huskers seven straight times.