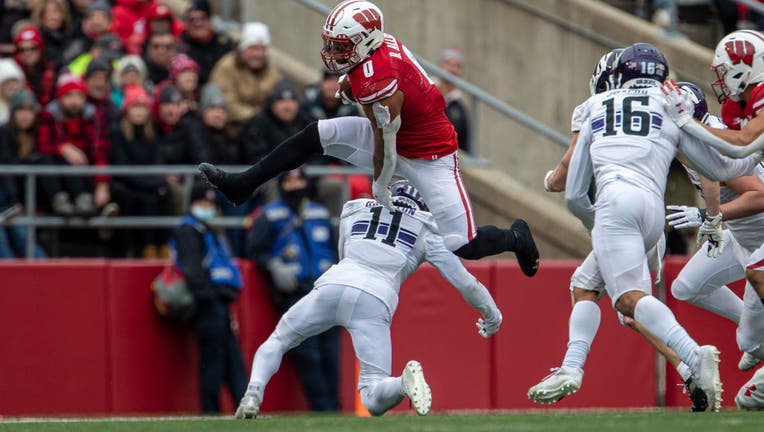 MADISON, Wis. - Braelon Allen rushed for 173 yards and three touchdowns to help No. 20 Wisconsin beat Northwestern 35-7 for its sixth consecutive victory on Saturday.

Wisconsin (7-3, 5-2 Big Ten) entered the day in a four-way tie for the Big Ten West lead with Minnesota, No. 19 Iowa (No. 20 CFP) and Purdue (No. 19 CFP). The Badgers already have beaten Iowa and Purdue. They visit Minnesota on Nov. 27 to close the regular season.

The Badgers were playing their first game since losing running back Chez Mellusi to a season-ending knee injury. Mellusi, who got hurt during a 52-3 victory at Rutgers last week, entered Saturday’s action ranked fifth in the Big Ten in rushing (815) and second in carries (173).

Allen picked up the slack.

The 17-year-old freshman had the most productive performance of his young career while rushing for more than 100 yards for a sixth straight game. Allen totaled just 12 carries in Wisconsin’s first four games while the Badgers staggered to a 1-3 start.

Allen had seven carries for 86 yards during a 95-yard drive that put Wisconsin ahead for good. He started that series with a 37-yard scamper and ended it with a 2-yard touchdown.

The most spectacular of his 25 carries came late in the third quarter when he bounced off three defenders in the first 10 yards of a 33-yard touchdown that extended Wisconsin’s lead to 35-0.

Mertz completed his first nine pass attempts and went 18 of 23 for 216 yards, including touchdown passes of 13 yards to Danny Davis and 11 yards to Jake Ferguson. He completed passes to nine different teammates and was intercepted once.

Northwestern marched 82 yards on 19 plays in its first series, but the drive ended when Caesar Williams picked off a Marty pass in the end zone. Marty was trying to throw to Stephon Robinson Jr. on second-and-goal from the 10.

Wisconsin still hasn’t allowed an opponent to score on its opening possession this year.

Northwestern: Poor run defense and inconsistent quarterback play has hurt Northwestern all season. Marty, one of three Northwestern quarterbacks to start games this season, went 10 of 18 for 100 yards. Ryan Hilinski took over in the fourth quarter and went 3 of 8 for 25 yards with one interception. Northwestern entered the day ranked 124th out of 130 Football Bowl Subdivision teams in yards rushing allowed per game (224.89) and 121st in yards allowed per carry (5.4).

Wisconsin: The Badgers entered the weekend leading the nation in total defense, and they’ve gotten even more dangerous on that side of the ball now that they’re forcing turnovers.

Wisconsin should rise a few spots as it tries moving closer to the top 15.

Wisconsin: Hosts Nebraska on Saturday in its home finale.