On the morning of Oct. 27, the Silverado Fire raging in Orange County grew to 11,199 acres and was 5 percent contained.

IRVINE, Calif. - Two out-of-control wildfires on Tuesday raged in Southern California as crews worked for a second day to contain the flames and thousands of people were forced to evacuate from their homes.

Meanwhile, dangerous fire weather raised the risk for new flames to erupt across the region, officials said. The National Weather Service issued a red flag warning earlyTuesday amid strong winds, however, that warning is set to expire Tuesday evening as winds start to weaken.

The two fires, called the Silverado Fire and the Blue Ridge Fire, broke out Monday in brushy hills near cities in Orange County, south of Los Angeles. 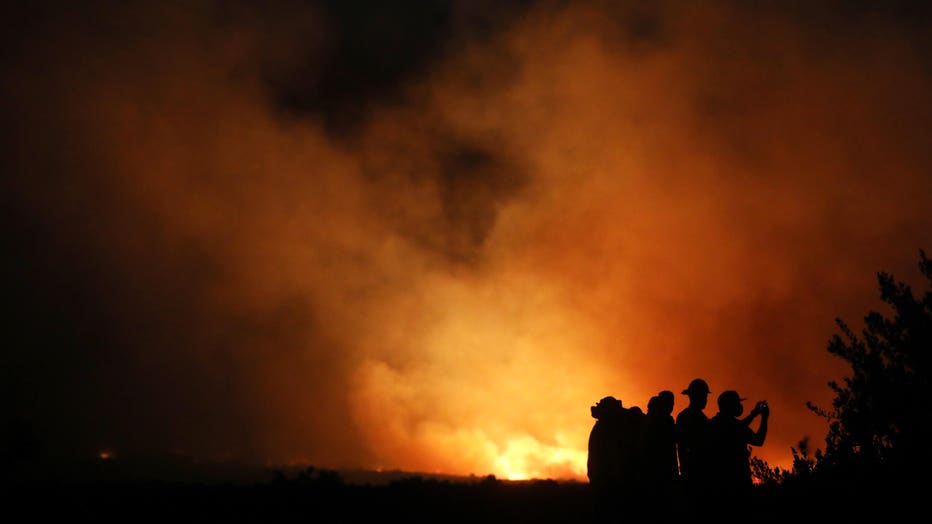 Firefighters and onlookers gather during the Silverado Fire in Orange County on Oct. 26, 2020 in Lake Forest, California. (Photo by Mario Tama/Getty Images)

The Silverado Fire first erupted in Santiago Canyon, located in the Santa Ana Mountains in eastern Orange County, and had grown to more than 12,200 acres with 5% containment, as of Tuesday afternoon. Roughly 72,000 residents were forced to flee their homes in the Irvine and Lake Forest areas, officials said.

Two firefighters, ages 26 and 31, were critically injured battling the flames. They each suffered second- and third-degree burns over large portions of their bodies and were getting help breathing at a hospital, officials from the Orange County Fire Authority said.

The wind-driven Blue Ridge Fire erupted Monday afternoon in Riverside County and quickly spread into Orange County, damaging at least 10 homes and threatening more in the suburban city of Yorba Linda and beyond. As of Tuesday afternoon, the flames had burned 15,200 acres and was 0% contained, according to fire officials.

Southern California Edison reported to regulators that it was investigating whether its equipment might have sparked the Silverado Fire. The utility said a wire that lashed a telecommunications line to a supporting cable may have struck a 12,000-volt conducting line above it.

Edison was among the utilities in California that deliberately cut power to customers to prevent equipment from being knocked down or hit with debris in the winds and sparking wildfires. Utility equipment has been blamed for several destructive fires in recent years.

Forecasts call for Santa Ana winds topping 50 mph at times over much of Southern California, with some of the strongest gusts howling through Orange County. The gusty winds left thousands of people without power on Monday evening and blew tress into power lines throughout the region.