The funeral service of former Pope Benedict XVI got underway in St Peter’s Square in the Vatican on January 5, 2023, attended by thousands of mourners. Credit: Elise Ann Allen via Storyful

VATICAN CITY (AP) - With bells tolling, tens of thousands of faithful, political leaders and the pope himself mourned Benedict XVI, the German theologian who made history by resigning the papacy, at a rare requiem Mass Thursday for a dead pontiff presided over by a living one.

The crowd applauded as pallbearers carried Benedict's cypress coffin out of the fog-shrouded St. Peter's Basilica and rested it before the altar in the vast square outside. Pope Francis, wearing the crimson vestments typical of papal funerals, opened the service with a prayer and closed it an hour later by solemnly blessing the simple casket — decorated only with the former pope’s coat of arms. 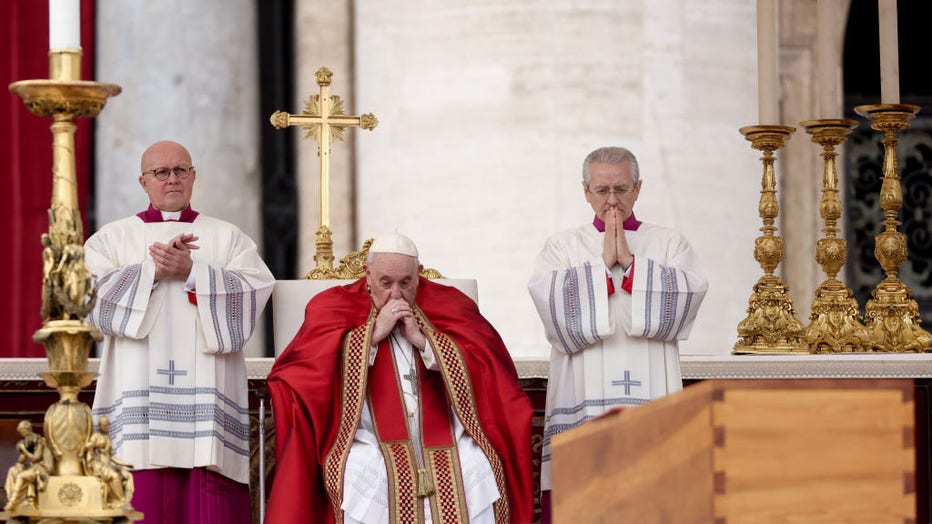 Heads of state and royalty, clergy from around the world and regular people flocked to the ceremony, despite Benedict’s requests for simplicity and official efforts to keep the first funeral for an pope emeritus in modern times low-key.

The event was also significant for what it lacked: the feeling of uncertainty that would normally accompany the passing of a pope before a new one is elected. With Francis very much in charge, Benedict’s death marked the end of an unusual decade in which a reigning pope lived alongside a retired one.

"Benedict has been the bridge between (St. John Paul II) and Francis," said Alessandra Aprea, a 56-year-old from Meta di Sorrento near Naples. "We could not have Francis without him."

Ignoring exhortations for decorum at the end, some in the crowd held banners or shouted "Santo Subito!" — "Sainthood Now!" — echoing the spontaneous chants that erupted during John Paul's 2005 funeral.

The former Joseph Ratzinger, who died Dec. 31 at age 95, is considered one of the 20th century’s greatest theologians and spent his lifetime upholding church doctrine. But he will go down in history for a singular, revolutionary act that changed the future of the papacy: He retired, the first pope in six centuries to do so. 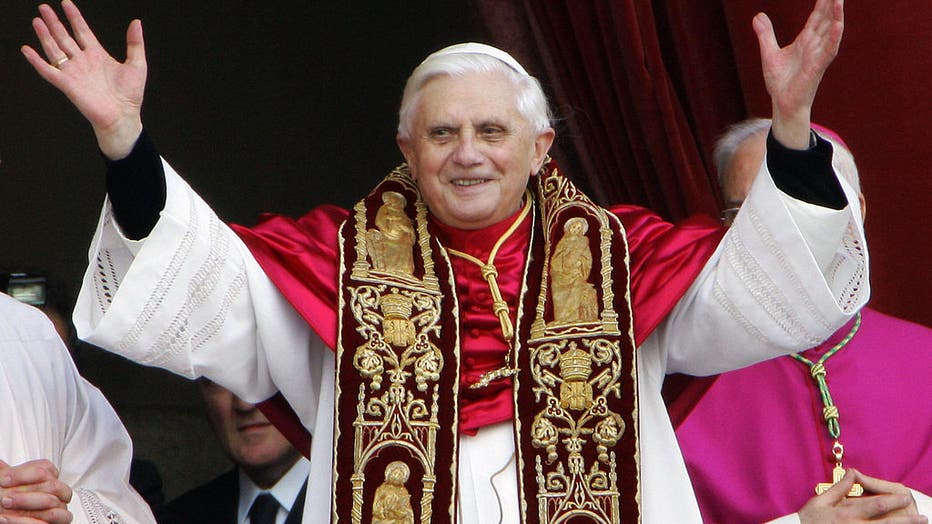 VATICAN CITY, Vatican: Germany's Joseph Ratzinger appears at the window of the main balcony after being elected the 265th pope of the Roman Catholic Church 19 April 2005 at the Vatican City. Ratzinger will take the name Benedict XVI, the Vatican anno

Francis has praised Benedict’s courage to step aside, saying it "opened the door" to other popes to do the same.

The Vatican said some 50,000 people attended the Mass, after some 200,000 paid their respects during the three days of public viewing.

Only Italy and Germany were invited to send official delegations, but other leaders took the Vatican up on its offer and come in their "private capacity." They included several heads of state, at least four prime ministers and two delegations of royal representatives. In addition, a host of patriarchs joined 125 cardinals in the seats to the side of the altar, and the Russian Orthodox Church sent its foreign envoy.

Many mourners hailed from Benedict’s native Bavaria and donned traditional dress, including boiled wool coats to guard against the morning chill.

"We came to pay homage to Benedict and wanted to be here today to say goodbye," said Raymond Mainar, who traveled from a small village east of Munich for the funeral. "He was a very good pope."

Among those attending was Hong Kong Cardinal Joseph Zen, who was given special court permission to attend the funeral. Zen was detained in May on suspicion of colluding with foreign forces under a China's national security law after he fell afoul of authorities over his participation in a now-silenced democracy movement. His passport was revoked when he was detained.

Benedict’s close confidants were also in attendance, and the former pope’s longtime secretary, Archbishop Georg Gaenswein, bent down and kissed a book of the Gospels that was left open on the coffin before the ceremony began.

Matteo Colonna, a 20-year-old seminarian from Teramo, Italy, said he came in part because of the historic nature of the funeral — but also because it had personal resonance for him.

"The first spark of my vocation started under the pontificate of Benedict, but then it became even stronger under Pope Francis," Colonna said, while sitting in prayer in St. Peter’s Square at dawn. "I see a continuity between these two popes and the fact that today Francis is celebrating the funeral in Benedict’s memory is an historical event."

Monsignor Kevin Irwin, a priest of the Archdiocese of New York, joined LiveNOW from FOX's Josh Breslow to discuss the legacy of Pope Benedict XVI. The retired pope passed away Saturday at the age of 95.

Early Thursday the Vatican released the official history of Benedict's life, a short document in Latin that was placed in a metal cylinder in his coffin before it was sealed, along with the coins and medallions minted during his papacy and his pallium stoles.

The document gave ample attention to Benedict's historic resignation and referred to him as "pope emeritus," citing verbatim the Latin words he uttered on Feb. 11, 2013, when he announced he would retire.

The document, known as a "rogito" or deed, also cited his theological and papal legacy, including his outreach to Anglicans and Jews and his efforts to combat clergy sexual abuse "continually calling the church to conversion, prayer, penance and purification."

Francis didn’t mention Benedict’s specific legacy in his homily and only uttered his name once, in the final line, delivering instead a meditation on Jesus’ willingness to entrust himself to God’s will.

"Holding fast to the Lord’s last words and to the witness of his entire life, we too, as an ecclesial community, want to follow in his steps and to commend our brother into the hands of the Father," Francis said at the end. 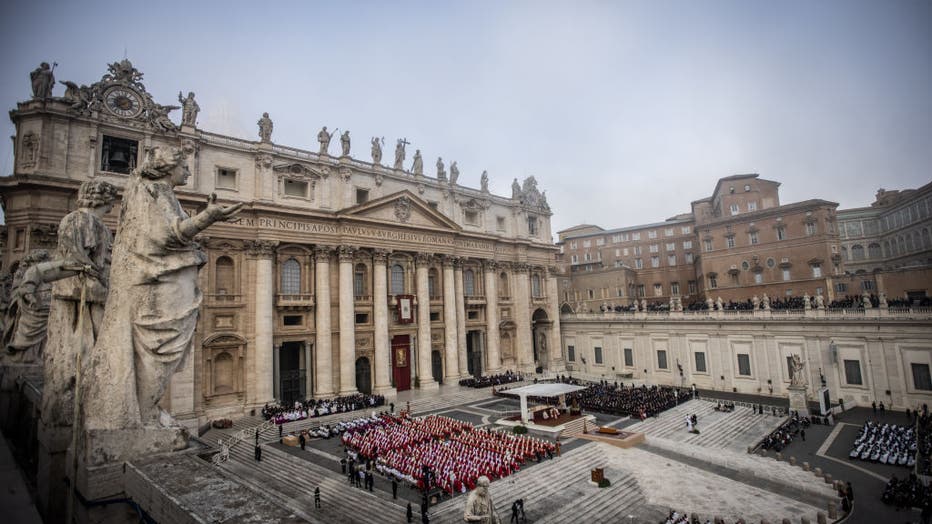 During St. John Paul II’s quarter-century as pope, Ratzinger spearheaded a crackdown on dissent as prefect of the Congregation for the Doctrine of the Faith, taking action against the left-leaning liberation theology that spread in Latin America in the 1970s and against dissenting theologians and nuns who didn’t toe the Vatican’s hard line on matters like sexual morals.

His legacy was marred by the clergy sexual abuse scandal, even though he recognized earlier than most the "filth" of priests who raped children, and actually laid the groundwork for the Holy See to punish them.

As cardinal and pope, he passed sweeping church legislation that resulted in 848 priests being defrocked from 2004 to 2014, roughly his pontificate with a year on either end. But abuse survivors still held him responsible for the crisis, for failing to sanction any bishop who moved abusers around, refusing to mandate the reporting of sex crimes to police and identifying him as embodying the clerical system that long protected the institution over victims.

"Any celebration that marks the life of abuse enablers like Benedict must end," added the main U.S. abuse survivor group SNAP.

The funeral ritual itself is modeled on the code used for dead popes but with some modifications given Benedict was not a reigning pontiff when he died.

After the Mass, Benedict’s cypress coffin was being placed inside a zinc one, then an outer oak casket before being entombed in the crypt in the grottoes underneath St. Peter’s Basilica that once held the tomb of St. John Paul II before it was moved upstairs.

While Thursday's Mass was unusual, it does have some precedent: In 1802, Pope Pius VII presided over the funeral in St. Peter’s of his predecessor, Pius VI, who had died in exile in France in 1799 as a prisoner of Napoleon.